I intend to build the collection over the next couple of weeks and then add to it as I get new images. 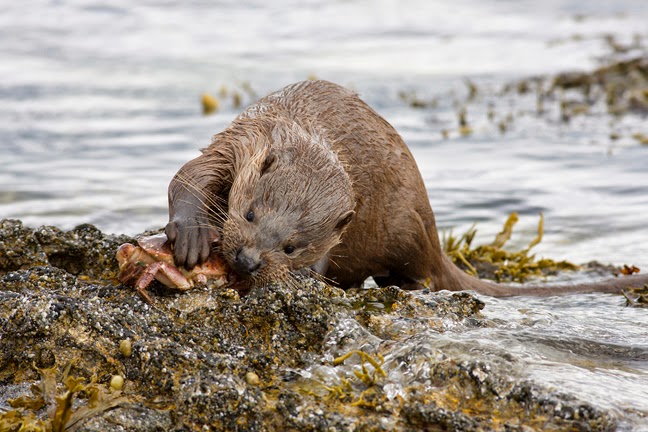 Shame on Malta - Please Read This.

Maltese hunters continue to pile shame on their country, as does the Maltese Government for allowing the hunting of migrating birds. Chris Packham is out in Malta highlighting this barbaric hunting practice. This isn't a new problem, but each year it piles more pressure on migrating birds. I visited Malta back in the early 1980's and during that trip I witnessed bird hunting at first hand. I ended up having a very heated conversation with two dodgy characters who were bird liming (bird lime is a sticky substance that traps birds when they step in it). I have since refused to visit the island, but maybe going back there to help support the guys who are trying to stop the hunting is a better idea.

I have written to one of my local MEP's, but that resulted in an email saying she is too busy to read it until June. I wonder how many more birds will be shot by then.

Chris Packham is producing videos during his trip to the islands this spring, which can be found HERE. These videos show just how organised the hunters are and that the hunting is being carried out  on an almost industrial scale. If you can afford it, please donate to the appeal for funds to help fight this disgusting practice. The appeal for donations was launched by Birdlife Malta and details of the appeal can be found HERE.

Of course this is but one problem for migrating birds and the leaders of Britain need to do their bit and help to prevent much of Britain turning into a bird less zone. A walk around farmland in Britain can be quite depressing with the highlight often being a few Pheasants and Red-legged Partridges - both introduced species for shooting!
Posted by Carl Baggott at 19:44 No comments:

I posted a couple of images of a nest full of Raven chicks just over a week ago and yesterday they were preparing to fledge. The largest of them was making short hops about the rock face, so I wouldn't be surprised if he takes his first real flight today. The Raven was revered by some in ancient times and  other cultures feared them. I can understand both as they are clearly quite intelligent, but when they fix you with one of their dark looks who knows what they are planning? For me they conjure up thoughts of wild places. I often hear their distinctive calls when high-up in the Scottish mountains enveloped in cloud. They follow close by seemingly mocking me and maybe hoping to lure me into making a fatal mistake.

I recently read the colour-ring on my 300th gull at Shawell. A first-summer Common Gull was the prize winner. This was a good record because the codes on the smaller gulls are really difficult to read due to the distance involved. Common Gull (J4ET) was ringed near Bergen, Norway during September 2013.

I have been up early the last few mornings and as a reward I've enjoyed a great view of a Barn Owl and been delighted by a family of Ravens. The Raven surely must have a claim to master of the skies. Their skills are incredible, how many birds can you watch doing synchronised barrel rolls with their partner. I am sure I've even seen them flying backwards.

The Barn Owl appeared just after sunrise in a tree near to where they have bred in the past. The sun was only just breaking the horizon - the golden hour. I managed few quick photos before it disappeared into a hole in the tree. A couple of Jackdaws came out very fast after the owl went in, so I guess this is only a roosting hole.

A Lesser Black-backed Gull  (Green MAFB) was colour-ringed in the Netherlands during 2007 and fitted with a satellite tracker. Steve Nicholls and I saw this bird on March 29th 2014.

Kees Camphuysen has kindly passed on its life-history and amongst the information was a map of one of its winter journeys. The satellite tracker no longer works, but it has done its job. We already know that many Lesser Black-backed Gulls migrate south to Iberia and across to NW Africa, but it is great to see the whole journey represented on a map.

It's fascinating how one gull (MCAV) chooses to winter in England, but others like MAFB undertake much longer southward journeys. 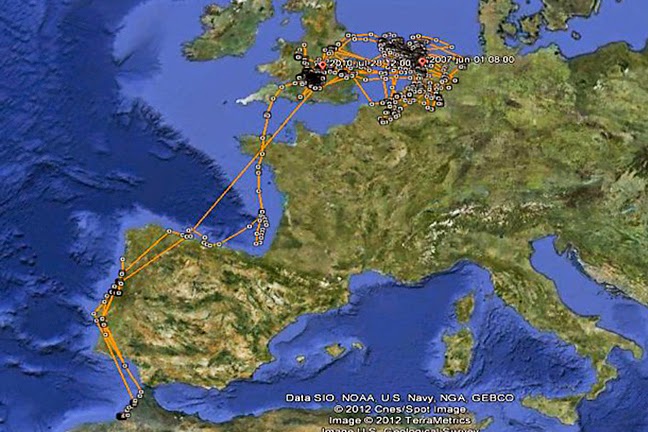 Posted by Carl Baggott at 18:00 No comments:

A little while ago I wrote about the Peregrinations of MCAV, well the data logger fitted to this LBB Gull has revealed its movements during the winter period of 2013/14.  Kees Camphuysen has kindly forwarded me the information, so I thought I should share it as it is really interesting. I will follow this post with one about another LBB Gull from the Netherlands, which has a satellite tracker fitted and that one migrated south.

Lesser Black-backed Gull MCAV has re-appeared in the breeding colony where its data logger was fitted. Kees reports that MCAV is now established in the colony and is territorial with a partner. The base station is close to the colony, so the data held by the logger was automatically downloaded as soon as MCAV arrived back.

The information confirms my sightings of it at Shawell on March 12th & 13th 2014. The maps below show its wanderings, firstly to Britain and then to the Shawell A5 Lagoons, Cotesbach LF site, Draycote Water and finally Albion LF site (NW Leicestershire).

READ MORE
Posted by Carl Baggott at 07:30 No comments:

After dashing off to see the Glossy Ibis the other night, it felt rude not to go for the Pied-billed Grebe at Rutland Water. Having seen a few Pied-billed Grebes in the past it took me a while to get into twitching mode, but once I did I was off like a Greyhound. Well like a snail would be more accurate, because someone blocked Rutland Water to me by putting Leicester in the way. It is always frustrating how long it takes to cross Leicester.

I got to see it yesterday morning and luckily it was one of those easy twitches where the bird is on show immediately. A first for Leicestershire & Rutland and it just casually swam around in front of its admirers. It was a bit too far away for photography, as the crowd was keeping well back. Nevertheless I was able to get a few records shots of it by using my scope as a lens. Not the greatest birding adventure I've ever had, but it was good to get a rare bird at Rutland Water, as they often time their arrivals for when I'm on holiday.

Having previously missed the Glossy Ibis at Rutland Water , I was excited to learn of another one and this time in Leicestershire rather than Rutland.

I left work just before 5 o'clock, casually eat my tea at home and then drove to Hicks Lodge. Luckily the Glossy Ibis was still present, although a little distant. Below is a poor quality screen grab from a short bit of video I managed to record. As well as the ibis, we spotted a Little Ringed Plover with quite a few white feathers on its wings and mantle. The white feathers didn't stop the other bird displaying to it however.

Just before 7 o'clock the ibis took off without warning and flew off in a north-easterly direction eventually being lost to view.

I had a quick walk around Croft Hill and Quarry this morning. The exercise was good but the much hoped for migrants were in short supply. A singing Blackcap showed well as did a Willow Warbler, but other than that it was quiet.

Lots of gulls were in the area, but they were not visiting the A5 lagoons in large numbers.

Amongst a group of Common Gulls was a splendid adult Mediterranean Gull. It stayed only for a short time, but long enough for Steve Nicholls to arrive and get good views of it. The images below were taken using a DSLR camera attached to my scope - not easy as the camera isn't able to auto focus.