The timing of my arrival at Shawell mid-week was spot on. I always enjoy it if I get the opportunity to time my lunch break to co-incide with me being near Shawell. This week a massive wave of gulls came rolling in from the nearby landfill site just as I arrived. At least 18 Yellow-legged Gulls pitched down amongst the 1000+ gulls. However, the icing on the cake was what appeared to be a first year Caspian Gull. 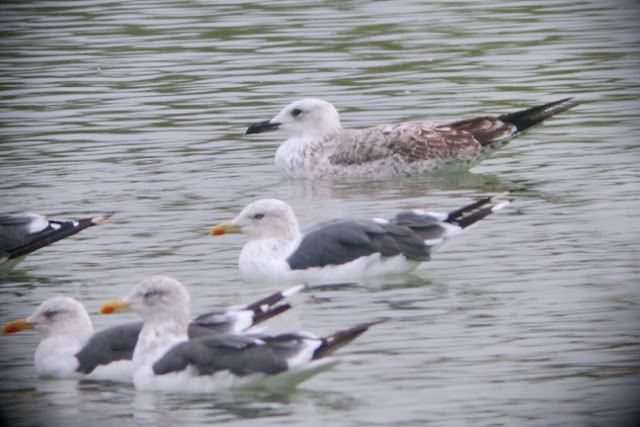 The main stand out features are its very long and flat backed profile and its white head. It has already replaced its mantle and scapulars feathers with pale grey ones with faint dark markings. The black marks on the same feathers on the young YLGs are much more distinctive. Its coverts are brown with very little else apart from pale edges. Its tertials are typical for this species showing the white 'finger nail' pattern at the tips.

Its bill is not exceptionally long or thin, but this is typical of this age. Once the feathers near the bill start to wear the bill should take on a longer appearance.its head doesn't look that small, but it is probably OK.

It is possible that this is an odd michahellis, but the overall impression on the day that it was more likely to be a cachinnans. This is based on its long winged flat backed profile; the subtle marked grey mantle; its white head and the tertial pattern.
Posted by Carl Baggott at 21:06 No comments:

Another good day at Shawell

A clear blue sky greeted me yesterday morning as I set off to Shawell, but mist soon hampered my progress. By the time I arrived at Shawell the morning mist had thickened considerably leaving me no option but to have a snooze in my car. The gulls had somehow managed to navigate from their night time roost site, as once the mist began to clear I could see thousands of them on the bank opposite me. At first the visibility was too poor to identify the species, but as it improved I managed to spot the second-winter Caspian Gull I first saw on Wednesday.

As you can see the stand out feature is a small white head and a longish thin parallel sided bill. The plumage is typical of a second-winter: a grey mantle and a mostly grey median covert bar on the closed wing. The greater coverts are mainly dark greyey brown and the lesser coverts are brown and dirty white with a slight chequered pattern. The tertials generally stand out as being blacker than other similar species at this age and the white tips show a finger nail type pattern. As you can see this gull shows the typical tertial pattern. The tail had a lovely black band across its complete base. Its legs don't look exceptionally long in the photo above, but in other poses they look thin and long. It can be difficult to assess leg length and shape from photographs, as they can alter from one photograph to the next. The thinness is often only obvious when the gull is facing you, as their legs are not round. Its 'Persil' white head stood out a mile amongst all the other gulls.

I had a great day searching for colour rings, as several thousand Lesser Black-backed Gulls were present. In the end I read 26 colour-rings including some for the first time. Many of them were intermedius LBB Gulls from Norway.

The colour ring on the one below was a challenge to read, as the ring was obviously quite old and starting to wear. It looked like KLAS. This is from the Netherlands.

There are still plenty of Yellow-legged Gulls at the site although fewer first year birds than last weekend. They are not quite so easy to identify now as the juvenile Herring and Lesser Black-backed Gulls are moulting their scapulars and mirroring some of the features that helped separate the young YLGs only a few days ago. Generally the YLG have whiter heads and shorter, thicker and blacker bills, but it can be fun.

A large third or fourth winter YLG caught my eye at the lagoons and stayed around for a while.

Posted by Carl Baggott at 07:59 No comments:

I spent a short while at Shawell at lunchtime today and amongst several thousand gulls was a nice second-winter Caspian Gull. As normal the falconer was there so the gulls were quite distant. Taking photos of gulls at this range with a strong breeze blowing is quite a mission, but I was able to get a few record shots. 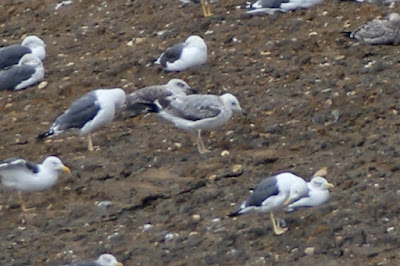 The 70 x magnification, or power as the Americans seem to say, of my scope makes it possible for me to read colour-rings at distances of up to 400 metres if the codes are clear. One of my old (less of the old) favourites was there today - third calendar year Lesser Black-backed Gull C+F.  I have now seen C+F on 14 separate occasions. C+F is almost in adult plumage now, which is quite a transformation  from what he looked like back in January - see HERE
Posted by Carl Baggott at 21:08 No comments:

I have been working hard this summer at Shawell to pick out a juvenile Caspian Gull, but it has not gone to plan! In July I thought I'd got one, but that one turned out to be most likely a hybrid. Another one in August proved to be even more challenging. On Facebook's European Gulls it was given the thumbs up, but its coverts were quite fussy. I would like to see the coverts being a bit plainer. That said I favour Caspian Gull rather than a very skinny long legged Yellow-legged Gull.


Yesterday I spotted a young Caspian Gull, but rather than a pristine juvenile it was well on its way to its first-winter plumage. It was at least 200 metres away, so my camera struggled to record a prize winning shot. Nevertheless you can see that it has a grey saddle. Most of the mantle and scapular feathers have been replaced with pale grey feathers. Faint dark markings are visible on most of the scapulars, but
these are much less distinct than those of the first-winter Yellow-egged Gulls that are present at the moment. Its coverts are plain brown with fine pale edges and the inner greater coverts are solid brown with faint buff edges. Its tertials had white thumb nail like tips, which again is different to YLG's of a similar age. Its head was white with no sign of a dark mask.

Below is a similar looking gull from December 2014.

Another juvenile gull was causing quite a stir, as its white primaries seemed to scare the other gulls. Its a good job its not a young Herring Gull, as it might be mistaken for a 'white-winger' as an adult. 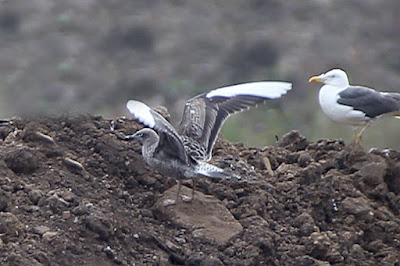