It's been a great couple of months for enjoying the young Caspian Gulls at Shawell. These are the vanguard of a major range expansion of this species. Herring Gulls need to watch out or they will find themselves pushed out.

A juvenile Caspian Gull was a major prize a few years ago, but now you could reasonably expect to see one anywhere gulls gather in large numbers in England. Of course you need to have done your work to understand how to identify them.

The window of opportunity is quite tight, as they begin moulting almost as soon as they have made it here. In fact most have replaced a few scapulars by the first or second week of August. By mid-September some are in almost complete first-winter plumage. This is one of the ways of helping to distinguish Caspian and Yellow-legged Gulls from Herring and Lesser Black-backed Gulls in their first few months. However, by mid-September quite a few of them are moulting too although they still look fresher. Caspian and Yellow-legged Gulls are born about a month earlier than the other two.

A Juvenile Caspian Gull's plumage is quite dull. The one below is typical of what to look for: very little patterning on the greater coverts (GC from now on). The inner GC are plain dull brown and the outer GC are a mixture of off white and brown. The darker inner GC often appear similar to the Nike swoosh logo. The median coverts (MC) and the lesser coverts (LC) are plain brown with buffish edges (if you don't know the feather tracts I'm talking about just enjoy the pictures). Of course the small head, long legs and the long winged appearance all help.


The one below shares all the feature of the one above and has a real dagger of a bill. Caspian Gulls love to just sit about.


The next one was quite distant, but you can still see the general plumage features and the washed out brown colour really shows well in this image. The whiteness of the head is a helpful although only when seen in conjunction with the rest of the features. The hanging rear belly is another feature of Caspian Gull, but it's not always like that and they can lose it two seconds after you see it.


By early September some of the scapular feathers have been replaced and a greyness starts to appear. The coverts still show that plain dull brown colouration.


You can clearly see the replaced scapulars on the next one

The next two images are of a German ringed bird X454. This one is a little trickier because it often looks a little short legged and dumpy. Not all the time though and care has to be taken with judging Caspian Gulls jizz, as they are very good at being shape changers. As you can see it has already moulted some of its median and lesser coverts, which is very good Caspian Gull pro feature. Its juvenile coverts are all OK, as are its tertials. I will give it the benefit of the doubt, but with the proviso that we watch it develop - good things these colour rings. Not all Caspian Gulls are sleek with a long straight bill and super long legs.


X739 is a smart looking bird although my photo hardly does it justice. As you can see this one has moulted its scapulars, but none of its coverts yet.


The next one a first-winter has moulted its mantle and scapular feathers plus a few median coverts and is the most advance one I've seen so far.

I had a great day at Shawell today - 32 colour-rings read and six or seven more Caspian Gulls found.

The highlight amongst the colour-rings was a crop of juvenile Lesser Black-backed Gulls: two from Norway, and singles from the Channel Islands, Denmark, Germany and The Netherlands.

An obvious Caspian Gull hybrid from Germany was also interesting.

Here's my favourite Caspian Gull of the day:

I had an hour after work at Shawell yesterday and three of the Caspian Gulls that I saw last Saturday were still there. This beast is a real smart creature - and a real bully.


I have now seen 49 different Caspian Gulls (give or take a few, as some duplication is inevitable especially as the juveniles age and alter their appearance).
Posted by Carl Baggott at 21:38 No comments:

Whilst I was in Scotland a couple of weeks ago I took a visit to Burghead and I was pleasantly surprised to find about 90 Kittiwakes roosting on the seaward side of the Harbour wall.

Amongst them was a juvenile with a series of uncoded colour-rings. After a bit of detective work I managed to find out that it had been ringed at Finistère, Brittany, France on July 5th 2017. This is quite an impressive northward dispersal from its natal colony. I also learnt that it's mother has reached the ripe old age of 22.

The Kittiwakes proved to be very photogenic especially the juveniles. 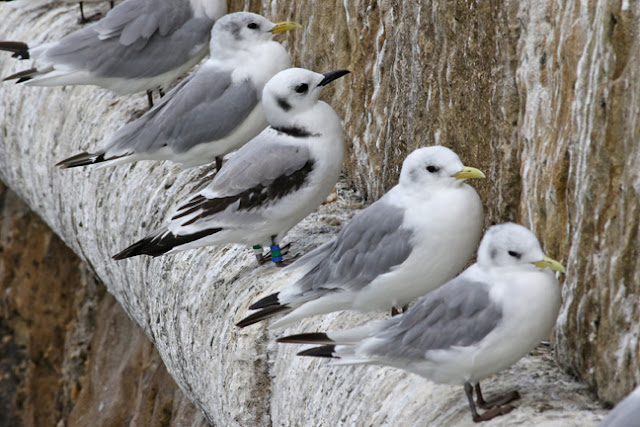 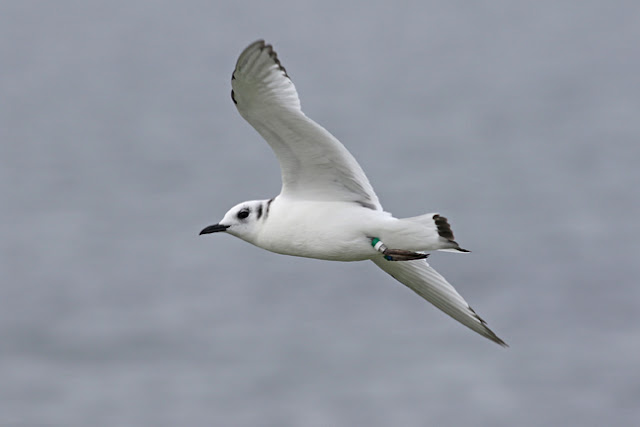 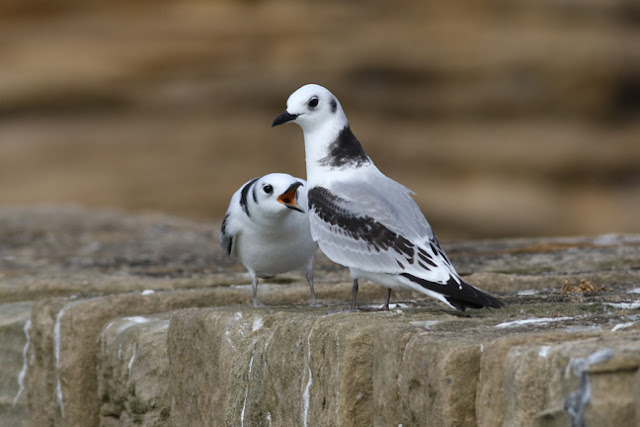 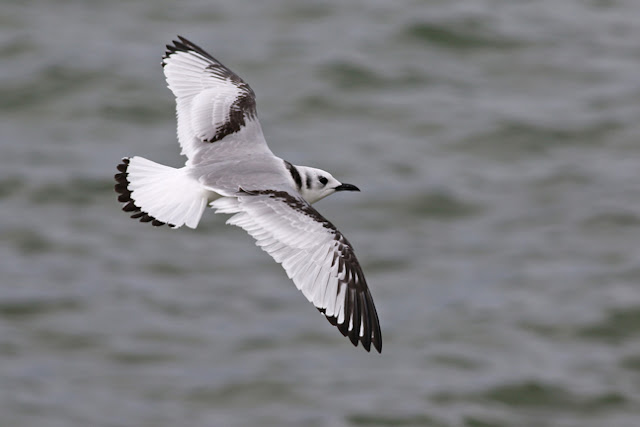 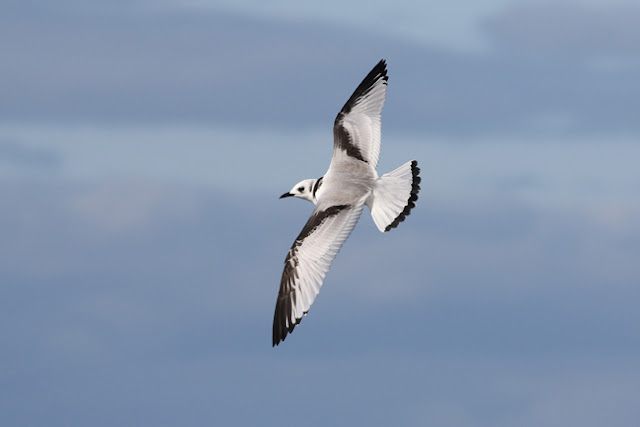 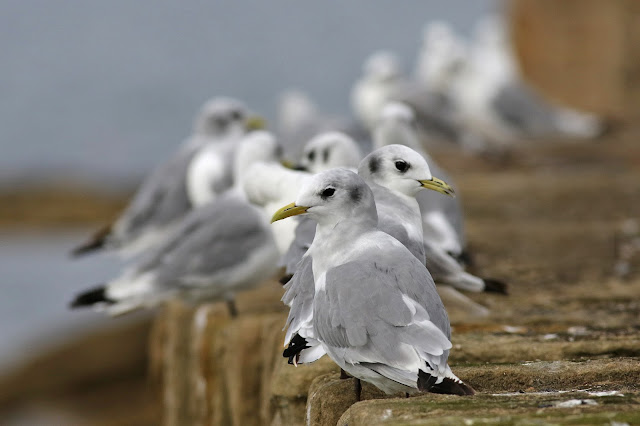 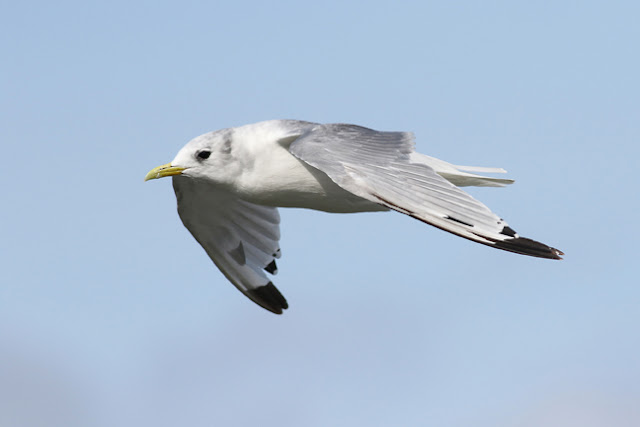 It has been another busy two weeks. I was in Scotland on holiday last week so no time for blogging and this week has been all about catching up and becoming a Grandad!

I managed to steel a few hours at Shawell today and what a session I had. Three colour-ringed Caspian Gulls were the highlight, but in total I had ten Caspian Gulls. Seven juveniles that were all moulting into first-winter plumage, but still very juvenile like and also three second-summers/winter.

The first Caspian Gull in the video is the one with the bi-coloured bill (black tip pink base) the other two are fairly obvious: the one with the yellow colour-ring and the one on it's own.


Two of the colour-ring Caspian Gulls were from near Bad Duben and the other one from Grabendorfer See - Germany.