The Reappearance of HD430

Back in mid-August I read the colour ring on a first calendar-year Yellow-legged Gull at Shawell. I identified it in the field as a Yellow-legged Gull, but noted it was very fresh looking. I saw it again yesterday at Shawell and it has now moulted into classic first-winter plumage.


There is up to 12 Caspian Gulls in the area including colour-ringed bird X477, which has been seen regularly since 9th September.


I was surprised to find a Common Gull still in juvenile plumage this late in the year. All the other first calendar-year Common Gulls were in first-winter plumage.

Gulls in The Algarve October 2017

Steve asked about the gulls after my trip report to Portugal didn't mention any.

Portimao has a large fish harbour, which of course attracts many gulls throughout the year. The temperature during my trip regularly reached 35 degrees C +, so maybe this was the reason there were fewer gulls around than normal. It appeared that the Lesser Black-backed Gulls had not arrived in big numbers.

That said on my first visit I noticed an 3cy Azorean 'type' Gull peering down on me from the rooftop. This is my Azorean at the portico fish harbour, but so far no decision has been made on the previous two, so I will wait a while before documenting it fully. The light was very bright, so it was difficult to reproduce the correct grey tone of the upperparts. 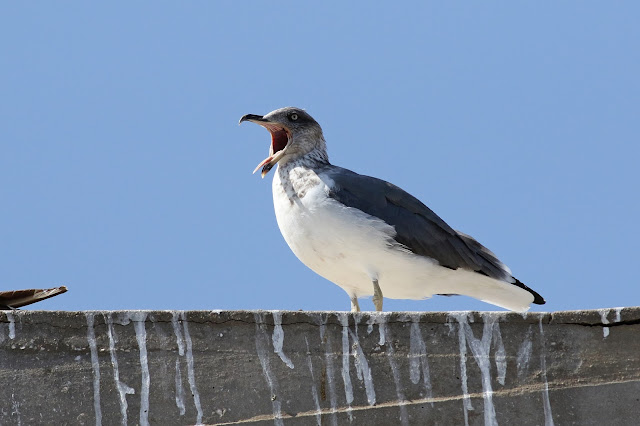 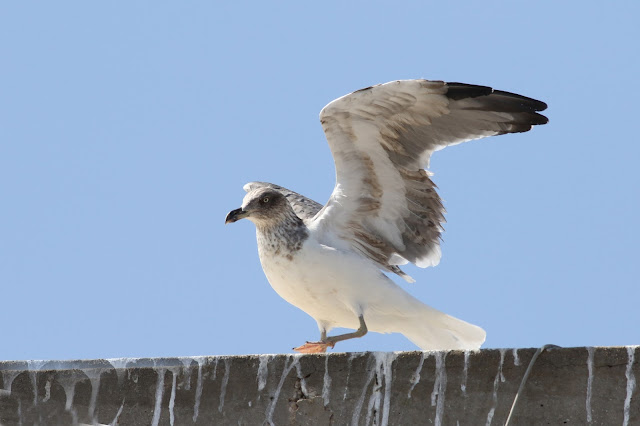 Many of the Yellow-legged Gulls frequenting the harbour and the beach where we stay at Praia da Rocha are ssp. lusitanius. 1cy michahellis are more advanced in their moult having also moulted some coverts by October. Lusitanius 1cy can be told by the lack of covert moult and usually their small size. It is easier in January/February when the differences are more obvious.

Amongst the Lesser Black-backed Gulls that had arrived I recorded colour-ringed birds from England, France, The Netherlands, Norway, Scotland and Wales. There were also some that had been ringed in Portugal.

As well as the big gulls we did come across nine first-winter Slender-billed Gulls near Faro. 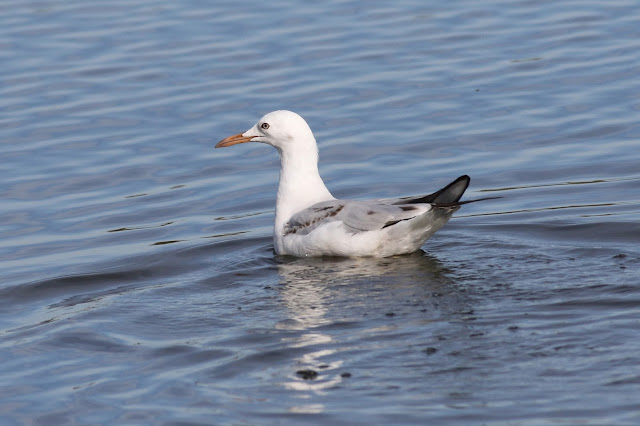 And of course a few Audouin's Gulls and some Med Gulls but these were shy this time around.

Posted by Carl Baggott at 10:00 No comments:

At Shawell today I dropped straight back into the groove.

Four German ringed gulls from the mixed colonies. Three looked good and the other was the hybrid mentioned above.

One was a new 2cy bird which posed nicely.

In addition I read an impressive 36 colour-rings.

Posted by Carl Baggott at 22:16 No comments:

I have just come back from another trip to The Algarve. This time we decided to make an attempt to see as many species as we could. My previous highest trip total was 135 species.

The first day is always a chilled out affair with a nice walk around Praia da Rocha and Portimao. Five Pied Flycatchers and a single Spotted Flycatcher in a small park were good, but the highlight was a Caspian Tern right by the road bridge over the River Arade.

We picked up our small hire car the next morning and I decided to head to the raptor watchpoint at Cabranosa which is close to Sagres. Just beyond Cabranosa is Cape Vincente, where, during the right conditions, raptors and other migrants are funelled down to the land's end of Europe. Many of these birds are juveniles that haven't learnt the correct route to the short sea crossings from Spain to Africa. Birds were passing overhead. Ten Booted Eagles, a Short-toed Eagle and two Egyptian Vultures were joined by a couple of Black Storks. A Hobby was a first ever in Portugal for Dawn and I and a Mistle Thrush was a good bird to get under our belt.

The Ria Formosa area always produces a good count. A full day in the area should produce about 70 species. Arriving before it got light was a good plan as two Tawny Owls were calling by the golf course. A Garden Warbler was another good one and we soon added a male Little Bittern to the tally. At the west end of the Ria Formosa Natural Park we ended up with a total of 70 species. On the other side of Faro is a small reserve in the Natural Park that we last visited during our first trip to Portugal in 2013. The prize here was a Red-necked Nightjar that we accidentally flushed. It flew around us only just off the floor. The sun highlighted its lovely rufous colour. It landed but just behind a hump. It then flew once more before alighting under cover and out of view. At this point we left it, but we were very happy indeed. The day finished on an impressive 80 species and a total of 90 for the trip.

The next day we received a text from Georgina (our daughter) saying Monarch Holidays who we were travelling with had gone bust. Ah well we said that is a problem for another day. The uplands at Monchique beckoned and so we put our worries aside and headed off uphill. Woodland species are on offer here and we picked up some good ones including a Long-tailed Tit. We walked up one of the taller peaks called Picota. The forest shades out the sun for most of the walk but near the summit there is no hiding from the sun and it was very warm. We sat looking down to the forest below when I noticed a large raptor flying below us. It was a big one and as soon as I got my binoculars on it I called juvenile Spanish Imperial Eagle. Watching birds of prey from above is always special. A juvenile Blue Rock Thrush and several Dartford Warblers also helped move the list on. After a pleasant walk downhill it was time to drive up to the highest point called Foia. This hill is over 900 metres tall and is the highest point in The Algarve. Here we enjoyed drinks and an ice cream. A juvenile Rufous-tailed Rock Thrush had been seen a couple of days before and I was hoping it was still around. There was no sign of it around the summit, but I eventually found it on a rocky outcrop slightly downhill. I had lost Dawn by this point to her reading book!

The total had now reached 118 species.

Tuesday is traditionally Castro Verde plains day and so why change. It was very hot inland and that reflected in the lack of birds. At Guerreiro a couple of juvenile Bonelli's Eagles were roosting: one on a rock and the other on a fence post. A few Calandra Larks were song-flighting and 20 Black-bellied Sandgrouse flew over. No bustards were visible. Most of the day was spent searching for bustards and eventually we found nine Great Bustards. A Tawny Pipit was a good find and six Griffon Vultures passed over in a line.

The total was now 132 and close to our previous best.

A trip to Salgados Lagoons was sure to get us some new birds. This site is the best place to find Yellow Wagtails (presumably Iberian) and it didn't disappoint. A female Ferruginous Duck was an excellent find and that one drew us level with our previous best trip total.

By the end of the day we had reached 140 species and we were only half way through the trip.

The Sagres Bird Festival had begun and I had booked on a Pelagic Boat Trip. Fewer seabirds were around than in previous years but still those onboard enjoyed close views of Cory's Shearwater and European Storm Petrel. We also saw Great and Balearic Shearwater.


After the boat trip I dragged Dawn from the Cafe at the harbour (she doesn't like small boats) and we headed to the raptor watchpoint at Cabranosa. Before venturing up to the viewpoint we enjoyed our sandwiches and I noticed a group of large birds of prey. I could see 20 or more Griffon Vultures and amongst them were two slightly smaller vultures. These two lacked the contrast across the wing that Griffon Vultures show and they were immature Ruppell's Vultures a new bird for me.


There is a large pine forest at Cabranosa, so after the birds of prey passage had quietened down we went for a walk. In the forest small migrant birds were trying to find shade. Our first Redstarts of the trip made themselves obvious as did lots of Iberian Chiffchaff contenders. A juvenile Ring Ouzel looked slightly out of place in the forest.


At the end of the day the total had reached 147 species.

The lure of Cabranosa's raptor passage was too much and so we returned the next day. A Lesser Spotted Eagle (Clanga pomarina) had been seen the previous week, so when it or another reappeared all those present were very very happy. Amazingly we also picked up a second year Pallid Harrier.

Next day we birded the Ria Formosa area near Faro in the morning and then went up in to the hills above Faro. A couple of Wood Pigeons was a major find near Ludo Farm. In seven trips to The Algarve this was our first record of Wood Pigeon.

It was back to the Monchique area on Sunday to look for some of the species we had missed on our first visit. An adult Hobby whizzed over us as we were sorting ourselves out ready to set off walking. We had missed Iberian Green Woodpecker the first time, but managed to catch up with one this time. A Grey Wagtail was a good one feeding on the road on the wooded slopes of Picota. Large butterflies always fly around the bushes on the top of Picota. The Two-tailed Pashas are my favourites.


In the afternoon we tried our luck again on Mount Foia. Loads of large dragonflies were hunting, but none allowed close approach. I decided it would be worth walking downhill to a small reservoir, but we didn't find the identity of the dragonflies. However, we did see a Hobby catching dragonflies and later on another two or three. About 20 Ring Ouzels were also seen

For our last full day of the trip I couldn't resist dragging Dawn back to Cabranosa for one last raptor festival. We weren't disappointed as the Lesser Spotted Eagle reappeared and showed well. We even saw a late Bee-eater and a couple of Turtle Doves.


This gave us a grand total of 163 species for the trip. We had missed a few that we usually see but I am really happy with the total. The Algarve is a superb birding destination - well worth a visit.

Back to Monarch, we had absolutely no problems and waiting on the runway to bring us home was a Boeing 777-200. The American crew were a pleasure to fly with. My only complaint was the flight was too short to finish watching the complimentary film!
Posted by Carl Baggott at 21:13 3 comments: