After the excitement of the Siberian Accentor, my only avian adventure this week was half-an-hour at Shawell on Wednesday lunchtime.

Several thousand gulls were at the A5 Lagoons and more 'waves' were continually arriving. You need to visit Shawell and see a mass arrival of gulls coming from the landfill site to fully appreciate a 'Wave of Gulls'.

Sometimes there are so many gulls on the lagoons that it can be difficult to sort through them. Luckily I spotted a new Caspian Gull amongst the hordes. It is either an advanced third-winter or a third-summer/fourth-winter. The large white mirror/tip on P10 is a useful feature for separating Caspian Gulls of this age from Herring Gulls, as is the white tongue also on P10 just visible near the tertials. 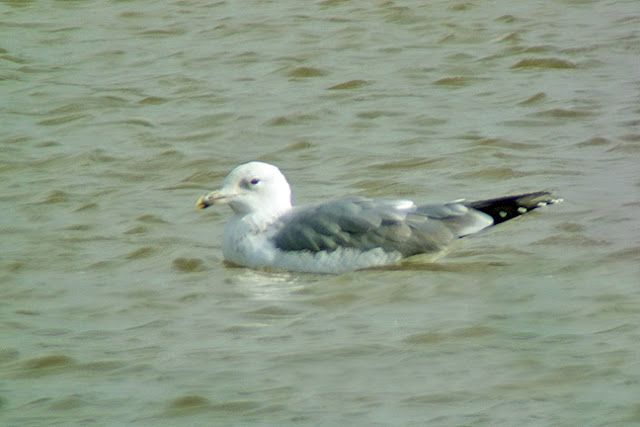 An adult gull caught me eye, but this one was more difficult. It showed, in my opinion, mixed features of both Caspian and Herring Gull. Its longest primaries (P10) was similar to a pure Caspian Gull although a little odd looking. It had pale yellow eyes with no obvious dark specks. Its bill was long, but a bit bulbous near the tip. Its legs work long and it often stood very Caspian Gull like.

Posted by Carl Baggott at 21:55 No comments:

What an amazing autumn we are having! Best ever?

Last Friday I ventured out from the safety of my hedge at Shawell and tried to twitch the Eastern Crowned Warbler at Bempton Cliffs. This didn't go well as the bird had disappeared overnight. I had a good day, but I felt well and truly gripped off by being told at least half a dozen times that it showed really well the day before. Perhaps this is normal amongst the new crop of twitchers, but back in the day that wasn't considered good behaviour. You might have had a bit of sport with close friends, but you didn't do it to perfect strangers who hadn't seen the bird, or at least I didn't.

I thought that was it for a while, but I did show an interest in the record of a Siberian Accentor on the far away Shetland Isles. I felt for Colin Green and Dave Gray who had been on Shetlands just prior to the bird being found. A similar event happened to me when I went to Shetland once. That time it was a Caspian Plover.

Well on Thursday afternoon I was amazed when I read that another Siberian Accentor had been found at Easington, East Yorkshire. I couldn't take another Friday off work could I? It was too good a bird to miss, but I was worried that it might have disappeared overnight. I decided to go into work early and hope that I could get the most important things done before the first news broke. In the end good news broke before I was ready. I pulled my finger out and got on the road at 08:00 and I arrived at Easington just before 11:00.

The initial rush for a view was over and I just casually walked up and got a place in the front row. The Siberian Accentor was completely oblivious to its audience. At times it was only a couple of metres away from us. It was picking up small insects from the moss that carpeted the corner of the car park it favoured. The light was quite poor due to overcast skies and the shade of the large trees above it. Luckily my camera works well at high ISO settings. These images were taken at either 1600 ISO or 2000 ISO.


The Shetland bird was the first for Britain and this one is the second. Amazingly another was found today in Cleveland. The total for Northern Europe this October, up until yesterday, was 35, but that total will surely increase to over 40 if it hasn't already done so. I wouldn't bet on some more being found in Britain.

The area around Easington and Spurn was awash with birders. After following the crowd for a bit I went off on my own. I didn't find any rarities, but I saw some good birds. The highlight was perhaps the Merlin I spotted flying across a field. I was thrilled to see it alight on top of a small bush, which allowed me to eyeball it through my scope.

It was good to see through social media that Colin and Dave had seen the little beauty.

On my way back from Northampton yesterday I called in at Shawell A5 Lagoons and there was plenty of gulls there. Amongst them was a Caspian Gull in first-winter plumage or probably more accurately in post juvenile moult.

It wasn't the one I've seen on three occasions recently - see previous post. That one had a blacker bill and a different looking set of wing coverts.

The greater coverts are a bit fussier on this one than some examples, but well within the normal variation. Previously the thinking was that they should be very plain muddy brown. However, why would Caspian Gulls be different to the other large gull species, which show a great deal of variation.

The first-winter Caspian Gull I first saw on September 28th was still in the Shawell area yesterday.


I initially saw it distantly in the sand quarry and then later on it appeared at the A5 Lagoons. Digiscoped shots don't really do it justice, as it is a really smart looking young gull. It is in post juvenile moult at present, but by the time winter arrives it will be one of the really posh looking first-winters which really stand out in a crowd.