After a few days absence the third-winter Kumlien's Gull reappeared at Shawell today. However, before its reappearance the adult Glaucous Gull I first spotted on January 4th put in an appearance. It was only seen by one other though and many visitors left empty handed. It can be difficult for people to pick up the birds amongst the flock on the water.

An impressive total of 18 Caspian Gulls kept things ticking over and many of the visitors at least saw one of those.

The Kumlien's Gull appeared around lunchtime and stayed for a good while. The bright sun light made viewing the primary pattern difficult and it looked much paler today than on other occasions. 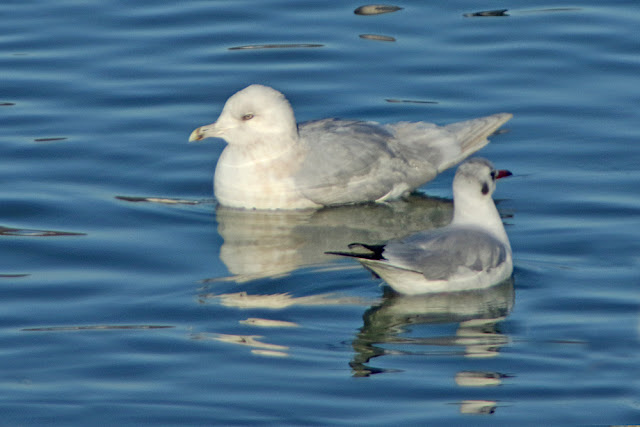 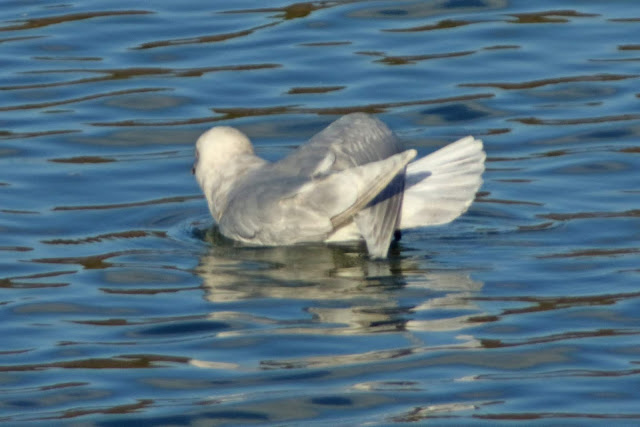 Posted by Carl Baggott at 20:56 No comments:

I went to work early today, so I could spend a little time at Shawell at lunchtime. Very soon after arriving I spotted what I initially thought was the regular Kumlien's Gull, but on close inspection I realised that it was a different bird. It is more heavily streaked on the head and breast than the other bird. At first glance it looks good for a third-winter with the amount of adult like grey mantle and scapular feathers, however, the extensive streaking on the head, breast and flanks plus the markings on the tertials suggests it's probably an advanced second-winter. Also the bill is very like a second-winter although there are examples of third-winters with bills like this. It had a similar looking primary pattern on the closed wing to the regular Kumlien's.

So, regardless of age this looks like a good Kumlien's Gull - That primary pattern of darker outers is obvious whereas a 'dark end' Iceland would show the same shading on inner prims too, probably even darker on the inner primaries.

Also note that the adult grey tones are similar to the Herring Gull whereas Iceland Gull glaucoides tend to be paler.

All said Kumlien's Gull is classed along with Thayer's Gull as an Iceland Gull.

Compare it with the regular bird: 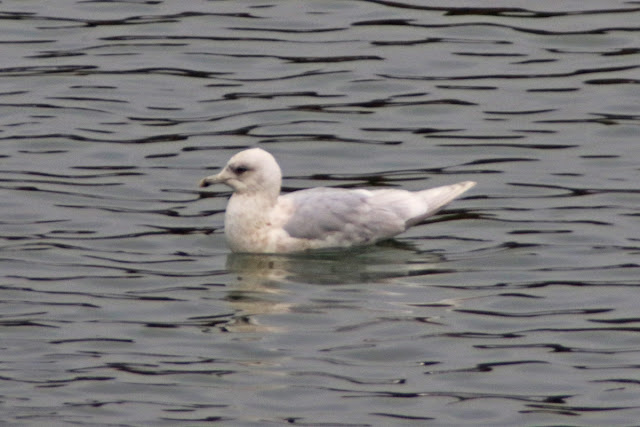 IF YOU DO VISIT SHAWELL, PLEASE PARK SENSIBLY FOR YOUR OWN GOOD AND DO NOT CLIMB OVER FENCES.

Posted by Carl Baggott at 18:56 No comments:

A quick visit to Shawell this morning revealed that both the pale juvenile Glaucous Gull and the third-winter Kumlien's Gull were still taking advantage of the food the landfill provides. A surprise first-winter Med Gull was also there.

The place wash awash with gulls, so hopefully a few more white-wingers will join the party.

The primary markings on the Kumlien's can be really obvious in dull light, but in the bright sunlight today it was harder to spot. Its eyes are pale, but not as pale as typical sub-adult Iceland Gulls - more of a honey colour in most lights.

In the photo below the subterminal bar on P9 is just visible. This became more obvious went in flew back on to the water.


The open wing image shows the darker markings on the outer webs of P10 to P7. A sub terminal mark is just visible on P9. I have read that the markings darken as the bird ages.

Posted by Carl Baggott at 20:55 No comments:

Another Saturday and another one spent checking the gulls at my favourite spot. With news of the 'white-wingers' spreading it was no surprise to see a steady stream of visitors today. It was of course great to see everyone and the new viewing area provided by Tarmac is helping to make everyone's experience a little better. Parking is still an issue though.

Birdguides enhanced the sites reputation this week by saying the following in the review of the week:

'With it being such a poor winter for white-winged gulls so far, Shawell in Leicestershire only exacerbated the notion that it is one of the country's top gull-watching sites when it produced Kumlien's, Glaucous and Iceland Gulls between Christmas and New Year'.

Today we had a great time with a few other species vying for our attention. As well the gulls, both a Common and a Green Sandpiper were seen and also a female Merlin.

The first 'white-winger' to appear was the third-winter Kumlien's Gull that I first found on December 28th. It's primary markings were a little harder to see, but they were just visible.
It's strange how different light conditions make such a difference.

The pale juvenile first seen on December 30th was seen briefly in flight and then later on it came down into the flooded sandpit.


Before the juvenile came on to the water an adult gull that I hastily identified as an Iceland Gull appeared. Reviewing the photos tonight I realised it is a small. probably female, Glaucous Gull. This is the 40th record of this gull species for Shawell. Note the large head and strong looking bill plus the short primary projection.

Review of the 'White-Winged Gulls at Shawell

We have now been watching the area around The Cotesbach Landfill site for 11 years. The landfill site attracts thousands of gulls on an almost daily basis, but it's the Arctic species that create the most excitement. Glaucous and Iceland Gulls can be seen in small numbers throughout winter and into spring. Occasionally a Kumlien's Gull is identified although they are very rare, but two were seen in 2019.

The number being recorded at Shawell/Cotesbach landfill site has increased in recent years. This is probably due to high numbers of gulls visiting the sandpit off Gibbet Lane. Previously, only a fraction of the gulls in the area visited the A5 Lagoons, but now more are being seen.

So when is the best time to search for these beauties?

Below are two graphs showing the months in which new birds have arrived. February and March are the peak times for Iceland Gull, but January is the best time to see Glaucous Gull at Shawell. Iceland Gulls can arrive well into spring. 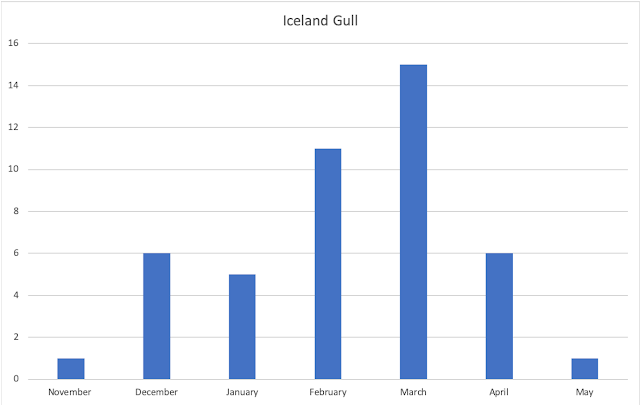 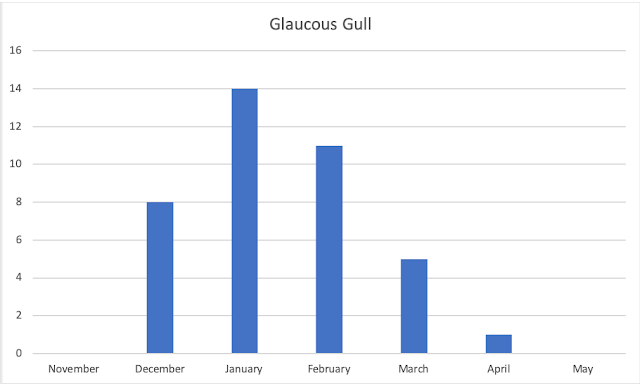 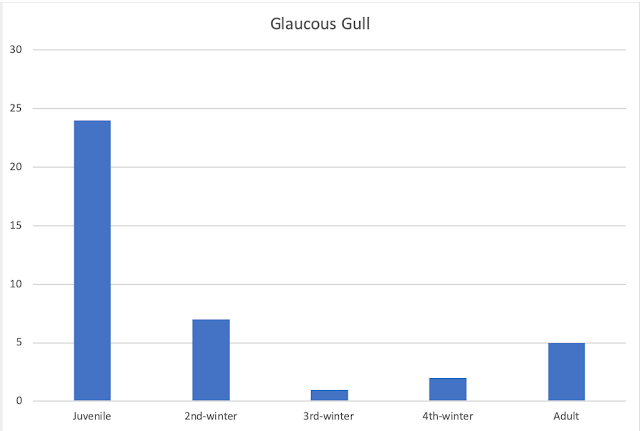 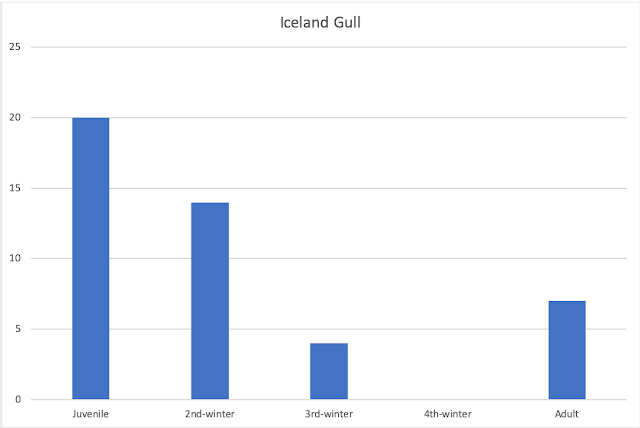 Identification is straight forward as size wise and structurally they are not at all similar, however, ageing is not so straightforward. Compare the brutish look of the Glaucous Gull below to the gentle features of the Iceland Gull. Iceland Gulls typically are obviously long winged and lack the tertial step of Glaucous Gull.

Posted by Carl Baggott at 20:31 No comments: