On Tuesday an immature scoter was spotted off the dam at Rutland Water. Its identity was revealed when it wing flapped and showed plain brown wings. Velvet Scoters have a white wing panel, so this bird was a first-winter Surf Scoter - a county first!

I was at work most of this week, so I had to wait until this morning to go for it. I thought I'd made a bad decision setting off early as it was very foggy on route. Luckily the fog wasn't too bad near the dam, although it was still very murky.

The Surf Scoter was still associating with a small flock of Tufted Ducks near to the shore about halfway along the dam. 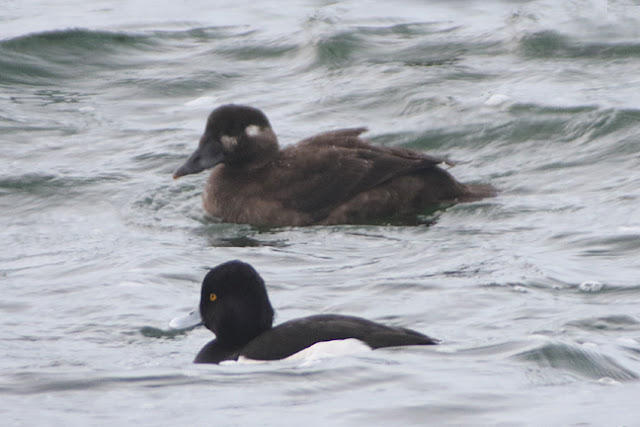 Posted by Carl Baggott at 15:30 No comments:

Since my last update I have visited Shawell a few more times. One of the highlights for me is welcoming back returning colour-ringed gulls. The Herring Gull pictured below returned to Shawell on December 17th. It was ringed in Finland in 2007 and since 2014 it has wintered at Shawell. Today I saw a Herring Gull that was colour-ringed near Kings Lynn. I have seen that one (1Z1B) ever winter since 2012. I also saw German ringed Caspian Gull (XNDJ) again today - that one has also been returning to Shawell regularly since 2014.


The A5 Lagoons are a bit hit and miss these days, due to disturbance from various creatures including a man who walks round the edge of the lagoons fairly regularly. I haven't caught up with him for a chat yet, but I will. As a consequence I have been devoting most of my time to watching the gulls at the sand quarry next to Cotesbach Landfill site. The good thing there is that all the gulls have there legs out of the water. As a result I get to read more colour-rings.

There are at least seven Caspian Gulls around at present: three adults, one 4CY, two 3CY, one 2CY and one 1CY. The 1CY was seen by Martin Elliot, but I can see from his photo that I saw it in both September and October.

The 2CY in the video below showed very well this afternoon. The video doesn't do it full justice as the lovely silver grey of the mantle and the median coverts has lost something. Nevertheless it shows how distinctive the body shape is compared to the nearby Herring Gull.

Wishing Everyone a Merry Christmas and a Happy New Year - thanks for visiting my blog during 2016. 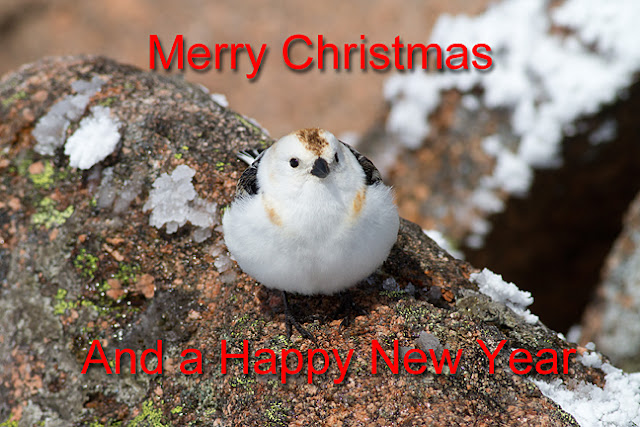 Caspian Gulls and Other Stuff

Today was another dull day at Shawell, but the sun was shinning when I called in for my lunch break mid-week. Whilst I was eating my sandwiches the gulls were enjoying a splash about. One of the nearest gulls was an adult Caspian Gull, so I took lots of photos of it. The light was a bit harsh, but some of my digiscoped efforts turned out OK.

Today I saw five different Caspian Gull at the Shawell. One was a bird I have seen three winters in a row now, but the others were not so distinctive. Many of the Caspian Gulls return to Shawell year after year. It is not always easy to know whether I have seen them before without a colour-ring to help, however. I managed to photograph three of today's Caspian Gulls. The light was really awful, so photography was quite a challenge.


A Herring Gull that was ringed in Finland reappeared today. I have now recorded it three winters in a row at Shawell. It is a yellow legged individual with lovely long wings.


I also saw a Lesser Black-backed Gull that I first saw back in 2013. This one was ringed as a breeding adult on the Isle of May, Scotland in 1991, so it is over 30 years old. It colour-rings are wearing out, the green one with the white letter M has migrated up its leg and the orange and red uncoded rings have broken up and become one ring.

A Damp December Day at Shawell

Did it get light today? Very difficult conditions.

The gulls are a bit unpredictable at present - maybe the mild weather. The lagoons were the best spot until a buzzard came a hunting.

A first-winter Mediterranean Gull was a nice surprise. These are much rarer at Shawell than Caspian Gulls - I have only found 18 since 2012.


I'd love to be able to see all the gulls gathered together in one area at the moment, as I'm sure there must be more Caspian Gulls around. I had to settle for just one adult today. Compare its clean looks to the scruffy appearance of the Herring Gull. The small head and beady dark eye also help to separate it from the Herring Gull.

As you might know, a first-winter Dusky Thrush was discovered in Derbyshire earlier this week. Large crowds gathered and the TV cameras arrived. I had been very busy one way or another mid-week, so I put it to the back of my mind. However, I eventually succumbed to the pressure and decided to try a quick dash to Beeley this morning.

Beeley is a small village, so I'm sure the residents are quite amazed by the invasion of birders. They seemed to be enjoying the event and were making the most of it. Tea and buns were on offer and I'm sure the village pub has done well out of it.

Anyway the bird was showing on arrival but distantly. Eventually it headed to a small field and fed on apples. Photography was very difficult due to needing to get close to the bird, but there was a 2 metre tall wall in the way. I did manage a few record shots by standing on my tip toes, but they are nothing to shout about.

Mission accomplished and back to work before I was missed - result!

I checked Facebook's Western Palearctic Gull Group this morning to see if I had any comments on a selection of photos I had posted. Staring back at me was a gull that I was very familiar with and it was captioned as an American Herring Gull (Larus smithsonianus). I knew when I saw it back in November that it was something interesting, but I could not put a name to it.

Well yesterday Peter Adriaens and two others were at the Portimao Fish Harbour and they independently found the same gull. They identified it as an American herring Gull.

The key to the identification is only seen when the gull is observed in flight from above or during a wing flap whilst preening. The secondaries show black markings rather than vermiculations, which are shown by Old World Herring Gulls. This is perhaps something I should have known, but it just hadn't stuck in my head, probably because I hadn't seen one before. Its quite tough to learn about something you are unable to experience. The greenish tinge to the bill is said to be good for AHG and the black markings on the tertials are also a helpful feature. I have quickly learnt about these features, but things are always easier when someone points you in the right direction.

It was quite docile when I saw it and was hanging about on 'Death Row'. This is an area at the harbour where sick or injured gulls tend to congregate. As such it walked away rather than flew, so I didn't capture any flight images.


I had no idea the complexities of gull identification when I began this journey, but I am having great fun learning.

Update: since this post our bird has become the most discussed gull on facebook. Some now think it is probably a sick Yellow-legged Gull. Incidentally this was the view I took after finding it in November 2016. It returned to Portimao as a fourth-winter and its primary pattern, according to American gull enthusiasts, does not match any AHGs. However, both myself and other observers in Portugal have not seen a lusitanius Yellow-legged Gull that matches this one. The head streaking for one thing does not match any third-winters birds I've seen in Portugal. We wait its capture and DNA test if anyone is up for the challenge.

Second update: it has apparently been tested and its DNA fits YLG. The oddest looking YLG, but there you go.

A Paler Shade of Grey

Since arriving back from Portugal I have had a few successful trips to Shawell, but it has been quite hard work. Why? Well here's the list: men with guns, men with dogs, buzzards, cormorants, herons,  peregrines and foxes. I would quite happily shove the 12 bore rifles somewhere where the sun doesn't shine.

The highlights from my Wednesday lunchtime visit and today were three Caspian Gulls and a colour-ringed Lithuanian large gull. It seems to be mostly Herring Gull, but I wouldn't rule out a bit of Caspian Gull blood.

Today's Caspian Gull was a first-winter, quite an advanced one. Not only has it replaced its scapulars, but also many of its coverts including some outer greater coverts. The other first-winter this week was not so advanced. The advanced bird was also there last Saturday.

The Lithuanian gull is the first colour-ringed large gull from that country that I have seen at Shawell. I have had a colour-ringed Black-headed Gull from there though. It was ringed as a chick during May 2015 at Kretuono ež. Didžioji sala, Švenčionių r., Lithuania. 55°14'45"N 26°04'45"E. 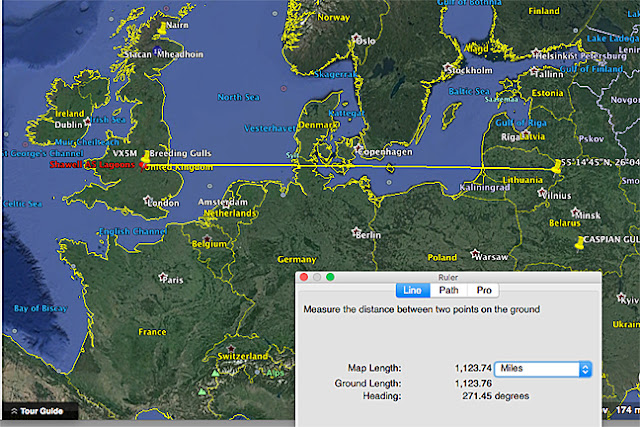 Posted by Carl Baggott at 22:05 No comments: