I happened to be at Shawell again at lunchtime today and just had enough time to have a quick look at the gulls on the A5 Lagoons. The first gull I looked at was a first-winter Herring Gull with an orange colour ring. It was ringed by the North Thames Gull Group -  quite recently I presume.

Shortly after that I came across an adult Caspian Gull. It had a large bulge in its shoulder area and judging by the way it constantly flexed its neck it must have been quite uncomfortable. This is the nineteenth Caspian Gull that I have seen at Shawell this month, which is easily a record. With a bit of luck tomorrow I should see the twentieth. Over the past few years my annual total has been about 40 at the site, but by the looks of it 2016 is going to be a bumper year. This is perhaps to be expected due to the population increase being recorded in both Germany and Poland.

I guess it won't be much longer until the status of Caspian Gull is the same as Yellow-legged Gull in the UK.

There wasn't much action initially at Shawell this lunchtime, but a group of around 100 gulls eventually arrived and amongst them were two maybe three Caspian Gulls.

The first was a small adult female, which could easily have been overlooked. Her Caspian Gull features were quite subtle. Luckily she was having a good wash, which is always followed by a wing flap. I managed to capture the underwing primary pattern that, although a bit blurred, shows the typical primary pattern. The long white tip to the longest primary (P10) is visible.


Shortly after the adult, I spotted a first-winter. The photo doesn't really do her justice. I would be great to be able to get closer to the gulls. 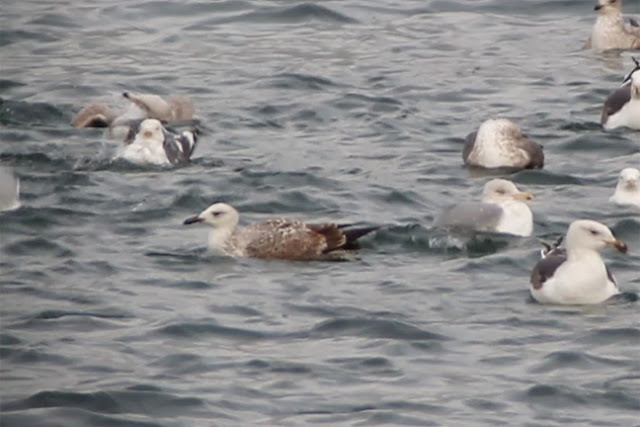 As the gulls began to climb out onto the bank I spotted a gull, which had some Caspian Gull like features. Its bill was long and parallel edged, its legs were long and its primary pattern looked OK for Caspian Gull, but structurally I wasn't convinced. It head was a bit bulky and its eyes looked quite large although quite dark. It is probably a hybrid Caspian x Herring Gull, but its difficult to be certain, as it could be just an odd Herring Gull. 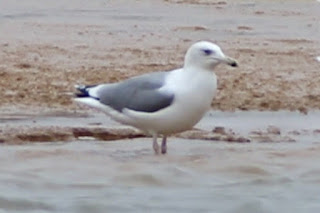 There are still thousands of gulls in the area, so hopefully some more 'white-wingers' soon.

After all the ice and Glaucous Gulls on Thursday it was back to normal at Shawell today. That said three Caspian Gulls were good to see - an adult, and two second-winters. The adult I saw on Thursday but the second-winters were both new birds.

Below is a video of the second-winter which is worth a watch as it is such a smart looking gull. Remember best watched on Youtube with the quality setting on HD.


As always I was entertained looking for colour rings and amongst yesterday's crop was a first-winter Great Black-backed Gull from Norway. It great that these colour rings help us understand where these birds come from.

Posted by Carl Baggott at 20:52 No comments:

A few more pics from yesterday all digiscoped:

The gull above was not 100% convincing at times on the ice, but when it slipped into a patch of open water it transformed into a beautiful elegant Caspian Gull.

I decided to take advantage of the cold snap and go and enjoy a few gulls on the ice at Shawell today.

First though I nipped over to Braunstone to try and get some more pictures of the juvenile Glaucous Gull, as it is still frequenting the Casepak recycle plant. Alas I didn't get any views of it, but I did spot a nice Mediterranean Gull resting on top of the large green cladded fence.

The lure of the ice at Shawell soon saw me hurrying away from Leicester. At the A5 lagoons it was standing room only on the ice. A smart adult Caspian Gull was on the bank, but partially hidden by overhanging trees. With lots of legs on the ice it was inevitable that some would have colour rings. In the end I read 17 including the Herring Gull from Finland that I saw before Christmas.

I was hoping for a 'white-winger', but I got two. My total for January is now five different Glaucous Gulls in Leicestershire. I seem to be on a one man mission to de-value the species in the County!

Now sit back and enjoy a video of the two Glaucous Gulls that were at Shawell today - much warmer sat in front of your PC. Don't forget to change the quality to HD.

It's Funny How Things Turn Out

My plan last night was to go into Leicester today to sort out a battery problem with my laptop. This morning when I checked my laptop the battery warning had disappeared and it was working, so I decided to save my money for a bit longer.

I now had time on my hands, so I decided to go over to Brascote Pits. By the time I reached the end of my road I had changed my mind and decided to go and have a look and see if there were any gulls at the old British Shoe factory.

It had snowed over night so it was quite cold. I hadn't been on site more than five minutes when a flock of gulls appeared in the air above the green wall that hides the food waste recycle plant. I was most surprised to see a white-winger amongst them. A quick check through my bins confirmed that it was a juvenile Glaucous Gull - get in there!


If one wasn't enough, another 'white-winger' flew over my head from the roof that the gulls nest on and disappeared over the wall into the recycle plant. Luckily I got some photos and, although I originally thought it was an adult Glaucous Gull, it turned out to be a sub-adult, as it bill is still immature looking. I got several more chances to view and savour its pearly white wing tips. Two in one day - not bad! 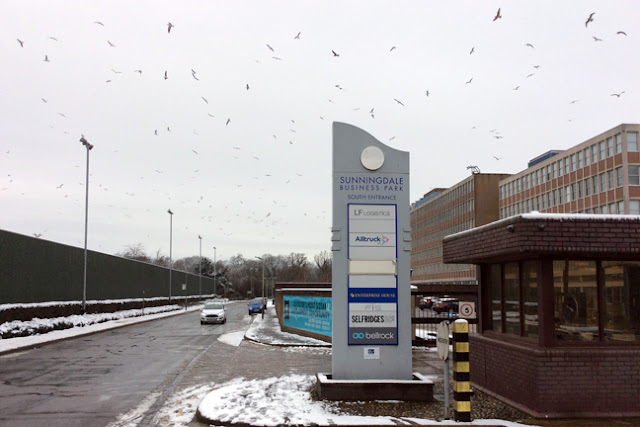 The place I am allowed to view the landfill site is useless in the morning if the sun is out. This morning I arrived just before the sun was above the horizon. Many gulls were already feeding and amongst them a juvenile Glaucous Gull appeared. There wasn't much time, as the sun was starting to make viewing difficult despite still being hidden. It was a smaller individual than last week's and its mantle was noticeably pale. I was able to take a short bit of video to at least record it. John Judge confirmed that out of the two juveniles roosting at Draycote Water one was smaller and paler on the upperparts. 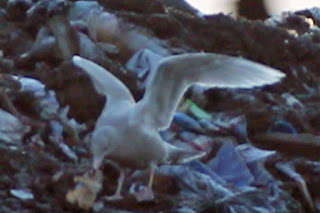 For best viewing of the video change the setting to HD.

Caspian Gulls were in short supply this weekend: only one adult was present in a field near Shawell Village and a first-winter was in the same field, but that one was most likely to be a hybrid. Its greater coverts were a bit too chequered for my liking and its scapulars were a bit heavily marked too.

Last week I made one visit to Shawell and managed to see three Caspian Gulls, two adults and a third-winter.

All those listed below are considered to be different individuals, however, some duplication is inevitable:

All thought to be CG X HG unless otherwise stated. Only really obvious hybrids listed here.

Posted by Carl Baggott at 21:35 No comments:

I was fired up this morning and determined to have a good day. The forecast didn't look good, but he who dares and all that.

I started the day scanning through the gulls resting in the massive quarry. I didn't count the Herring Gulls, but there may well have been up to 3000 present. A lone third-winter Caspian Gull was amongst the first group, but surely there must be more? Sure enough by the end of the day my total had reached seven, which may well be a record for Shawell. The adult I saw on Thursday was still present, but pride of place goes to the four first-winters that helped brighten up a dull day. First-winters in January and February can be really smart looking.


I pride myself on almost always getting a record shot of my best bird finds, but the record shot I got today stretches the title record shot to the limit. A juvenile Glaucous Gull was resting by one of the distant pools at Cotesbach Landfill site. No problem viewing it through my 70 power scope (some sort of fancy American/Swarovski speak ;-), but photographing it was a different prospect. Who can argue with the result?

As well as a record breaking seven Caspian Gulls I also saw another German ringed gull, however, I could only read three of the four letters that made up the code. It was either a hybrid at the Herring Gull end of the scale or a Herring Gull. Hopefully the scheme coordinators can pin point which bird it is.
Posted by Carl Baggott at 19:49 No comments:

I was out near Shawell at lunchtime, so I grabbed half an hour at the lagoons. There is a huge gathering of gulls there at present benefitting from Christmas waste being delivered to the landfill. No 'white-winger' yet (they will come), but there were three smart Caspian Gulls, including a belter of an adult, on the lagoons.

Posted by Carl Baggott at 21:05 No comments:

Amongst the gulls at Shawell today I spotted a third-winter with the look of a Caspian Gull about it. However, it wasn't a classic and its short wings and slightly odd shaped bill left me underwhelmed.

It was having a wash and brush up and every now and then it would flap its wings hard enough to get it airborne for a few seconds. As its legs left the water I noticed it had a German green colour-ring. Eventually it flew to the shore and gave me a few seconds to read its colour-ring before it flew to the bank between the two lagoons.

Its colour ring read XZDX. I emailed Ronald Klien in Germany and he replied quickly (technology is quite amazing as I did that whilst watching the gulls). XZDX was considered to be most likely to be a hybrid and my observations agree with that. It looks like it has a bit of Herring Gull blood in it.

XZDX is quite a traveller as you can see from its life-history that is displayed below: