I was over at Shawell this morning and three juvenile Glaucous Gulls were in residence.

The regular juvenile was there and also the bird that was at Stanford Reservoir on Saturday plus a new one.

There's a lot of excitement at Shawell at the moment with all the lovely 'white-winged gulls' offering up some easy year ticks.

It's good to see people enjoying gulls and hopefully at least a few of the visitors will have taken away an interest in learning more about them. Gull identification takes dedication -  just an interest in getting a year tick won't help.

Before I talk about the gulls I must remind all visitors that parking is limited. There is only room for about four cars if everyone parks sensibly. A couple more cars may possibly be parked at Redlands near the entrance point. Park on the left in the entrance just before the gates. DO NOT block the gates. Use common sense and if you're told to move do so. Please remember this is a working quarry and landfill site; the road has a great deal of heavy traffic. Do NOT try to enter the landfill site or the quarry for any reason. Thank-you.

Back to the gulls - at present there is approximately 20,000 gulls at peak times around Shawell, but not always in locations that can be viewed. When they all come into view it is breath taking. A falconer is employed to scare the gulls and when one of his falcons is in the air it is wonderful to hear the sound made by all those wings as they wheel one way and then the other to evade the falcons talons. 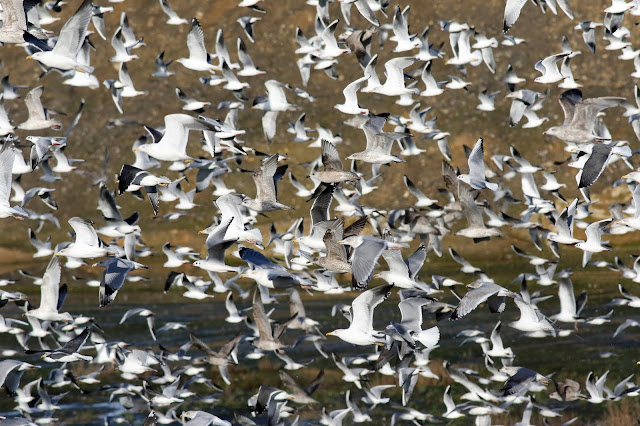 It isn't just the 'white-wingers' that interest me, but there are fascinating birds even amongst the most common species. With practice you can separate many of Herring Gulls into the argentatus and argenteus subspecies. It is great to see very fresh juvenile Herring gulls from far to the north and the adults too.


Caspian Gulls are popular, but most birders really struggle with these. An apprenticeship with the commoner species is really useful, as it enables the observer to spot subtly different species like Caspian Gull. At Shawell adult Caspian Gulls are the least common with first-winters being the most regular. With so many gulls coming to the sandpit off Gibbet Lane it can be difficult to see the Casps from the Herrings, but with practice it becomes easier.

Today the weather was very poor and there was no tipping, however, a couple of Glaucous Gulls were around including a new juvenile and I showed four Caspian Gulls to some of the visiting birders.

Posted by Carl Baggott at 08:00 No comments:

Saturday July 22nd 2017 I found a second calendar-year gull at Cotesbach tip that had replaced all of its primary feathers. This is something not recorded in either graellsii or intermedius Lesser Black-backed Gulls, but is common in Baltic Gull Larus fuscus fuscus. The mantle and scapulars are too pale for a Baltic Gull. Heuglin's Gull is worth considering as they have been recorded with a full set of second generation primaries during summer of their second calendar-year. However, it is less common to see Heuglin's Gulls with new primaries than Baltic Gulls at this time in their second calendar-year. Or, possibly it is a very interesting gull just outside of our current knowledge range and so should remain un-identified? One regular contributor on Facebook's WP Gull Group said if he had to chose he would go for Heughlin's Gull. I was concerned about the complete set of fresh primaries, but check this out from the core range of Heughlin's in Russia

Heughlin's Gull doesn't yet have a full criteria to help identify extralimital examples.

Since 2014 and during the spring and summer months I have been searching through the first-summer  Lesser Black-backed Gulls looking for fresh black primary feathers. I struck lucky in July 2015 when I spotted a first-summer Baltic Gull at the landfill site, which has been now been accepted by the BBRC. 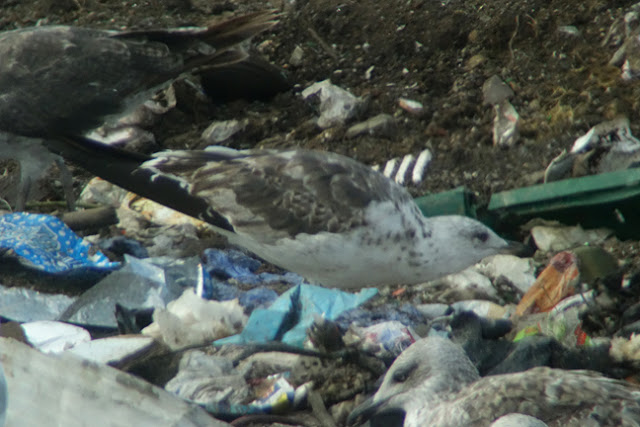 It felt a bit more wintery at Shawell today.

Due to the recent spate of 'white-wingers', it was positively boiling over with birders today.

Brian Moore had picked up a new juvenile Glaucous Gull on Thursday and Chris Hubbard spotted it flying in to the sandpit area today. Also the long staying second-winter was back again as was the second-winter Iceland Gull briefly.

Amongst the half a dozen Caspian Gulls I spotted a nice looking German ringed first-winter - XCCA. 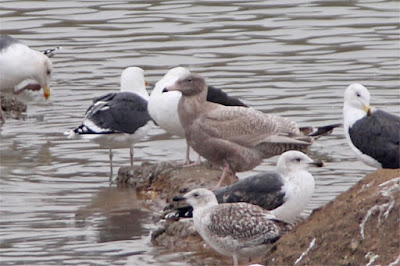 Posted by Carl Baggott at 19:54 No comments:

Happy New Year to you all!

The original plan today was to have a gentle walk with the ladies of the house, but both were feeling under the weather this morning. I was told to go and enjoy myself, so off I went to Shawell for a few hours.

The tip was shut today, so although there was a lot of gulls there they soon disappeared when some lovely person started shooting.

Anyway I managed to locate the adult and the second-winter Glaucous Gulls and also a welcome Green Sandpiper. After leaving Shawell I had an hour at Brascote Pits where the highlights were a drake Shelduck and a Woodcock.

Enjoy this video of the two Glaucous Gulls: