Below is a short video of a juvenile Mediterranean Gull that I found at Shawell A5 Lagoons, Leicestershire on August 31st:


Black-headed Gull numbers had increased since my last visit and amongst them was a smart juvenile Mediterranean Gull. It is just over twelve months since I last found a Med Gull at the site and that was also a juvenile.

READ MORE
Posted by Carl Baggott at 22:04 No comments:

Hasn't the weather been good this summer? After moaning about the constant rain, wind and hail storms last year it has been really good to keep waking up to another bright day. There have been plenty of butterflies around, which bodes well for future years. The buddleia in my garden is alive with Peacocks and Tortoiseshells plus at least one Painted Lady. In all I've seen eight species in the garden over the last week.

A pair of Ravens reappeared where I work yesterday and announced themselves very noisily. They were present all day and will probably be around all winter now.

I am starting to make a habit of visiting Shawell A5 lagoons after work on  Wednesday evenings and last night was no exception. The Black-tailed Godwit that was first seen on August 22nd was still present. Three Black-tailed Godwits at this small site, so far this autumn, is pretty impressive as far as I'm concerned. I'm still waiting for either a Little Stint or Curlew Sandpiper, but there's still time.

The gulls were around, but someone was shooting close by, which was making them nervous. I did manage to find two more juvenile Yellow-legged Gulls amongst them.

One was a very young bird bird and the other was almost in first-winter plumage.


READ MORE
Posted by Carl Baggott at 12:01 No comments:

The gulls were gathered at Cotesbach landfill site in their thousands again today. The weather wasn't quite as bad as the forecast suggested, so the visibility was reasonable. The working face of the tip was a bit too high for me to see the feeding gulls well, but a YLG moulting into 1st-winter plumage showed well on the near edge of the mound.

I moved to view the gulls resting and bathing in the quarry. Amongst the gulls was a splendid juvenile Herring Gull, which was attired with a big yellow ring with the code F+C. This gull was ringed in Gloucester.

A 3rd year Caspian Gull flew on to the pool in the quarry, but only took a drink and then flew off. Luckily I relocated it in the afternoon at Shawell A5 Lagoons. It showed very well for much of the afternoon. It was moulting its primary feathers although some old ones were still present but quite faded. A new primary is visible in the photographs though it is not fully grown. The bird shows the typical profile, which seems to be most obvious at this age, a smallish head and a long body with a low profile. The small dark eyes are set forward and the bill is typically washed out and slender. Also note the 'pencil markings' on the side of the neck.

The head is perhaps not the smallest I've seen, but it is within the range, as far as  I can determine by studying many photographs. The head size varies just like in other similar gull species. This birds head still looks small in relation to the long body.

My previous posting about a juvenile Yellow-legged Gull at Cotesbach landfill site seems to have been popular. As such I thought I'd waffle on a bit more about large white headed gulls in their juvenile plumage. I failed to find any juv. YLG's on Wednesday night, but I did spend plenty of time looking closely at the juveniles of the commoner species that were there. 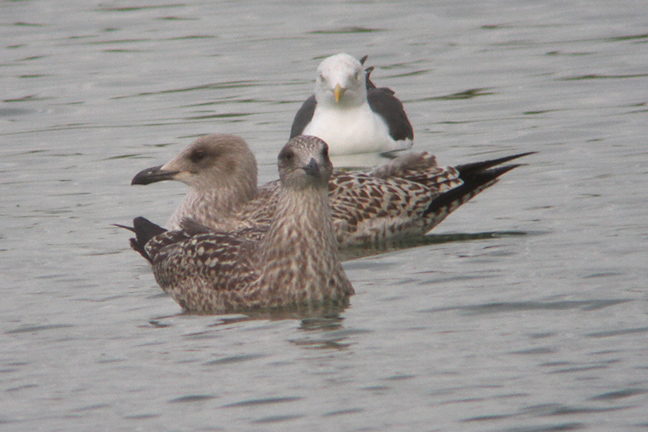 The middle bird in the photo above is a juv Herring Gull and the one in front of it is a juv. Lesser Black-backed Gull. Before identifying a juv. YLG or Caspian Gull a good working knowledge of the other two species is essential. Of course it is not always easy and there will be many opportunities to get it wrong. This particular Herring Gull, from my experience, has notches on the tertials that are larger than most. The tertials are the horizontal feathers to the left of the long black wing tip feathers (sorry if you know this already). The notches are the cream coloured triangular shaped markings on the brown feathers. Not all tertial notches on juv. Herring Gulls are as obvious, but notches of some sort can almost always be seen unless the feathers are really badly worn. The tertials of juv. LBB Gulls are dark brown with pale buff fringes. Beware, however, that some LBBGs have notched tertials. To me, juv. Herring Gulls always appear to be slightly frosty in comparison to the more dusky juv. LBB Gulls and the large head size of HG is usually distinctive. HG bills are usually obviously more bulky than LBBG's, but not always as there are a few large juv. LBBG's to contend with. 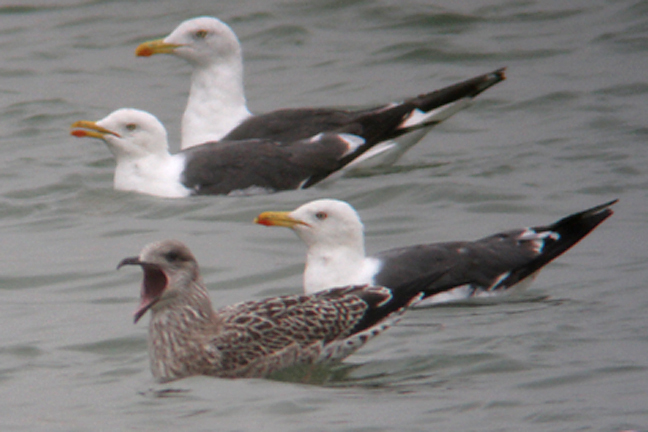 On Wednesday night I estimated that there were at least 3000 Lesser Black-backed Gulls loafing around at the landfill site. There were still about 20 YLG's, 30 Herring Gulls and a lone GBBG. 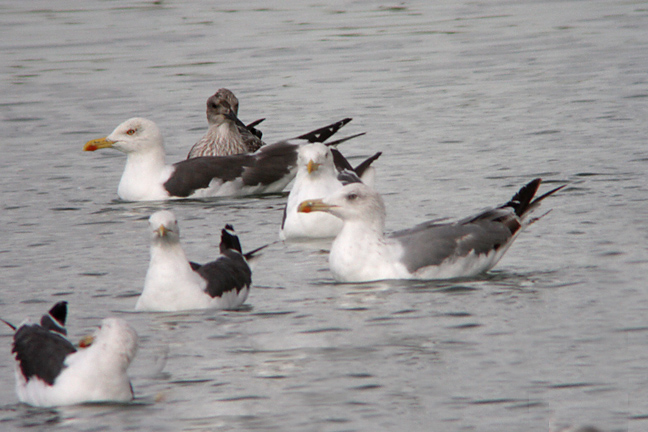 Amongst the gulls on the A5 Lagoons were at least nine YLG's and the one above was a real monster. He took great pleasure in bossing the other gulls about. 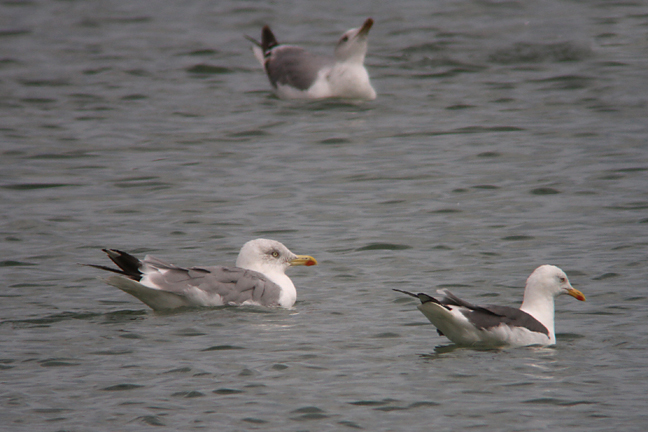 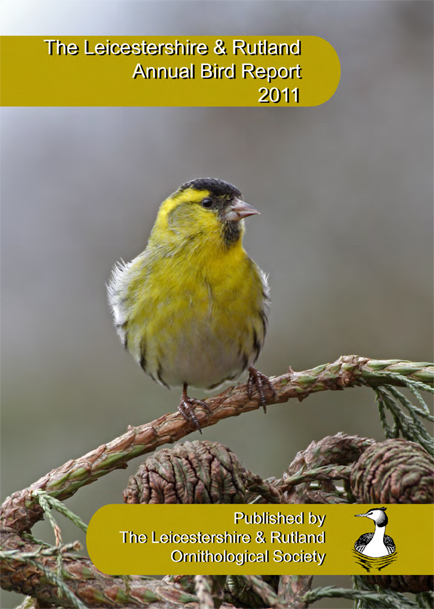 I picked up my copy of the 2011 Annual Report on Saturday at the Rutland Water Birdfair. I didn't, however, spend a great deal of time reading it, as one of the joys of being Editor is not wanting to read it again after all the proof-reading etc.

After six years, as Editor I've handed over the helm to Mark Skevington who has kindly taken on the role. I wish him luck and I now look forward to sitting in my armchair reading the next report for enjoyment.

During my time as editor I've had a great deal of help from the editorial committee, and so I would like to thank them all once again for their efforts. I must also thank John Wright for helping with illustrations each year. They really lifted the publication in my opinion.

I visited Cotesbach landfill site late yesterday afternoon and many gulls were loafing about in the quarry. Searching through them, I had found nothing of particular interest until I got to the very last gull.

READ MORE
Posted by Carl Baggott at 20:49 No comments:

I've made quite a few visits to Shawell A5 Lagoons and the nearby landfill site already this month, which has resulted in twenty four colour ring readings. These were all sported by Lesser Black-backed Gulls. Most were ringed in the United Kingdom including two from Guernsey, but others were ringed in Germany, Holland, Iceland and Norway. One of the more interesting life histories was that of VV4T. This one was originally ringed at Rainham Tip, Greater London during late 2011, but shortly after it was holidaying in Western Sahara. I'm still awaiting the report on the Icelandic bird, but hopefully that will be an interesting one. I did see a couple of colour-ringed Herring Gulls, but the rings were un-readable due to having mud covering some of the ring.

Amongst the LBB Gulls this weekend were some really dark individuals. These are of the sub-species Larus fuscus intermedius, which are birds that nest to the east of Britain mainly in Norway. The sub-species Larus fuscus fuscus (Baltic Gull), which nests in eastern Scandinavia is the darkest backed of the group with the whole wing looking black. The sub-species that nests in Britain is larus fuscus graellsii and this one has dark grey upper parts that contrast clearly with the blacker primary (wingtip) feathers. The blackest of the gulls I saw yesterday also had very long wings which is a feature of the sub-species Baltic Gull. However, the organiser of the Norwegian gull ringing scheme stated to me that fuscus type LBB Gulls are nesting near Tromso. From this I take it that some Larus fuscus intermedius look like Larus fuscus fuscus. I have seen coloured-ringed LBB Gulls from Tromso at Shawell a few times, but they weren't as dark as the bird in the photo below. Hopefully a colour-ringed Baltic Gull will be seen at Shawell sometime, as this is probably the only way of being certain of its origins.

The bird in the photograph below is much darker than others I've seen that were ringed in Norway as intermedius, also its quite long winged.

READ MORE
Posted by Carl Baggott at 20:13 No comments:

Whilst searching for some extra photos for a talk I'm preparing I found the image below. It was amongst loads of pictures I'd taken of this female Dotterel a few years ago. I had missed it previously, but now I've found it I'd like to share it with you.

I was amazed to come across a couple of Black-tailed Godwits whilst searching through the gulls at the Shawell A5 Lagoons this afternoon. This is only the second time this species has been recorded in the SW Leics list area and a tick for me. They were present for about an hour and a half, before they flew off heading south.

It was difficult to photograph them as they were distant and the light was a bit too harsh. The photo below was my best attempt.


READ MORE
Posted by Carl Baggott at 19:56 No comments:

After finding a Turnstone at Shawell A5 Lagoons on July 22nd, it was a real surprise to see another one there last night. Both were males, but it would seem unlikely that just one bird is involved. I've been to the site quite a few times during the 11 days that separate the sightings without seeing a Turnstone. The site is small, so it couldn't really go missing. Unless news that it has been hiding at the nearby Stanford Res comes to light, I will treat it that two birds were involved.

The scrape that has developed this year will hopefully attract more waders. Hopefully a Pectoral Sandpiper, as that would be a great one to be the 200th species for the SW Leics list.