Four Caspian Gulls at Shawell this week: two adults and a couple of first-winters. One of the first-winters was a German colour-ringed bird. It was ringed at Grabendorfer See - a large lake near Liepzig. I visited this site in April when I took part in the International Gull Meeting. Not a classic, but probably OK. The greater coverts are a little more patterned than I like, but examples like this are within the accepted variation. It has replaced at least one median covert and all its scapulars, which bodes well. Hopefully it will return each year, so we can see how it matures.

I was excited when I spotted a white gull sleeping amongst the Herring Gulls, but as soon as it lifted its head I realised something was not quite right. It had a Herring Gull like bill and structurally it wasn't quite right.  last year's 'white-winger' season started with a Herring Gull with pure white primaries as well.

As I mentioned in my previous post, one of my targets for our trip to The Algarve was flight shots of first-calendar year gulls. This subject is covered quiet poorly in identification guides. Typically Lesser Black-backed Gulls appear slighter than most Yellow-legged Gulls, however, there is much overlap. The tail band of first year birds is usually diagnostic, but again there is variability. The tail band on most Yellow-legged Gulls tapers thinner on the outside edges. Lesser Black-backs generally have a broader tail band with less white on the upper tail and more black markings above the tail band. LBBGs don't usually show an obvious pale window on the inner primaries, but in bright sunshine both species showed some pale areas on the inner primaries. However, a pale window on the inner primaries is obvious on many YLGs although not a distinctive as on first-calendar year Herring Gulls. 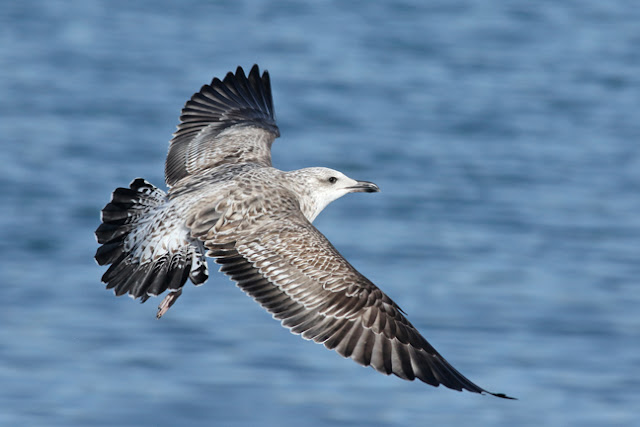 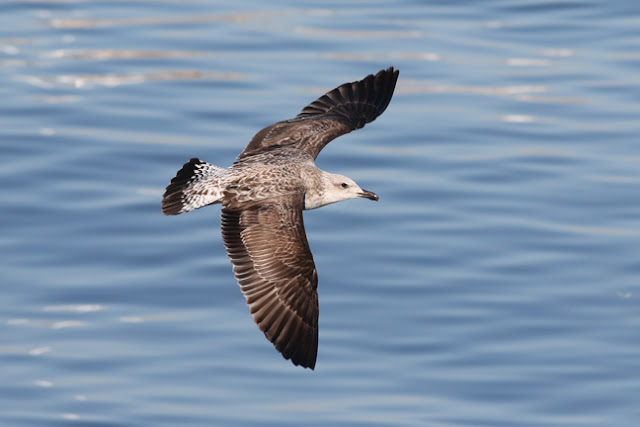 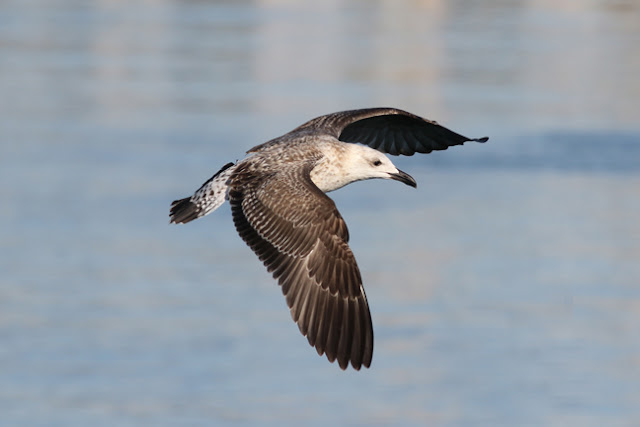 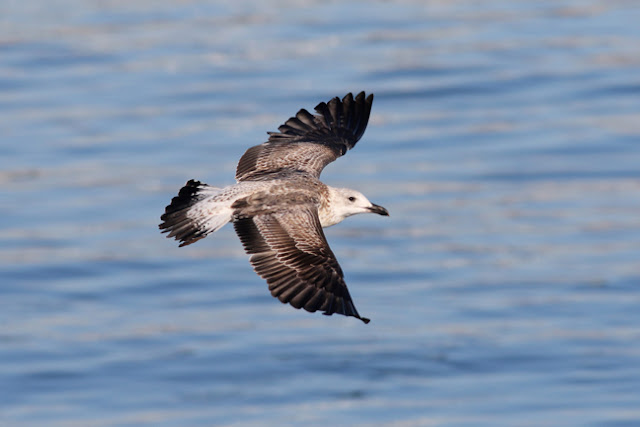 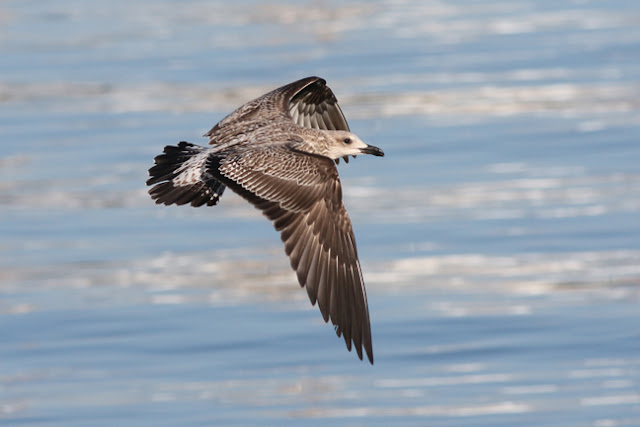 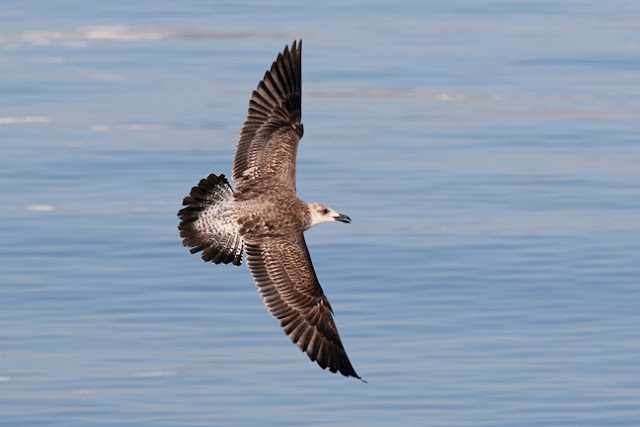 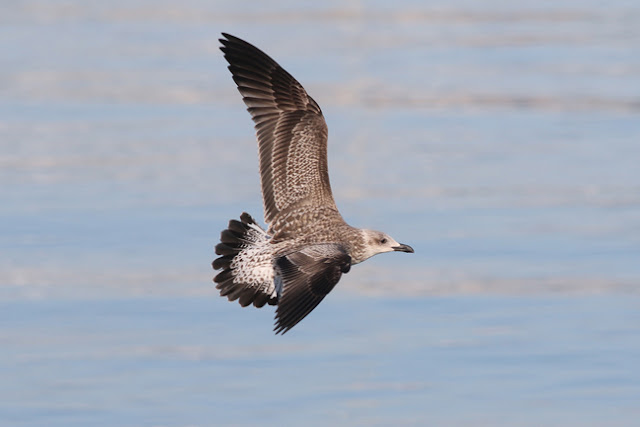 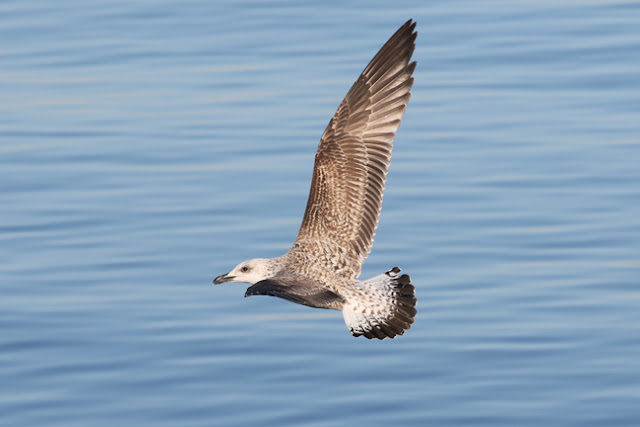 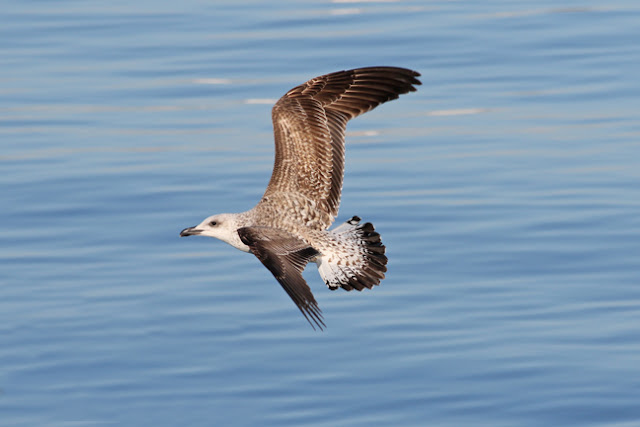 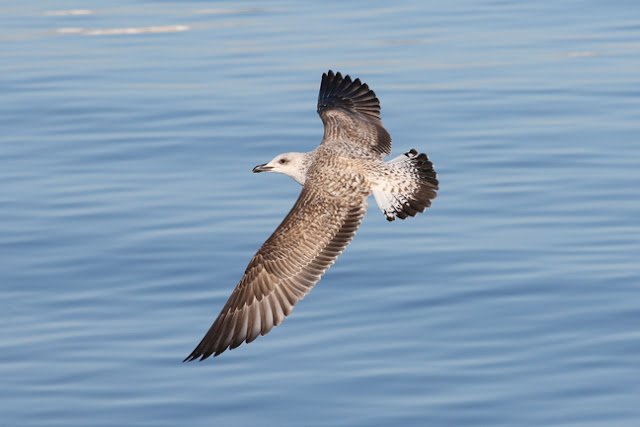 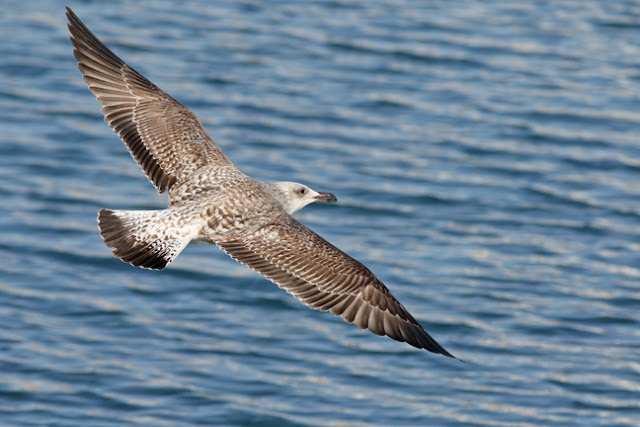 This last one shows a wide tail band, but note it has already replaced one of its central tail feathers. It bulky size large head and short stubby black bill all point towards Yellow-legged Gull. 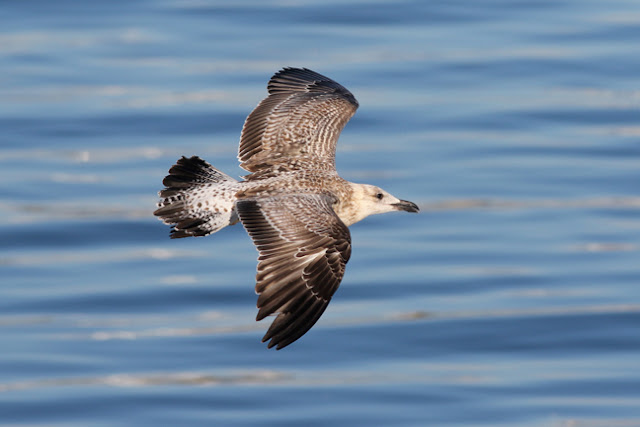 Posted by Carl Baggott at 21:06 No comments:

A Bit of Winter Sunshine

I was back down in Portugal last week enjoying some warm winter sunshine. It was around 21 degrees C everyday and the air was really clear.

One of the highlights is always first light on the steppe or pseudo-steppe near Castro Verde. I have a site that always produces some great early morning entertainment. In the half light I could already hear Calandra Larks singing and this year a new sound caught my attention. I soon learned that the sound was coming from a group of Black-bellied Sandgrouse and they seemed to be displaying. At least 20 BB Sandgrouse were flying around and doing their strange call. A single Great Bustard flew past and an Iberian Grey Shrike perched close by. A Merlin dashed across the steppe disturbing hundreds of Calandra Larks - phew it was time for some breakfast!

We enjoyed lots of great birds during the week with the wintering Bluethroats winning the bird of the trip prize. Near Faro we visited a great area where Dawn spotted a male Bluethroat perched in the open, but I was looking the wrong way and only saw its backside, as it disappeared into the reeds. On the next visit I spotted another male skulking in a ditch, but this one had colour-rings. I'm still trying to track down where it was ringed. Possibly Spain, but I haven't received a reply yet.


The area is called Parque Natural Ria Da Formosa. It is quite close to the area known as Ludo Farms. Dawn always enjoys watching the aeroplanes coming in to land at the nearby Faro airport. Ospreys and Caspian tern were fishing in the lagoons and hundreds of ducks including Pintails were dabbling. Winter plumaged Little Stints were educational and a Short-eared Owl disturbed near the track was a new Portuguese bird for me. On a reedy lake by the golf course were many more ducks and at least a dozen Western Swamphens were looking comical as normal. Little Bitterns were elusive this time, but just before we stood up to leave the hide a splendid male broke cover and posed for a few second on a reed stem.


As normal I made Dawn endure a few hours at the Portimao Fish Harbour (not everyday as she claimed when we got home). I targeted flights shots of first year Lesser Black-backed and Yellow-legged Gulls. I will put together a set of those for my next post. As well as the gulls I enjoy looking at the working boats and the old wrecks. 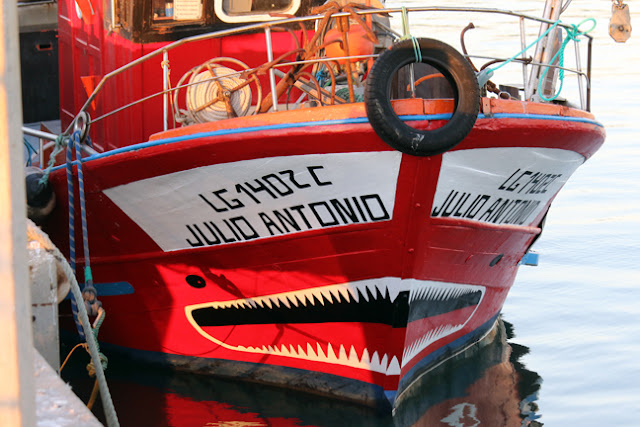 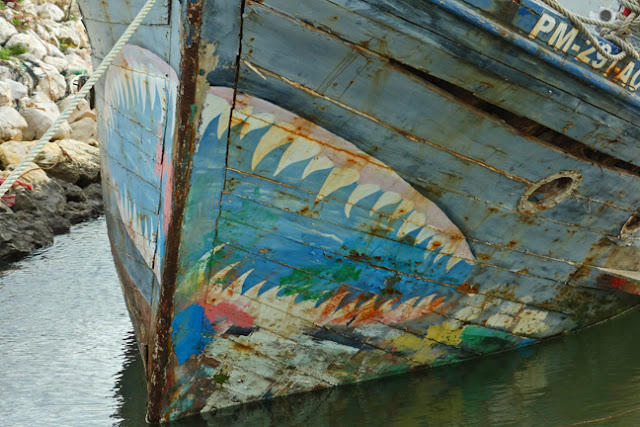 Posted by Carl Baggott at 20:20 No comments:

I was out working near Shawell this afternoon and noticed the gulls were again using the flattened area on the Gibbett Lane side of Shawell Sand Quarry. It would have been rude not to have had a look at them, so I allowed myself 15 minutes. Herring Gull numbers are building up nicely now and this usually heralds the arrival of more Caspian Gulls. I quickly found a couple of adult Caspian Gulls, which were new ones, but I really struggled to get any photos that weren't completely blurred due to the very poor light.

One of the dumper truck drivers disturbed the gulls, but luckily a new first-winter Caspian Gull was amongst the group that had pitched back down in front of me. It was quite a striking individual and I fared slightly better with the camera with this one.

It felt like winter yesterday at Shawell. There is no shelter from the wind if its coming from the north, so I just had to put up with it. I'd had enough by half two in the afternoon, but I'd had some good stuff by then.

The second-winter Caspian Gull that I saw mid-week was still hanging about.


The cold wind started to chill my bones and my enthusiasm, especially when the gulls were disturbed by a passing buzzard. Many of the gulls headed north towards the landfill site, but some came back down onto the lagoon. Surprisingly a first-winter Caspian Gull that I hadn't already seen appeared amongst them. It was a very distinctive individual and a new one.


Watch the video below to see just how smart this one is - remember, best watched by changing the video quality to HD.

I called in at Shawell A5 Lagoons briefly today for my usual Wednesday lunchtime gull fix. On arrival the gull numbers were quite low, but they soon started to arrive on mass. I couldn't believe that amongst several thousand large gulls there were no Caspian Gulls. I was about to leave when I spotted a second-winter Casp. Just then Steve Nichols arrived and I told him what I'd got and gave him directions. As I gave a running commentary to Steve about what my bird was doing it became obvious we were not looking at the same gull. I panned slightly to the left and there was a first-winter Caspian Gull. This one may well be the same one that I first saw on October 12th due to both of them appearing to show quite a lot of white on the median coverts. The Second-winter has some really nice P10 mirrors developing - a feature which should separate Caspian gulls at this age from Herring and Yellow-legged Gulls.

For a bit of fun back in January 2015 Steve Lister presented me with a UK 400 type certificate for successfully reading colour rings on 500 gulls at Shawell. He also challenged me to push on and record 1000. Well at the weekend I smashed through that target reaching 1005 by mid-afternoon on Saturday. Just like when I reached 500 it was another Herring Gull. This one had been ringed at Hornøya, Finnmark this year (full details not yet available). It had a data logger fitted to its colour-ring.

The 1000 gulls were 805 Lesser Black-backed, 110 Herring, 40 Black-headed, 31 Great Black-backed, 8 Caspian (2 hybrids), 3 Common, 1 Baltic (maybe 2), 1 Mediterranean and 1 Herring x Yellow-legged. The gulls came from Belgium, British Isles, Croatia, Denmark, Finland, Germany, Hungary, Iceland, Latvia, Lithuania, Netherlands, Norway, Poland, Portugal, Russia, Spain and Sweden. It took five years and at least one visit per week to reach this total. In total I made 2080 separate readings during this time, so I have collected quite a bit of data on some of the gulls. At some point I must write up my findings, but for a while longer I will enjoy gathering more information. A Yellow-legged Gull with a colour-ring still alludes me at Shawell, so I must keep going.

I read the first colour-ring with Steve Lister back in January 2012. My strike rate has increased dramatically since those days helped by my Swarovski 70 x scope and the experience I now have in looking hard enough at the gulls legs.

In addition to the colour-rings I've seen three more Caspian Gulls recently. The adult below seen last Wednesday, most likely a female, was a really smart looker. Compare the flesh coloured legs to the bright pink legs of the Herring Gull to its right. Its bill was lovely and slender. Faint streaking is just visible on its lower neck. This is a feature of younger Caspian Gulls, but also shown by some adults in autumn.

A new first-winter appeared amongst the Great Black-backed Gulls that were gathered on the shore. It was camera shy and hid behind its larger cousins.