Today it rained all day, which is a little unfair for those who worked in doors throughout the heatwave, which ended last night. Funny how it rains so often on a Saturday.

Anyway I still went to Shawell this morning. I had just mentioned to Steve Nichols that an early juvenile Caspian Gull would be nice and then wham I spotted one.

Juvenile gulls can be tricky, but there are some clues that can help with identification. In the very poor quality image below you can see the very plain brown upperparts with the trademark Nike 'Swoosh' across the upper edge of the greater coverts. The head is already fading to white and the tertials have broad white edges almost like finger nails. The juvenile bill does not look quite as long as some adult yet. The feathers near the bill wear with age, which makes the bill look longer. This is probably the earliest record of a juvenile Caspian Gull in Leicestershire. Post juvenile moult will start in August, but right now it is a really fresh looking juv - trust me not the crappy photo. 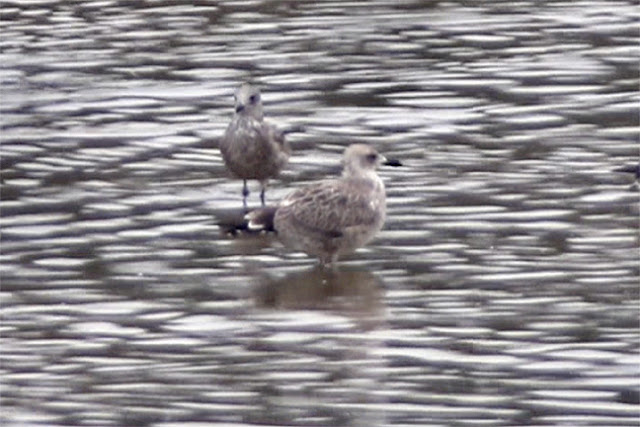 Posted by Carl Baggott at 16:29 No comments:

My good friend Morten Helberg invited me to Finnmark to look at some lovely Lesser Black-backed Gulls. Well I'm always up for an adventure, so I agreed instantly. Finnmark is the northern most region of Norway and it sits inside the Article Circle.

Our destination was a small island called Loppa, which is the location of one the northern most breeding localities for Lesser Black-backed Gull. We travelled to Alta by plane via Oslo and then caught a bus to Oksfjord and finally we took a small fast ferry to Loppa.

A few people live at sea level on Loppa, but much of the island is wild - there are no shops, fast food restaurants or bars.

Morten and I camped for the week in a Lavvu tent. We took all our food with us and collected water from a small stream. Our choice of campsite proved to be very good, as it afforded us shelter from some very strong northerly winds. I was proud to learn that our site was used by Vikings in the past.

Rain was a constant feature of the week and the rain on the second day was the worst. We ventured up on to the plateau and although we could hear lots of birds but seeing them was a different matter due to poor visibility. We located a few Lesser Black-backed Gull nests, but on the whole they were having a poor breeding season. The main thing we both learnt that day was that modern waterproof boots leak when walking across wet tundra and crossing soaking mires. Our feet were constantly wet when out in the field even though we wore plastic bags over our socks.

The rain continued all night, but by the morning it had abated and so we returned to the plateau via steep grassy slopes at the far end of the island. We passed cliffs along the coast that were the haunt of a gang of massive White-tailed Eagles.


The majority of the island is an upland tundra area, which is carpeted in Cloudberry flowers during June. Many other tundra plants were flowering including Arctic Yellow Violets. The lower sections are thinly forested with small birch trees.

In the land of the mid-night sun birds sing all the time. From the tent it was great to hear Curlews calling and chatting to each other, Snipe drumming and calling, Brambling and Redwing singing and Rough-legged Buzzards noisily defending their territories.


During our third day we got a better look at the birdlife up on the plateau. Impressive numbers of Great Skua were nesting and we managed to ring some adults and chicks. Arctic Skuas also appeared to be doing well with many of them defending territories. Whimbrel whistled from many locations, but the star birds were a pair of Lapland Buntings that obviously had young nearby.

We were able to have a better look at the two Lesser Black-backed Gull colonies today. The colonies are mixed Baltic Gulls and an unknown sub-species. It is possible that the pale-mantled birds have arrived from Russia although just as likely to have come from western Europe. There is a great deal of overlap between graellsii, intermedius and heuglini. The pale-mantled birds out numbered the dark-mantled birds. One bird that was originally colour-ringed on Loppa has been seen in Israel during winter. We saw the 'Israel bird' during the trip, but it wasn't easy to decide its sub-species. I do suspect, however, that it is either a graellsii or an intergrade between fuscus and graellsii

Amazingly I saw two birds during the trip that I have also seen at Shawell.

The fourth morning started with a burst of sunshine, which gave some butterflies an opportunity to get active. I identified them as Arctic Ringlet Erebia disa. Their flight period lasted about two hours before the sun disappeared. A smart male Bluethroat was singing from an exposed branch of one of the Birch trees on the edge of the treeline. Sadly the weather soon deteriorated and I came down from the plateau before lunch. We were confined to our tent for a few hours, but eventually things improved slightly. Morten tried enticing the gulls visiting the beach with some bread whilst I walked to Loppasanden to look at the Lesser Black-backed Gulls on that beach. I also came upon a nice Short-eared Owl and I took a few photos of a very tame Pied Flycatcher that was nesting close to our tent.

We were back up on the plateau the next day with the highlights being a pair of Gyr Falcons over the cliffs and sea and another sighting of the pair of Lapland Buntings. The cliff faces on the northern side of Loppa are quite dramatic. I look a little nervous posing by the edge of the cliffs don't you think? Large numbers of Razorbills were nesting on the cliffs and both Puffins and Guillemots were also seen. 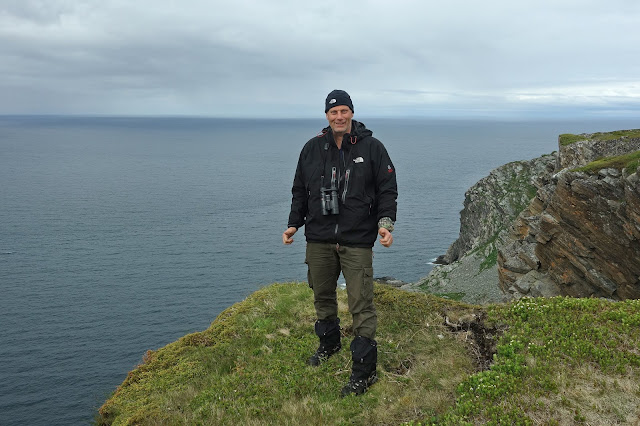 On the last day, I was keen to photograph a Willow Grouse and luckily I chanced upon a female. She had a brood of small chicks and so I soon moved on. The weather once again deteriorated and I was the first to descend from the plateau with Morten arriving back at the tent looking a little wet about an hour later. A strong northerly wind battered the tent and the temperature dropped sufficiently to leave both Morten and I short of sleep as we shivered in our sleeping bags.

This was an excellent trip and I feel very lucky to have been invited to this wondeful country once more by Morten. Thanks Morten! 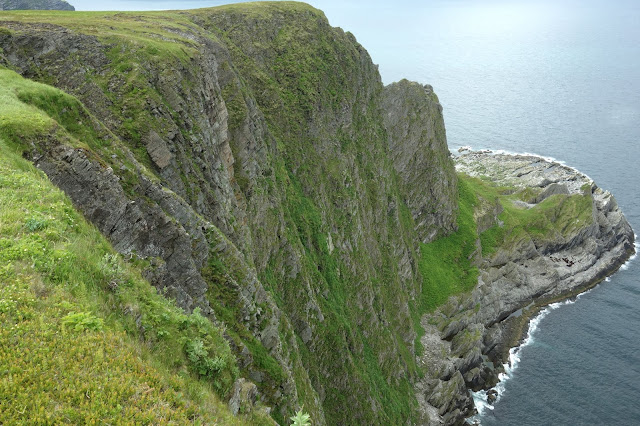 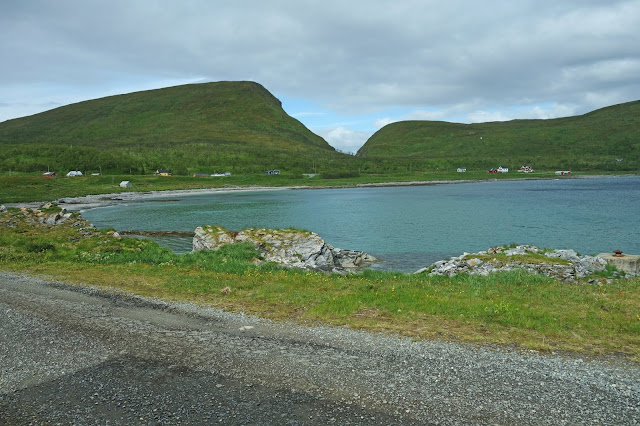 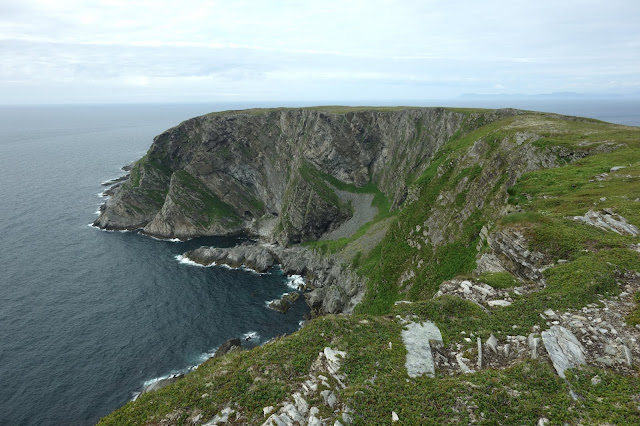 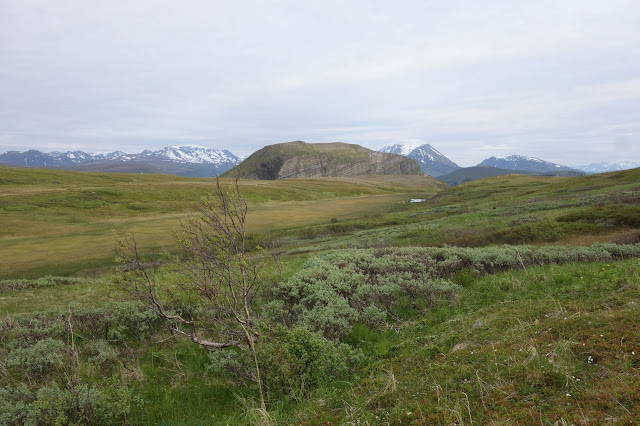 Our journey back to Alta was exciting, as when we arrived at Oksfjord we learnt that our next boat had been cancelled. Luckily the lovely owner of the cafe offered us a lift, as she was planning a trip to Alta at some point that week. This was very fortunate as the next bus was too late to get us back to the airport for our flight.

Morten was up for more adventure at Alta. He had me wading crotch deep across to an island where we saw about six Temminck's Stints. We arrived back at our hotel just before mid-night and once again we had wet feet!

I remembered the saying eventually that I was trying to tell Morten - Who's the fool, the fool or the fool that follows the fool?

Fantastic stuff - thanks for reading 😊