I returned to Shawell this morning and the juvenile Glaucous Gull I saw yesterday was once again in the sand quarry off Gibbett Lane. Many of the gulls were on the east side of the landfill site perhaps due to the wind. These days the gulls don't hang around after lunchtime and the A5 Lagoons are very hit and miss.

As well as the Glaucous Gull, a first-winter Caspian Gull was there for its second day.

Steve Nichols and I also witnessed a dog fight over the landfill site between two Peregrines.
Posted by Carl Baggott at 20:22 2 comments:

Visitors From the Arctic

I had a bit of time of work today and as usual I went over to Shawell. This winter has proven to be good for white-winged gulls, but they are not the only gulls that visit us from the Arctic in winter. I spotted a Herring Gull at the lagoons that was wearing a black colour ring with a data logger attached to it. The colour-ring's code was JU683. Black colour-rings with the first letter being J always come from Norway. I saw another Norwegian colour-ringed Herring Gull JX511 last November, which had a data logger attached to its colour-ring and that one came from the very top of Norway close to the Russian border. JU683 was also ringed during the breeding season at Hornøya, Vardø, Finnmark - 2577 km away. 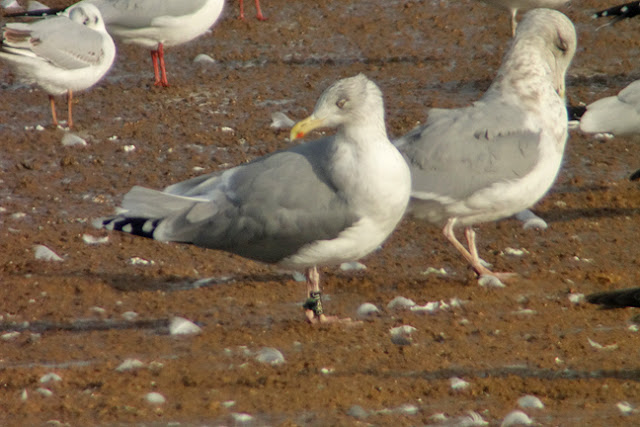 Another juvenile Glaucous Gull was at the sand quarry today. This was the smallest of the three seen so far.

Posted by Carl Baggott at 21:37 No comments:

Glaucous and Iceland Gull at Shawell

This morning didn't start to plan, as I was expecting sunshine not fog.

Nevertheless I set off to Shawell. The gulls were obviously lost in the fog somewhere, as there were none in the sand quarry. There was a few at the A5 Lagoons and I managed to read three colour rings including a re-read of the Herring Gull that was my 1000 colour-ringed gull at Shawell.

I moved back to the sand quarry opposite Gibbett Lane mid-morning and some gulls had gathered there. The first scan revealed nothing unusual, but as I scanned back to the left I picked up a juvenile Glaucous Gull. It was paler than the one I saw last week. Its bill lacked a fine pale tip, so it should be a second calendar-year bird.


Something spooked the gulls and they all took off. Amongst those that eventually returned was a juvenile Iceland Gull.

Steve Nichols managed to arrive in time to see the Iceland Gull, but another chap arrived too late to see it. Shawell is a very difficult location to twitch gulls, as the area they use is large and they are mobile. I do so well because of the time I put in and because I wait for the gulls to come to me.


I have now found 14 Iceland Gulls at Shawell and 15 Glaucous Gulls. In total I have seen 16 of both Iceland and Glaucous Gull there.
Posted by Carl Baggott at 17:39 No comments:

I'm really pleased with the results from my trip to Bucharest. It was very educational, especially as I was able to study the behaviour of the Caspian Gulls in their natural domain. Unlike in England there were sufficient numbers to study them behaving as they do with their own kind. 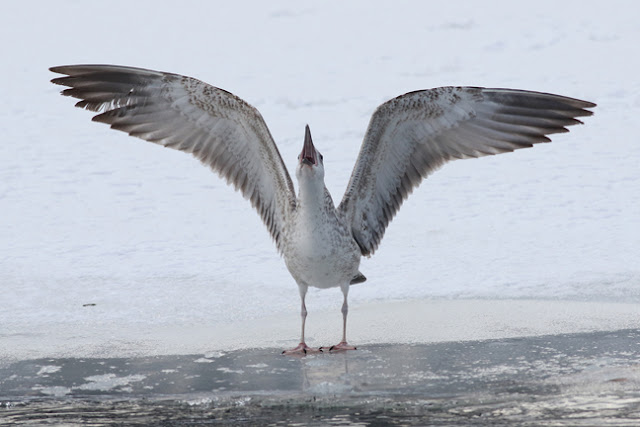 Posted by Carl Baggott at 20:21 No comments:

A Trip to Romania to See Some Caspian Gulls

The challenge of identifying Caspian Gulls is understanding how variable they can be and understanding features that may be OK but could also be a result of hybridisation.

The closest Caspian Gulls to Britain come from the German mixed gull colonies, so we receive a few challenging individuals here and if you are not careful you can become become paranoid.

Anyway I decided to go further east after travelling to Germany last April. I chose Bucharest in Romania and I wasn't disappointed. Dawn and I stayed in the Herastrau Hotel in the Hesrastrau Park. A large lake in the park attracts many gulls.

It had snowed for 14 hours before our arrival, so the park looked as pretty as a picture. During our four day stay we never left the park apart from to visit another park across the road. As well as the gulls there were plenty of woodland birds including five species of woodpecker and I scored with Pygmy Cormorant, which was a lifer. The park was large enough for us to walk 11 miles one day. 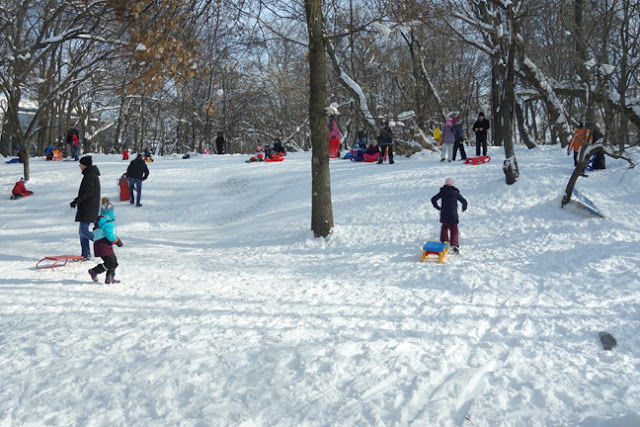 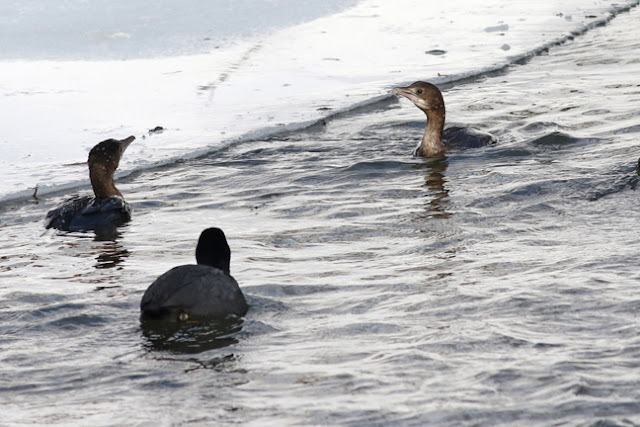 The Caspian Gulls put on a fine show and as well as getting lots of pictures to help unravel the complexities of identification I also got some stunning sequences of them fighting. 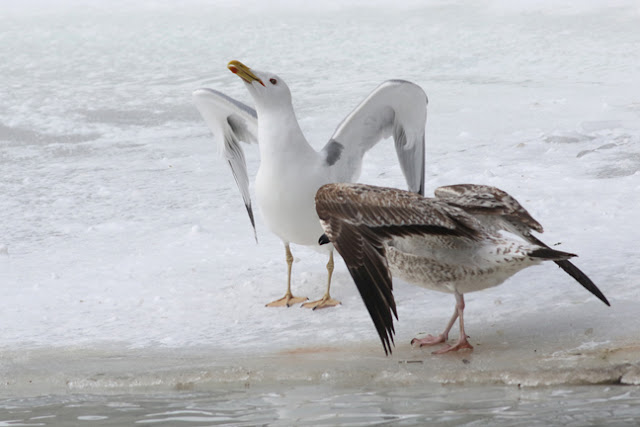 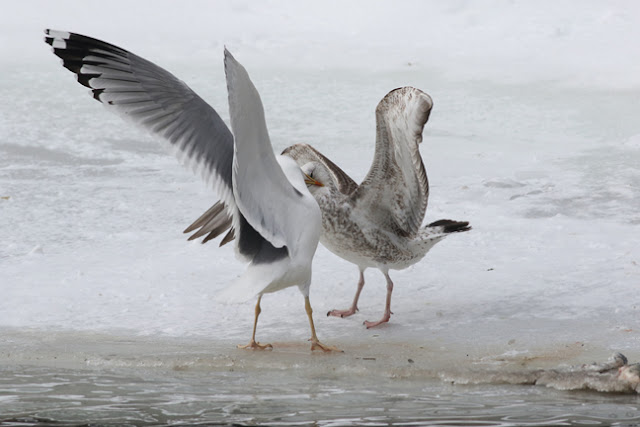 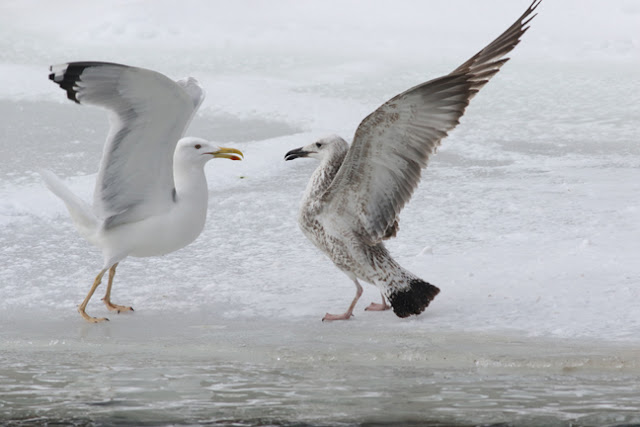 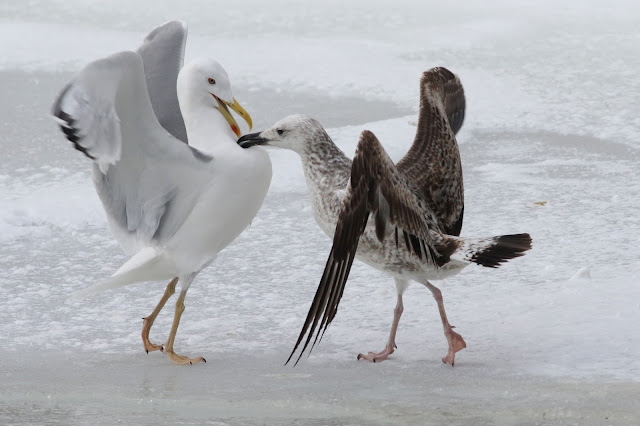 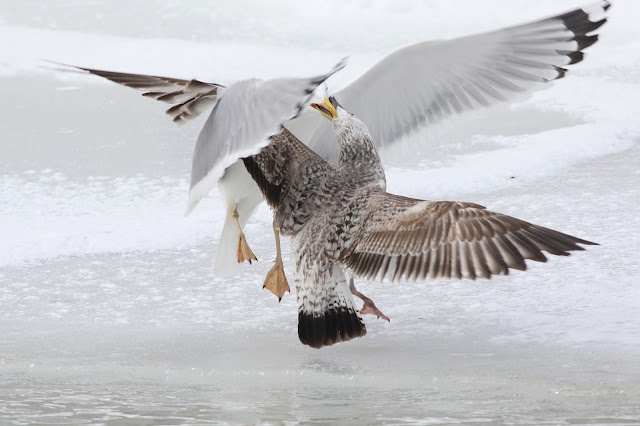 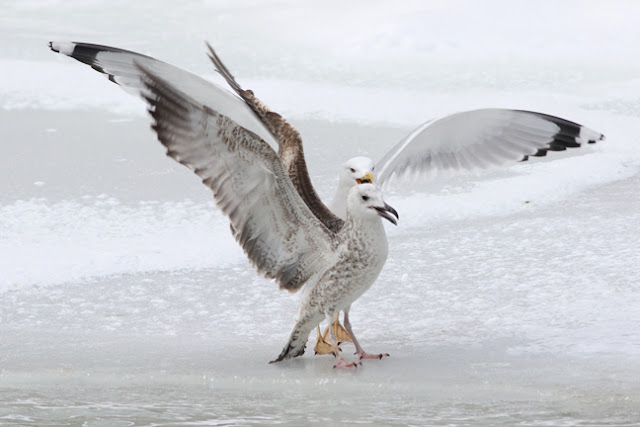 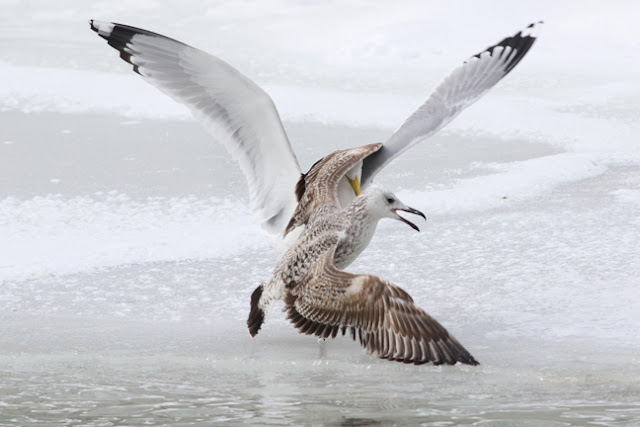 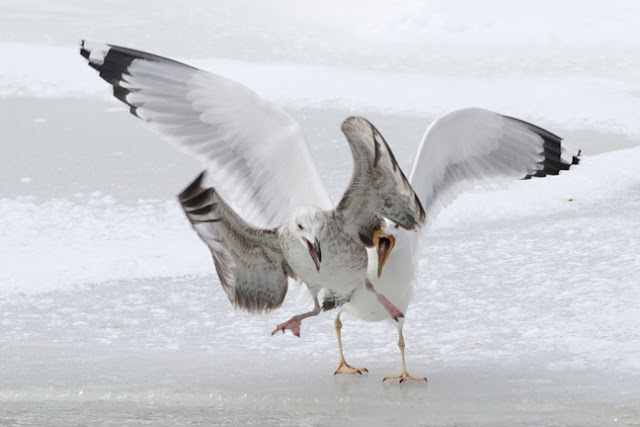 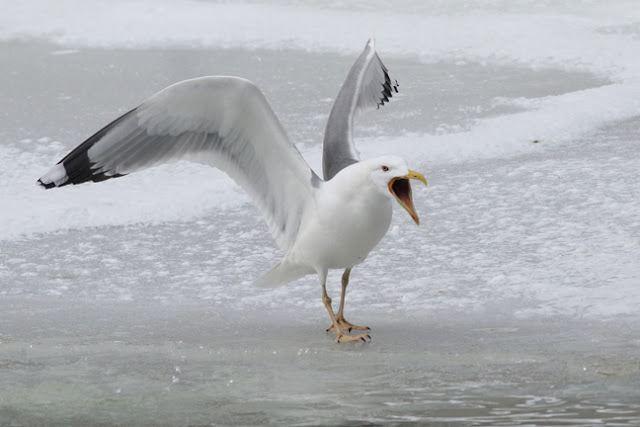 It was blowing a gale today when I stopped off at Shawell on my way to Northampton. Most of the gulls were hunkered  down in a field very close to the village. I stopped briefly and managed to spot a large adult male Caspian Gull amongst them. I didn't hang around, as it was very windy.

I moved to the lagoons where there was only about a 100 gulls on the water and most were mobile due to the wind. I almost left straight the way, but I decided to see if any gulls were on the bank. The gulls were strung out in a line towards the bank and the last one was a mighty juvenile Glaucous Gull.

Since 2013 I have been studying and photographing Yellow-legged Gulls at Portimao, which is in southern Portugal. The fish harbour there attracts many gulls and they are generally quite confiding and allow close approach.

Amongst the gulls are some tricky individuals that don't quite conform to the rules. The first-winters can be very difficult to separate from Lesser Black-backed Gulls. Some of these are not typical of the nominate Larus michahellis michahellis and a few may well be L.m lusitanius, or be closely related.

For anyone with an interest in these gulls I have put together a gallery of images.

Since January 1st I have visited Shawell a few times, as I'm sure you've already guessed. No white-winger yet, but there's loads of time.

The gull numbers are building up well. c6000 Black-headed Gulls and well over 3000 Herring Gulls have painted the site pale grey. Amongst these I've pulled out four Caspian Gulls, two second-winters and two adults. A first-winter gull could well be a Caspian, but it may not be from pure stock, so I haven't made my mind up about it yet.

Amongst the Herring Gulls are some obvious eastern birds. The Finnish ringed one is still around and several adults have nice yellow legs, long wings and a Caspian Gull like primary pattern. I see this type every January and speculate that they come from the Baltic area. Colour ringed Herring Gulls ringed in northern Norway confirm that northern argentatus HGs are visiting us in Leicestershire.

Below is a video I took yesterday afternoon during a brief stop off at the lagoons. I was surprised to see iced up areas. The first gull is a stocky second-winter Caspian Gull, then a first-winter argentatus. This should be from northern lands, as it is still in juvenile plumage. They breed later, so the young gulls are behind in their development compared to those born further south.

The second video shows a first-winter Caspian Gull regurgitating its lunch. its a good job it did. Thank goodness we are trying to cut down the amount of plastic bags we use. I took this video just before the end of 2016.

If not already set to HD then change the setting for best results.