I made another visit to the Shawell A5 Lagoons at the weekend, which proved very fruitful. I read the codes on six colour ringed birds, including a Lesser Black-backed Gull ringed in southern Spain and another in Norway. I also read the ring on an adult Herring Gull, which was good as Lesser Black-backed Gulls account for far more ringed gull species at the site. This one had been ringed in Gloucester, so not quite so exotic as the other two birds. I have now read 65 different colour rings so far this year at the site.

READ MORE
Posted by Carl Baggott at 21:01 No comments:

The first entry on my blog was a trip report from Svalbard during July 2011 and this has proved to be my most popular topic so far. I have recently been spending time going through lots of photographs and have added many new ones to my Svalbard collection. I have chosen a few that you will hopefully enjoy and pasted them below:

READ MORE
Posted by Carl Baggott at 19:51 No comments:

I've just had another look through some photos I took last February and I had missed editing a few good images of some Iceland Gulls. As a result I thought I give anyone interested in gulls a treat. Apologies for scaring the rest of you off. The photos were taken at Peterhead Harbour, Scotland.

The Gull From Atlantis?

On September 29th I saw and photographed an interesting gull at Shawell A5 lagoons. I immediately became interested due to the extensive streaking on it's head. This was far more extensive than on any of the 60+ Yellow-legged Gulls (Larus michahellis) that  I've seen this autumn at the site. The mantle colour was also interesting as it appeared quite dark. You can get an idea of the mantle colour from the photo below, which gives a good comparison with Lesser Black-backed Gull. Could this bird be an Azorian Yellow-legged Gull (Larus michahellis antlantis)? 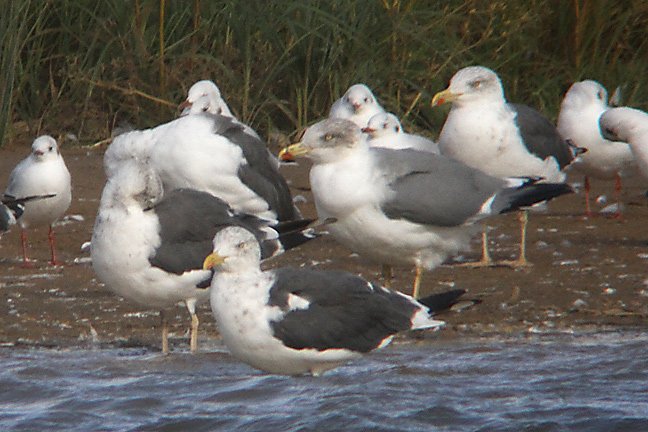 READ MORE
Posted by Carl Baggott at 19:45 No comments: