The Polish Bird Ringing Centre has replied very quickly to my report of the red colour-ringed Caspian Gull. It was colour-ringed as a chick on May 15th this year near Paczkow, Poland. Interestingly it was sighted by Reinhard Kunow on August 27th at Sierksdorf, Germany.

Reinhard managed to photograph it when it stopped off in Germany - see below.

READ MORE
Posted by Carl Baggott at 20:02 No comments:

Last Visit to Shawell for 2014

I couldn't resist one more visit to Shawell before the year's end, so yesterday morning I donned my thermal underwear etc, and trotted off.

This was the first day the tip was up and running after the Christmas break and obviously most of the gulls had got the memo, as plenty had turned up for the feast.

I spotted a first year gull swimming in the shallows and I spotted it had a red colour-ring. It took ages for my Jedi mind tricks to will it to climb out of the water, but eventually it obeyed me. My first impression of the gull was that it might be a Caspian Gull or a hybrid.

It wasn't a classic but the more I looked the more I thought it could be a Caspian Gull. It was impossible to read the colour ring as it was wet and the sun was reflected by the water. The only figure I could read was a 1. Something spooked the gulls and I lost it amongst the hordes.

Luckily I soon found it again amongst  a group of gulls resting on the shore slightly closer to my position. It didn't land on the shore, but stood in the shallow water at the edge.

READ MORE
Posted by Carl Baggott at 20:26 No comments:

Review of the Gulls at Shawell During 2014

During 2014 my fascination with gulls at Shawell continued unabated. The standout highlight for me was finding three juvenile Caspian Gulls during August. The subtle differences between the juveniles of other similar species and Caspian Gull juveniles take time and practice to appreciate.

My total gull species recorded was up by one this year thanks to a sighting of a Ring-billed Gull. In all I recorded 11 species and of these six were seen on most occasions.

I made visits during each month and found once again that there is no gull season, as interesting gulls can turn up at the site at any time.

All gulls found by myself unless indicated otherwise.

READ MORE
Posted by Carl Baggott at 10:17 No comments:

Before I start eating and drinking, I would like to thanks all those who have stopped by to read my blog or look at the pictures during 2014. I would also like to wish you all a Happy Christmas and a Prosperous New Year - Ave a Good Un! 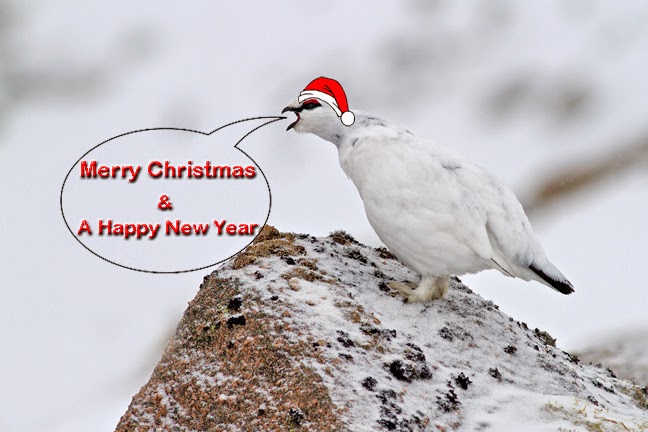 Posted by Carl Baggott at 18:15 No comments:

Herring Gull numbers are building up and just as in late December 2013 there are at least two thousand visiting Shawell at present. The throng of gulls at the tipping area is a wonder to see, but it is not a great place to practice your identification skills, as the gulls are constantly on the move. A first year gull with a soft brown overall colour and brownish tertials and primaries grabbed my attention for about two seconds before it was sucked up into the mass of gulls. Anyway whatever my first impressions were I never saw that gull again. On the periphery of the tip I did see a smart first-winter Yellow-legged Gull that had solid brown coverts and tertials that contrasted nicely with its grey saddle. I had not seen a first-winter for a while, so it was good to see another.

There was no sign of the Iceland Gull that I found on Wednesday at the tip, so it was time to move to the A5 Lagoons and hope for better luck. It didn't take long to find a smart fourth-winter Caspian Gull - a new one.


This Caspian Gull was a real classic: a super slender long bill, a small head with a pair of dark eyes and an almost fully adult set of primaries. It hung about on the largest lagoon for over an hour, which gave me plenty of time to study it.

At dead on 11:00 something, probably a Common Buzzard, caused the gulls to panic and amongst the first group to settle back down on the water was the third-winter Iceland Gull. It must have been hiding on the other lagoon.

Almost as soon as it arrived it flew off again. It then returned briefly at about 11:30 and flew off again only to return about 15 minutes later. This time it stayed for about an hour.

The light was brighter today, which made the Iceland Gull look much more ghost like. Remnants of the immature plumage were still visible on the tertials and greater coverts. The paleness of the eyes was easier to see today as well. The legs are pink, but in certain lights they look a little paler than normal for Iceland Gull.

After the Iceland Gull departed, I noticed a striking gull near the shore that proved quite challenging. It was as clean looking as the adult Yellow-legged Gulls are at present. However, its head shape was wrong and so was its primary pattern. Its head was quite small and its bill was very long. The bill was a similar shape to a Herring Gull's, but it seemed too long. Its legs were a pasty yellowy orange, not right for Yellow-legged Gull. This gull may well be a hybrid Caspian x Herring Gull, but it is difficult to be 100% certain - what do you think? 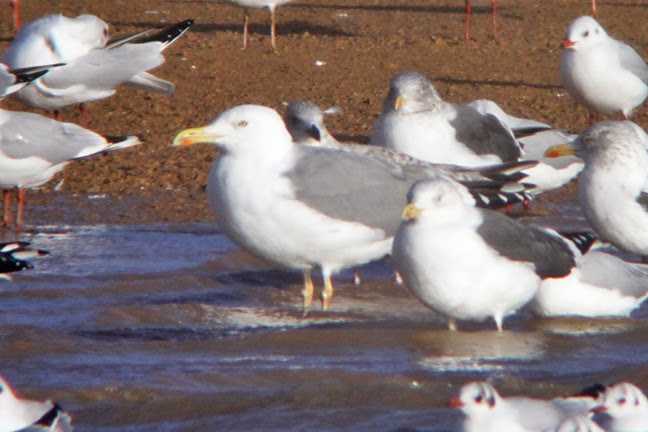 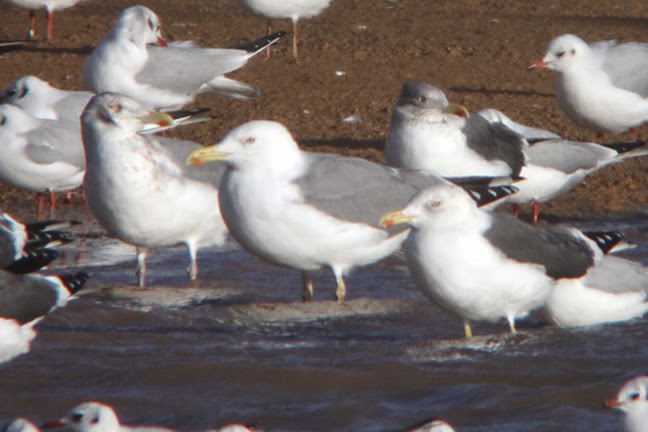 Posted by Carl Baggott at 19:32 No comments:

An Iceland Gull Finds its Way to Shawell

I had my usual Wednesday lunch break today at Shawell and I spotted what looked like a 'white-winger' resting amongst some gulls near the tip. It was facing me, so I couldn't see its primaries. Before I had the chance to confirm its identification, something spooked the gulls and they all took to the wing. Many were heading towards the A5 Lagoons, so I followed.

Hundreds if not thousands of gulls were at the lagoons, but initially I couldn't see any sign of the really pale bird. Working through the gulls I came across a second-winter Yellow-legged Gull and what may well have been a new hybrid Caspian x Herring Gull, but I didn't spend much time looking at it as I wanted the Arctic Wanderer.

It didn't appear to be at the lagoons but suddenly, as if by magic, it appeared on the far shore - it was an Iceland Gull - a result of last week's 'Weather Bomb'? Hopefully the first of many.

I have aged it as a third-winter, because of the bills lack of yellow and the patchiness of the coverts.

It was bloody freezing today at Shawell, but I felt it was my duty to keep the gulls company. Its not that often that you have to scrape the ice of your car windows during an afternoon, but that's what I had to do after finishing 'sea gulling'.

I managed to read the colour rings on five species of gull today, which may be a record for me at Shawell. The much hoped for white-winger didn't appear, so perhaps the 'weather bomb' has not fully exploded yet. The weather map earlier in the week looked great for pushing a few towards us but we'll have to be patient.

Since mid-October I have seen at least one Caspian Gull on each of my visits to Shawell, but today it looked as though I would be unsuccessful. Many gulls were out of site from my position, but after a bit of argy bargy amongst the gulls on the top of the bank I spotted the interesting regular third-winter lying down. It is interesting because it looks more like a fourth-winter: its tail still has most of the dark band, instead of a long white tip to its longest primary it has a large white mirror with a black tip to the feather and on the outstretched wing the black extends as far as the Alula. It could be a fourth-winter, but the extent of the black in the tail makes me feel more comfortable with third-winter.

READ MORE
Posted by Carl Baggott at 21:02 No comments:

Four maybe five Caspian Gulls were at Shawell today. The first was difficult to clinch as the sun was hampering viewing at the landfill site. The gull did, however, appear ok, but I couldn't photograph it amongst the melee on the tip face, so I'm not happy to claim it for certain.

I joined Steve Lister at the lagoons and soon found a gull to flag up as 'an interesting one', this is the code Steve and I use when we find a Caspian Gull - long story. Its head and bill were spot on, but its legs looked a little short. Whilst it preened we got an extended view of P10 and this matched the correct pattern for Caspian Gull. Steve commented that its legs were pink, but I judged the legs to be pasty pink rather than bubble gum pink. In the paper on Identification of Caspian Gulls, Part 1 Typical Birds, Gibbins et al it states: 'There is complete overlap in leg colour between cachinnans and the Herring Gulls of the eastern Baltic (from pure pink to lemon yellow) so this feature is of limited value'

I have done a quick trait score on the bird and it scores within the range of pure Caspian Gull. The legs are unusually short, but there is great variation in leg length amongst the other large gulls, so there is likely to be variation amongst Caspian Gulls also.

READ MORE
Posted by Carl Baggott at 21:11 No comments: