An early start at Brascote Pits this morning paid off. Luckily I looked closely at a group of Mallards, as hiding amongst them was a Garganey. The upper wing showed a pale grey area and the white bands are broad and so it looks to be an eclipse drake.

It was very wary and flew for no apparent reason, but only as far as the adjacent pit.

Things were quiet at Shawell, but an adult and juvenile Hobby made the effort worthwhile. 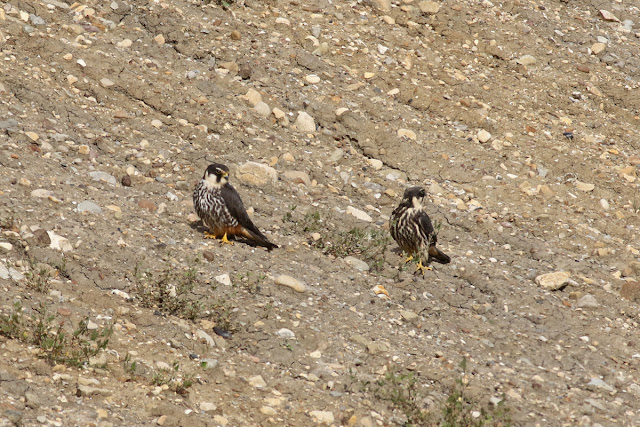 Posted by Carl Baggott at 19:59 No comments:

Another session after work on Thursday at the A5 Lagoons proved good. I have found a way of getting a little closer to the gulls, and as a result the colour-ring reading is a easier. Plenty of familiar birds from previous years and some new ones for my ever growing spreadsheet were seen. I have now made 4000 colour-ring readings at Shawell. A moulting juvenile Caspian Gull posed well and amongst a flock of gulls that dropped in last thing was a first-winter Mediterranean Gull.

Nick Sharpe found two Whinchats yesterday at Brascote, which continued the run of good birds in my local area. Adey Baker and I along with Nick looked for them early in the evening, but had no luck. However, David Mitchell stuck with it and saw three Whinchats and a couple of Wheatears after 8.00pm.

Before work this morning I revisited the site and was very pleased to find a male Redstart and two of the three Whinchats.

The photo of the Redstart definitely belongs in the record shot category.

After yesterday's Pied Flycatcher it was great to see two Redstarts at Croft Quarry. It had been seven years since the last one at Croft Hill. Foolishly I had made the rookie error of forgetting to change my camera battery before leaving home, but luckily Adey Baker was on hand to record the event.

Below are the sightings for south-west Leicestershire.


1.            Redstart: a scarce passage migrant to the area with spring records being the least common. Records were more frequent historically. Breeding was recorded at Croft in 1945 and 1946 and at Hinckley in the latter year. Further breeding records came from Market Bosworth in 1951 and 1953 plus Stoke Golding in 1952. Breeding was also recorded at Market Bosworth in 1972. (Birds of Leicestershire and Rutland).

During the last 10 days I've being having a colour-ring reading extravaganza at Shawell. I've made about 80 readings and for once I'm seeing the birds close. Norwegian Lesser Black-backed Gulls (Larus fuscus) made up a significant percentage of the colour-ringed gulls recorded; including the first juvenile. Caspian (Larus cachinnans) and Yellow-legged Gulls (Larus michahellis) are giving themselves up a little easier at present, as they are already carrying out there post-juvenile moult, whereas most Herring (Larus argentatus) and Lesser Black-backed Gulls still in juvenile plumage. Some of the latter two, however, are moulting a few scapulars, so care has to be taken.

The gull below gets me going every time, as I think I have a Yellow-legged Gull with a colour-ring. However, A+G is a hybrid (parents LBBG and LBBG x HG). Ringed in Gloucester as a chick in 2014.

Posted by Carl Baggott at 07:43 No comments:

A quick visit to Croft Hill yielded a longer than expected stay and a lovely female/1st-winter Pied Flycatcher. 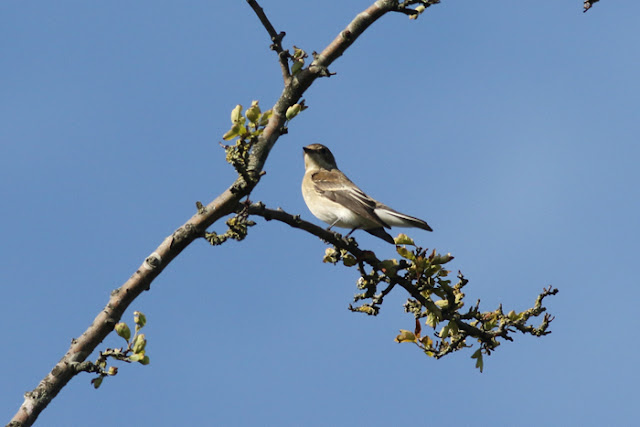 Another good session at Shawell after work tonight.

The photo below shows some nice features that aid identification of juvenile Caspian Gull. A plain pale head with just a slight darkening around the eyes (not a mask); a long and fairly thin bill (this one had an obviously long bill, but many juvenile Casps don't have exceptionally long bills); very plain brown coverts with its greater coverts being very dark; already replacing some scapulars with grey second generation feathers; a whitish breast and belly and spindly legs.


Here a splendid video of the Caspian Gull (change to HD quality if not automatically done):

Posted by Carl Baggott at 21:56 No comments:

Gulls are a winter thing aren't they? Wrong, the summer can also be a good time. The 'white-wingers' are much easier to identify than the summer collection, but it's the ID challenges that make it fun. Lots of fresh juvenile gulls are arriving at Shawell at the moment and amongst them are some young Caspian Gulls. Juvenile gulls are challenging to most birders, but with a little practice many can be identified. there are around half a dozen juvenile Caspian Gulls visiting the area at present - maybe more.

The beauty below was there on Wednesday evening, but it never quite posed perfectly. You can just see that it has replaced some scapulars with grey second-generation feathers. The plain brown coverts are also obvious, which is a feature of juvenile and first-winter birds. 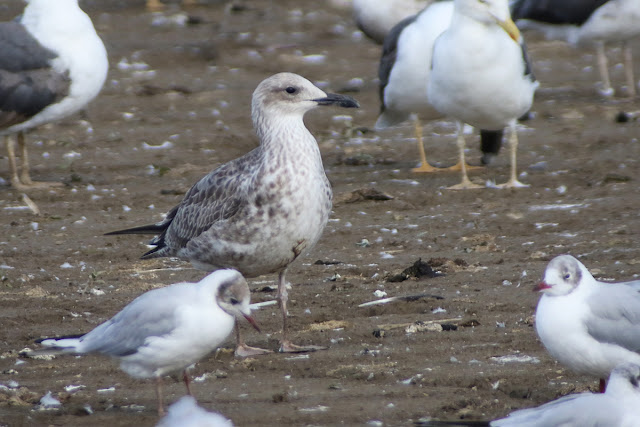 A colour-ringed German bird was also present. X18J was OK as far as the plumage goes for a Caspian Gull, but structurally it wasn't quite on the money. They can alter of course as they age, so I'll give it the benefit of the doubt for now. 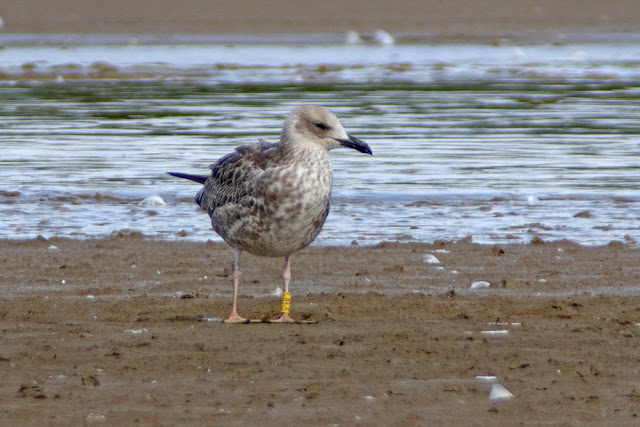 The sandpit on Gibbet Lane is flooded at present, which is frustrating as far as colour-ring reading is concerned. As a result I have been visiting the A5 Lagoons and luckily so have the gulls. A few evening visits have netted 30 colour-ring readings.

Amongst the colour-ringed birds was this one that breeds in The Netherlands. It is a failed breeder, so has started its wanderings already. It was a good sighting for the scheme co-ordinators, as it is wearing a data logger on its back (not visible in the photo, but I did see it). This sighting helps to support the results from the logger.

I have also squeezed in a few early morning visits to Brascote Pits. Staying with gulls there was a nice collection there on Thursday morning, which included six Yellow-legged Gulls and a juvenile Mediterranean Gull. 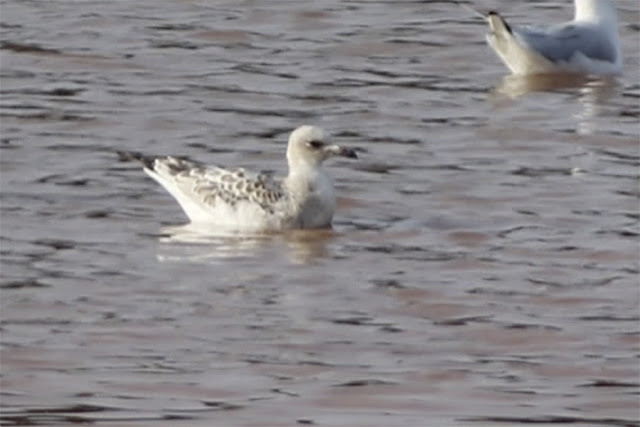 There are also good numbers of Small Red-eyed Damselflies there and for the first time I saw one that wasn't out of floating plants. 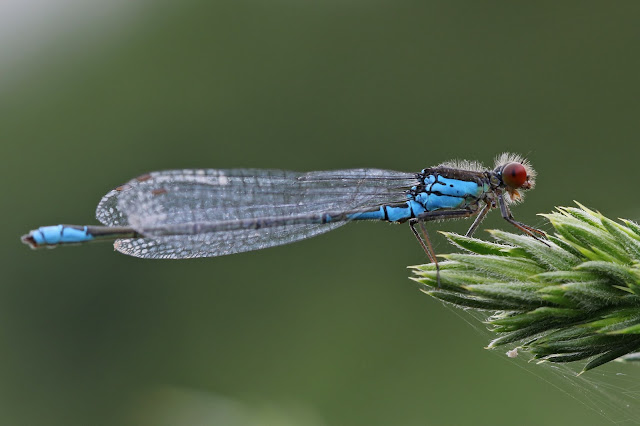 Posted by Carl Baggott at 12:57 No comments: