Are the Number of Ravens in Leicestershire still increasing?

The sound of a Raven calling is less of a surprise when heard in Leicestershire than it used to be, but it is still great to hear. Its a sound that carries down the ages and reminds us of a wilder past.

I am lucky enough to hear them most days and luckier still to be able to get close to them. A pair have again nested on a large cliff face that I can gain access to.

The young Ravens are almost old enough to take flight and survey the world as only Ravens can. I took the opportunity to take some photographs this morning. I had seen four beaks poking up in the nest last week, but if you look closely at the photo below there is actually five of them. 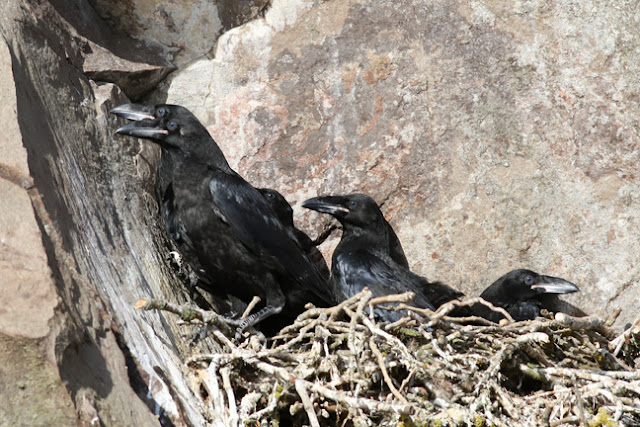 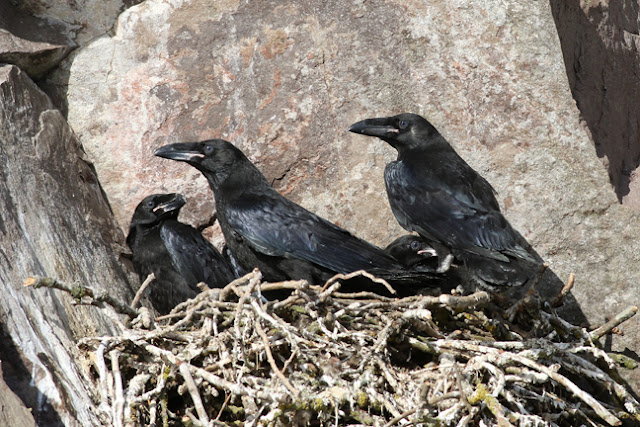 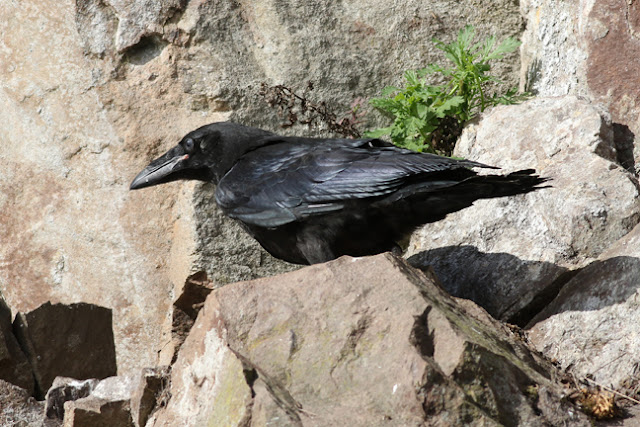 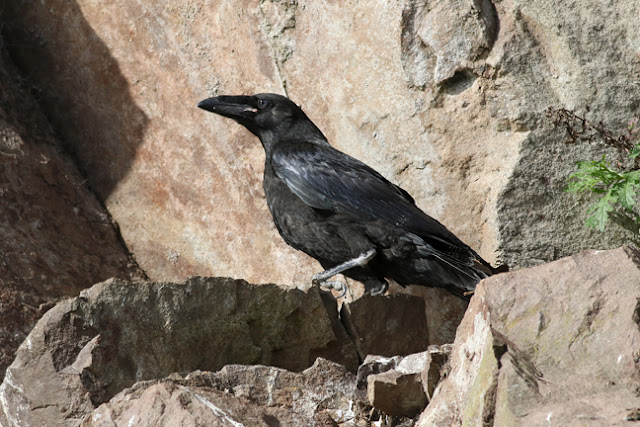 Do you think the numbers of Ravens in Leicestershire are still increasing?

Email ThisBlogThis!Share to TwitterShare to FacebookShare to Pinterest
Labels: Ravens in Leicestershire

One of the male Ring Ouzels was still present at The Outwoods today. Two males were originally found there by Adey Baker on April 8th, but just one of the males was still there today (24th). That is a stay so far of 17 days.

The bird is still favouring the second field after the riding stables and it shows by the safety fences in the far corner. 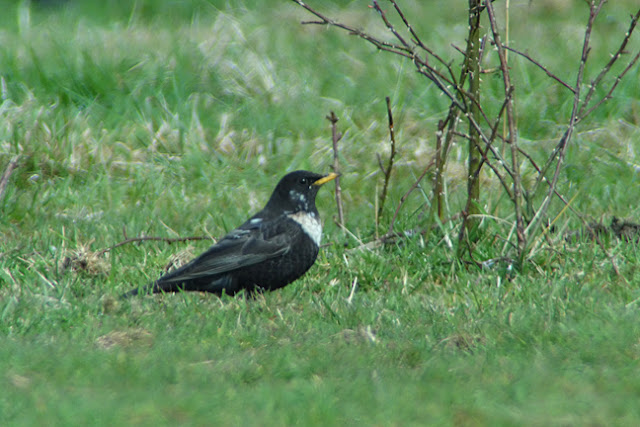 Posted by Carl Baggott at 17:09 No comments:

There was nothing else to do but to head back to Shawell today after my excursion to Germany last weekend to learn my about my beloved Caspian Gulls.

The first-summer Caspian Gull that I first found on April 2nd was still around and a new first-summer was also there today. 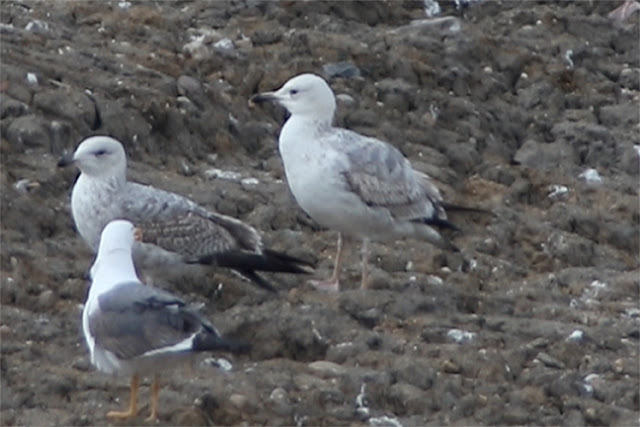 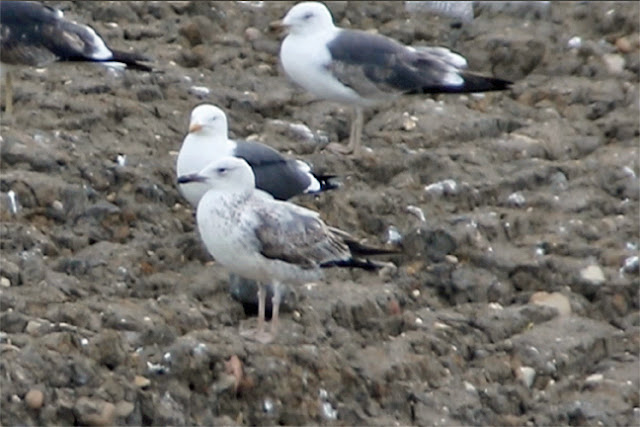 The INternational Gull Meeting was held at Bad Düben Brandenburg Germany. I joined Peter Rock from Bristol at Heathrow and we took an early morning flight to Munich and from there we continued on to Leipzig.

Over the three days we enjoyed some excellent talks and had a day in the field watching the gulls of the area.

At the first site, Muhlberg-See, we enjoyed good but distant views of a mixed gull colony. Just to give the identification enthusiasts, me included, a headache we watched a pair of gulls copulating and they weren't of the same species. The colony didn't appear to be doing too well and the appearance of a Fox on the island perhaps explained why.

After enjoying the gulls, a Ring Ouzel and lots of kites we moved on to Grabendorfer-See. Here a large colony of mixed gull species could be seen, but again distantly. With the aid of a remote camera we got views of the gulls on a large screen in the information centre. We even managed to read a colour-ring using the camera.

The next site, Sedlitz-See, offered us a much better chance to see the gulls. We took to the water at this site in an odd shaped boat. It was raining hard by this time, but we managed to sink a few beers on the way out to the islands. The lucky ones managed to get under cover. 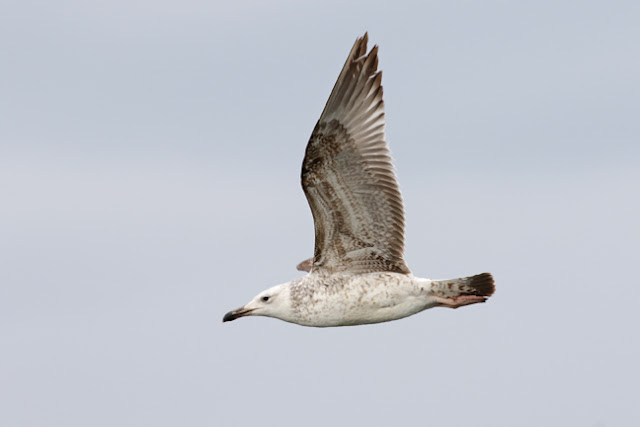 As we neared the islands we could see the gulls and we soon lured them to us with a few loaves of bread. I managed to take loads of images and most were identifiable as Caspian Gulls. I wasn't quite prepared for how massive some of the male Casps were and their bills were very brightly coloured. That may have something to do with the iron oxide in the water?

The gull below is very interesting, its wings are far plainer than I would expect, but I am told by my friends in Europe that it is within the known variation. 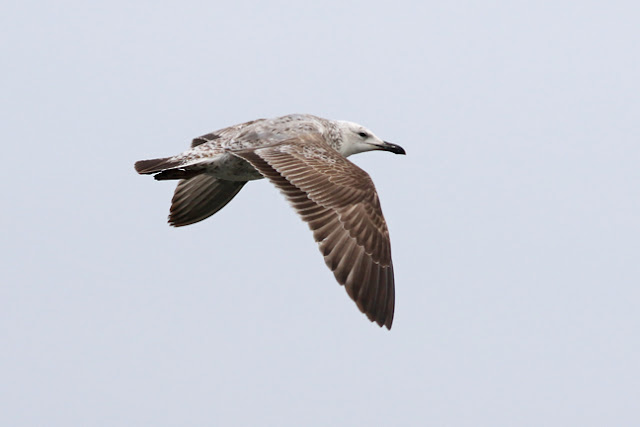 As I said, the adult Caspian Gulls were real beasts. It has made me think that maybe the females are the wanderers, as I don't see many that measure up to the large males. 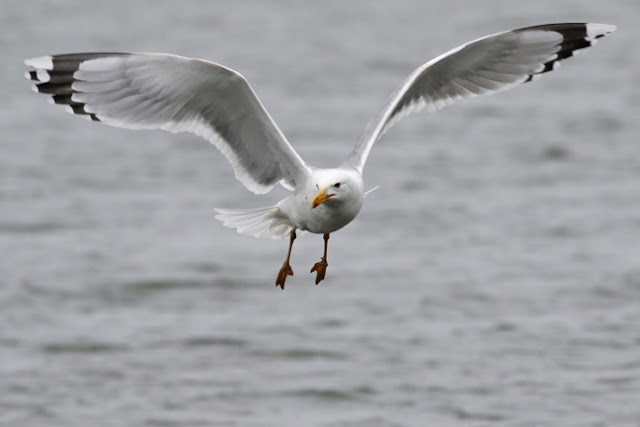 It was a great trip, which gave me the chance to meet some of the guys that I communicate with on a regular basis.

Thanks to Ronald Klien for organising the event.

By the time you read this I should already be enjoying the site of Caspian Gulls doing their long call. I am off to the International Gull Meeting in Saxony this weekend.

I'm most looking forward to the field day and getting some proper images of Caspian Gulls. This opportunity to study a mixed Caspian and Herring Gull breeding colony will hopefully allow me to make better sense of some of the gulls that make my head hurt at Shawell.

The trip will also give me the opportunity to meet up with some of the ringers who I communicate with regularly and also meet a few celebrity gull watchers.

Arrived safely in Bad Düben. Had lots of beer, met some really great people and in between beers we've seen some gulls. This is a nasty place for gulls and you must brace yourselves for some very scary pictures!

Posted by Carl Baggott at 12:00 No comments:

I have now seen this Caspian Gull three times - it first appeared at Shawell on April 2nd and was still there today.

The photos don't really do it justice to be fair. I call Caspian Gulls shape changers, as they change appearance every time they move. Each time I photograph it it looks different.

Its bill at times looked really long and slender, but seconds later it looked unremarkable.

A County Tick, a Couple of Rouzels and a Gleaming White Gull

This morning was the first real opportunity I'd had to dash off after the Great Grey Shrike at Warren Hills. It was raining when I arrived and there was no sign of the shrike. Not long after it had stopped raining it appeared. It was a county tick for me and one to savour. The area north on the main footpath is a real migrant trap best known for attracting Ring Ouzels. This Great Grey Shrike has notched the site up to another level.


It was great to hear Willow Warblers announcing their arrival back in Leicestershire. Also a pair of Wheatears had stopped off at Warren Hills on their way north.

I now had a choice to make, head back towards home to look for the two male Ring Ouzels that Adey Baker had found at The Outwoods, Burbage or head towards Shawell on the M1.

I decided on Shawell as it was the easiest of the two sites to get to. This was a good plan as I found a third-winter Iceland Gull at the landfill site. later on it appeared at the A5 Lagoons. Presumably it was the same one that roosted at Draycote water last night. It was good to see another Iceland gull after the experience with the  juvenile gull that broke its wing.

I finished early at Shawell and headed to Burbage hoping to see the Ring Ouzels at The Outwoods. My luck was in and I managed to end the day in style by seeing both Ring Ouzels. They were a little too distant to get a record shot, but they looked smart through my scope.
Posted by Carl Baggott at 20:50 1 comment:

In my previous post I mentioned that there was a first-summer Caspian Gull at Shawell A5 Lagoons on April 2nd, well it was still there yesterday. It is not always easy to know whether you are seeing a new gull or one you have seen before. At first I thought it was a new Caspian Gull, but after checking I feel its coverts are the same in both sets of images.

Posted by Carl Baggott at 20:50 No comments:

Another Sighting of J727

I wasn't expecting to see J727 again today at Shawell A5 Lagoons, but she was already there when I arrived. There was quite a gathering on the shore, so it was difficult to get a clear view of her to get more footage. Luckily she moved to the far end of the 'beach' and I managed to get a few images.

I put the news out, but only Steve Nichols arrived in time to see her. Those arriving late, although disappointed, managed to enjoy a first-summer Caspian Gull, some colour-ringed gulls and a Red Kite.

The Caspian Gull was very obliging, as it appeared twice more after I first found it.

A Little More on the Baltic Gull

Well my post to Facebook's European Gull Group (now Western Palearctic Gull Group) about my colour-ringed Baltic Gull got some people all excited.

It became bird of the week on Birdguides; featured on RBA's highlights of the week and was well discussed on Bird Forum. Mostly with no communication with me. Chaps it was at least five years old when ringed not a chick. It would have been very much adult like and hopefully easy to identify in the hand. Overall though it was fairly accurately reported.

Though it is colour-ringed, I was more excited about the presumed first-summer Baltic Gull I found last July, but no one even raised an eyebrow over that sighting. That was, if I say so myself, a good find and could so easily have been missed. Perhaps a harder one to comment on?

The first-summer birds description is with the BBRC at present and maybe this colour-ringed adult will give support to it?

The only thing that may hinder the adult is its location, as there has been some queries about whether these Norwegian  gulls are L. f. fuscus. Well the photographs I've seen from the L. f. fuscus colonies in Norway look like Baltic Gulls.

Eight Baltic Gulls L. f. fuscus from Horsvaer, Norway were fitted with geolocators. All of them migrated from Norway through the eastern Mediterranean and all but one ended up down in east Africa (the other stayed at the eastern end of the Med). So they ended up in the same wintering range as Finnish fuscus as far as I can see. A small number of colour-ringed L. f. fuscus have been recorded in western Europe including at least one in the UK and one in Spain (the Spanish one was ringed in Finland).

Morten Helberg in Norway is confident that these Norwegian Baltic Gulls are OK, which has given me confidence too. We must all be careful of what we say from our armchairs and be respectful of people who are much closure to the subject.

Morten has let me have a copy of a photograph that he took of J727 at the breeding Colony.

Anyway I'll leave it at that, as I'm probably boring you all by now.

I'll finish off with the video I took of the first-summer at Cotesbach landfill site in July 2015: