It was perfect timing, my phone went off just as I was pulling up outside home after work - a Night Heron was at Thornton Res. Late news of a small brown unidentified heron at Thornton Res had already been circulated, so it was a great relief to many that the bird had reappeared and been identified.  I set off straight the way and I was pleased to find that it was still there when I arrived. Local Thornton birder Andy Smith kindly gave me a look through his scope - pressure off. This bird attracted most of the keen county birders, some I hadn't seen for ages. Shame that the light was poor due to the fact it was raining but you can't have everything. There have been eight Night Herons seen previously in Leicestershire and Rutland and the last acceptable record was back in 1984.

During the last week, I've made three trips to Shawell A5 lagoons and one to the Cotesbach Landfill site. The gulls seem to have arrived in larger numbers this July compared to my observations during July 2012. Yesterday I recorded 19 Yellow-legged Gulls, which I believe is a conservative estimate as the total was most probably much higher. There are already juvenile Herring, Lesser black-backed, Yellow-legged, Common and Black headed Gulls
present. 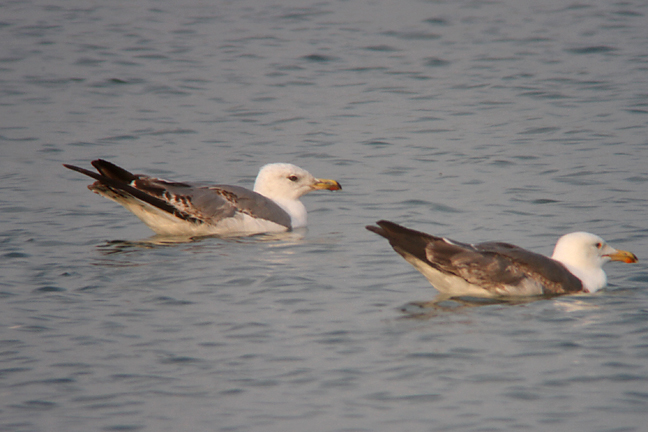 Yesterday's highlight was a third-summer or maybe fourth-winter Caspian Gull, which was at both the landfill site and then later at the A5 Lagoons. Whilst watching it at the landfill site, I was treated to it giving the long call and doing the albatross pose. I managed to catch a couple of half hearted attempts at the albatross pose on video, but unfortunately it flew shortly after I attached my camera to my scope.


The Caspian Gull is the pale grey mantled bird slightly hidden just to the right of centre and then it moves across to the left. Note the black extending into the coverts on the upper wing, which shows it is not yet an adult. The small size of its head and the long slender bill show really well towards the end of the video. So to does the general body shape.

Garsham Roberts on seeing this bird said that Caspian Gulls can never be called ugly and added that this one was really smart  looking - here here!

There was no sign of the Black-necked Grebe this weekend, but I did see it last Wednesday. A juvenile Little Egret was at the A5 Lagoons for a short while yesterday.
Posted by Carl Baggott at 19:35 No comments:

We had a great time in Scotland especially as the weather was fine all week.

I've added a few photos below:

What's Up in Scotland

I've just arrived back from a week in the Cairngorm National Park helping with 'What's Up' and having a blast in the hills. My son, Sam, and I camped at the forest holidays site in Glenmore. We spent our time divided between scrambling (climbing rocky bits generally without ropes), mountain biking, bagging Munros and looking for upland birds.

The main target was to locate and hopefully photograph Dotterels. I have photographed them in spring before, but I wanted to record the young to complete the story. Initially this proved difficult, as the usual site failed to reward me with any sightings. Luckily a second site proved better and I found three family groups along with a 'trip' of 16 adults.


READ MORE
Posted by Carl Baggott at 19:46 No comments:

I've just returned from a week in Scotland and whist I was away, Steve Nicholls found a splendid summer plumaged Black-necked Grebe at Shawell A5 Lagoons. Luckily it is still there and I finally saw it yesterday morning. This is the 199th species to be recorded in the south-west Leicestershire area.
Whilst I was there a summer plumaged Turnstone put in a brief appearance. This is only the second record for the SW Leics List after three together at Frolesworth Manor Lake in 1997.

I will update the south-west Leicestershire list in due course, but I'll wait until the BN Grebe goes.

So what will the 200th species be?

A trip report for my jaunt to Scotland will be posted shortly....

I've been keeping an eye on a couple of pairs of Little Owls close to my home, but not really attempting any photography. A sudden urge to have another go at photographing the birds at the nest came upon me on Sunday morning. I sat in my hide for an hour and a half with nothing to show for it apart from a sore back. Then all of a sudden the hen popped out from deep inside the tree and stood staring at the hide and she looked a bit confused. She didn't stay for long, but I did manage to get my best shot in those few seconds. She was back quite quickly with a juicy worm for her chicks. She was then back and forth with food for about an hour.

I'm feeling a bit weary as I type this. I may have had one too many cold ones whilst taking charge of sausage and burger cooking / burning.

Three cheers for the barbecue weather at long last and of course to the British & Irish Lions for their series clinching win today against Australia.

On my way to purchase the beer for tonight, I somehow found myself in the far west of the county looking for Corn Buntings. I was in for a treat as I found no fewer than six pairs and some of them were taking food to what I can only presume were nests with young in them. The only negative was not being able to find any around Orton-on-the-Hill again. 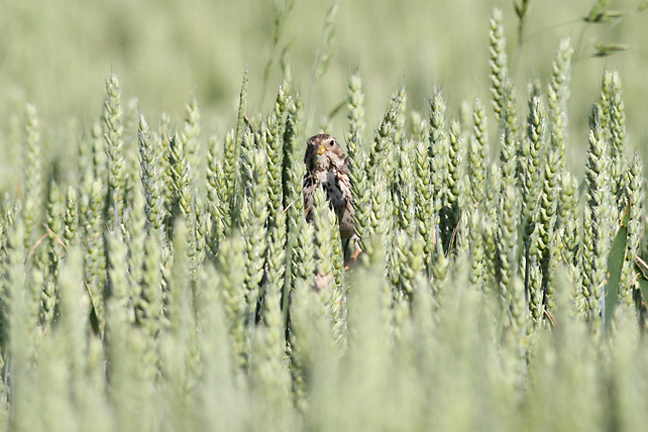 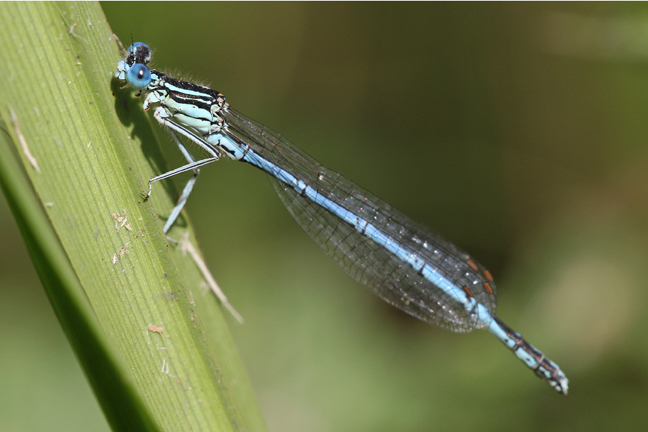 A few dragonflies were also present, but numbers were low. The Four-spotted Chaser below was the most obliging. 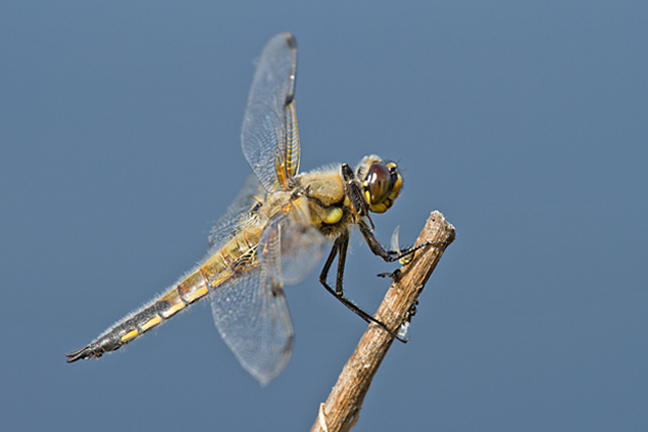 Four-spotted Chaser
Posted by Carl Baggott at 21:22 No comments:

A Real Summer's Day at Last

Last July I wrote Enough is Enough, because the weather was so bad. Now at last it appears we might be about to enjoy a spell of real sunny weather. Today was perfect - warm with clear blue skies and light winds. It was a shame I had to work, but I did have to pass below a Peregrine eyrie whilst going about my business and I just happened to have my camera close to hand. The parents were away and the four youngsters were sitting out on the ledge enjoying the sun. I wasn't as close as it appears in the image below, as it is just the centre of the original photo.


Despite the fact that it's sunny at the moment, the cold wet summers of the last three or four years have had a devastating effect on many bird species and also some insects. Summer butterfly numbers appear to be low and also dragonflies. I have seen a few Meadow Browns and also a few Ringlets, but mostly as single butterflies. Lets hope that British wildlife has a successful breeding season this year. There is a nesting colony of Swifts near my house and the numbers returning have dropped from at least 30 birds a few years ago to just ten this year. It was great to hear them screaming as they flew over my head this evening.

Posted by Carl Baggott at 21:38 No comments: