It's been a good month for waders at Shawell Sandpit. Highlights include a Wood Sandpiper, five Sanderlings and a count of 19 Dunlins. A Little Stint found yesterday by Steve Nichols was a really good find. It was still present today.

The video below shows a Sanderling at first and then the Little Stint wanders in frame.

It had been a while since my last visit to the Cairngorms National Park, but I was back last week. Being busy during the run up to the trip, I had neglected to check the weather forecast. However, I did hear the weather man saying that it was likely to be cold in the north.


Well the weather man was not wrong about the cold and so a world of adventure awaited high up in the mountains. Monday saw Georgina, Sam and myself striding out from the Ski car park. Our first outing was a gentle reacquaintance with winter walking. We chose my regular Northern Corries route starting at the Fiacaill a Choire Chais ridge up on the the plateau east of Cairngorm; and then followed the edge of Coire an t-Sneachda and Coire an Lochain. We descended between Lurcher's Crag and Coire an Lochain to eventually arrive back in the car park.


A male Ptarmigan could be heard 'croaking', as we made are way up hill and luckily he was close to our route.


It was reassuring to see a rescue helicopter was out checking on things, but luckily we were not in need of their help.

The conditions were perfect on the plateau, as the snow was deep but soft and our boots gripped well without the need for crampons. Visibility was also generally good although we did encounter a few cloud patches that drifted over an enveloped us for a short while.


During the week we enjoyed some fabulous days trail blazing through fresh snow and as you can see there were some happy smiling faces.

We still had time for some low level walking in the forest and the Capercaillies were showing well for once although very early in the morning when the light was poor.


The snow fall in the mountains has caused many birds to descend to lower levels. Up to 30 Snow Buntings were taking refuge in the ski car park. 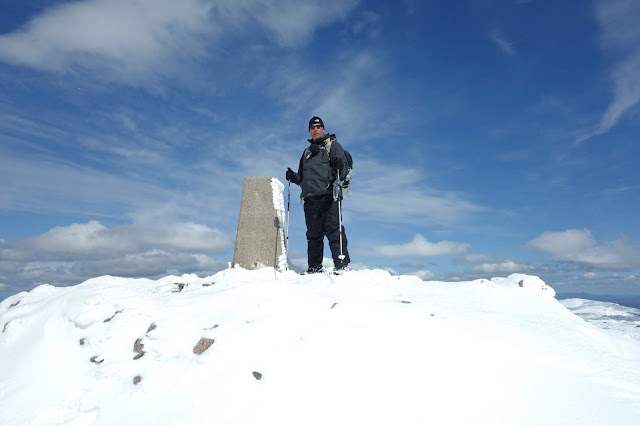 Posted by Carl Baggott at 20:53 No comments: