It was bitter cold at Shawell this morning and very damp.

I persevered until just after lunch, but I was on my last pair of dry gloves by then and the gulls were dispersing, so I gave it best.

There was no rubbish tipping going on, so the gulls were a bit erratic in their appearances on the tip. Nevertheless I had a couple of nice Caspian Gulls including a belter of a second-winter. That one kept moving, so no pics, but a 'short-billed' adult was better behaved.

I moved round to the sand quarry, viewed from Gibbet Lane, and a juvenile Iceland Gull dropped in. At first I thought it was the bird I saw on January 6th, but its markings are different, so I believe it is a new one. A first-winter Caspian Gull was close by making it three for the day.

I had a short while at Shawell again today and I concentrated my efforts on the gulls loafing around in the sand quarry off Gibbet Lane.

The Glaucous Gull I first picked out last Saturday was there again. The light was better and I'm now happy that it is a pure bird with darkish upper primaries. 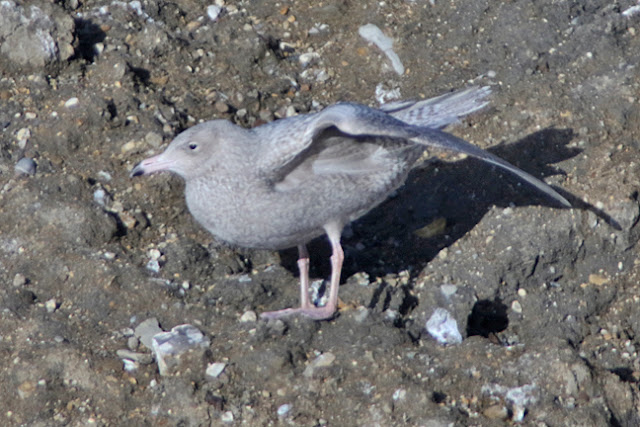 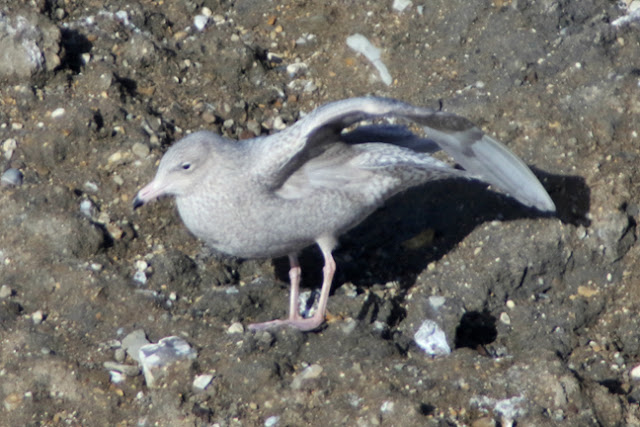 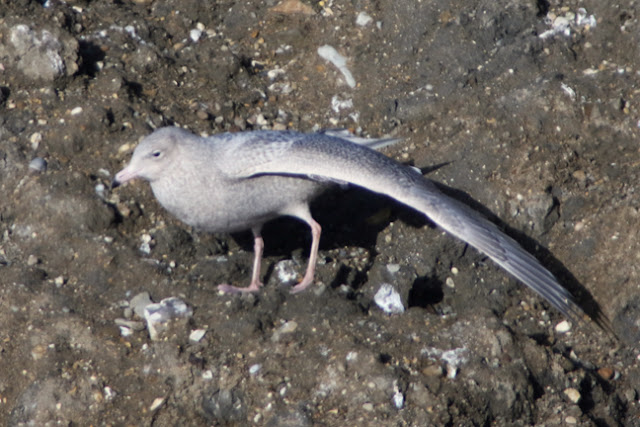 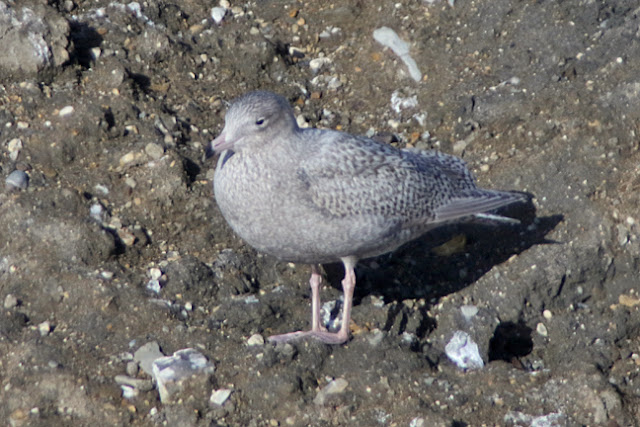 Posted by Carl Baggott at 18:56 No comments:

I have been trying to get some good quality video of the gulls recently. Here is a comparison of first-winter gulls. These are filmed using an adapter that connects my DSLR to my Swarovski spotting scope.

The first one is a first-winter Yellow-legged Gull. This is a fine bird: note the contrast between grey mantle and brown scapulars, white head and black tail bar that tapers at the outside. Also note the new outer greater covert and some lesser coverts.

Next up is a Herring Gull, which is much more juvenile like than the other two species. This one is most likely an argentatus from a northern population.

Last is a Caspian Gull. Note the more elegant profile and the neatness of the bird. The coverts are much plainer than the other two and the mantle lacks the obvious dark markings of the Yellow-legged Gull.

Yellow-legged and Caspian Gulls are born earlier in the year than Herring Gulls especially herring Gulls from northern localities. As a result they mature quicker.

After the gulls had deserted the restaurant many headed into the sand quarry. I altered my viewing spot to Gibbett Lane where I picked up what at first looked like a juvenile Glaucous Gull. However, as it moved closer I could see that its primaries were a greyey brown colour and the pattern on the underparts were a little odd and recalled a first-winter Herring Gull. My assumption is that it is a hybrid Glaucous x Herring Gull or a Viking Gull. It was quite a smart beast and structurally it was spot on for a Glaucous Gull. It's a shame it wasn't closer in better light.

I placed the bird on Facebook and an Icelandic birder commented that in his opinion it is a pure Glaucous Gull.

Yes, this one is imo pure glaucous. The primaries have all similar shading, apart from P7 and P10 which is whiter. This brown wash of the primaries is often much more variable (perhaps even the rule!) than for this individual. It does not appear to have darker tailband than the rump. Such brown wash over the primaries is also typical for many dark Iceland gulls. 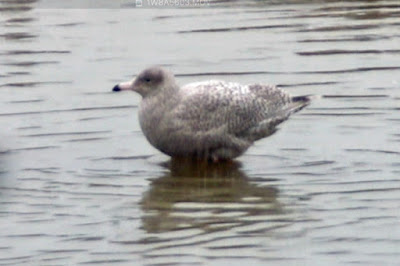 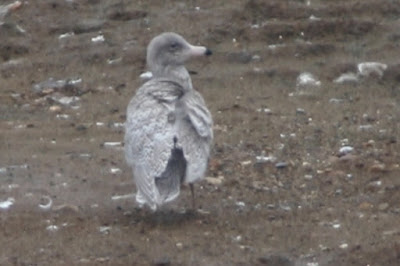 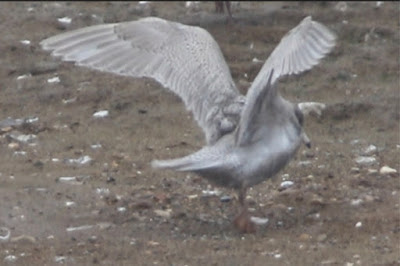 It was raw at Shawell today. It rained or sleeted all day and the temperature struggled to climb above zero. However, my viewing spot at the tip is closer to the gulls than ever before. I was able to take photos of three different Caspian Gulls, although in total I saw seven or eight - an adult, three second-winters and three or maybe even four first-winters.

The photos were taken using my scope as the lens. The scope was set at 30 x and I had to use ISO2000 due to the appalling conditions.


I also took some video of one of the first-winters and I am very pleased with the quality.

A brute of a Glaucous Gull was at Shawell today, which kicked off my tally for this species for 2018. It's one a piece for Glaucous and Iceland so far.

Early on the tip was smothered in gulls, but there was no fresh food being delivered today, as it was shut to waste lorries, so the gulls soon began to disperse.

Many gulls were loafing in the fields between the tip and Shawell village. Scanning through them revealed a few colour-ringed birds and an adult and first-winter Caspian Gull. My tally for Caspian Gulls for the day was six - two adults, and single fourth, third, second and first-winters.I was a bit disappointed that no white-wingers were with them, but hold on a minute what is that it the dip in the field. It was a juvenile Glaucous Gull. After the gulls were flushed by a couple of dog walkers I returned to the tip and the Glauc was there.

Enjoy the video but at HD quality remember.

Last weekend's mission to find some gulls failed due to flooding and some very sticky mud. I lost a welly and nearly myself and my scope. So with new wellies and a can do spirit I returned hoping for better results. The flood water had receded and although the mud was still there I managed to avoid the worst of it and take up my usual hard won spot at Cotesbach landfill site.

Many thousands of gulls were there. I couldn't really estimate just how many, as massive flocks would just appear and then disappear behind the humps in the sand quarry. I would say that there was at least 7000 Herring Gulls, plus the other regular gull species. It was quite a sight when they all took to the air.

Anyway it was white-wingers that I was after, but Caspian Gulls entertained me early on. Seven today around Shawell - three first-winters, two second-winters and a couple of adults. The one below was a real eye-catcher.

Around mid-morning an Iceland Gull came onto the tip to feed. It was quite a showy bird and I saw it at several locations around Shawell. Best looked for at the A5 Lagoons. I initially assumed this was the second-winter that has been roosting at Draycote Water, but now I think it is most likely a first-winter. Its bill matches first-winter better than second-winter. The dark tip bleeds into the base whereas second-winter bills are clearly demarcated between the black tip and the whitish base. Also it eyes are still dark. So most likely a faded first-winter.

As I've said before, the landfill site is a dangerous place and is out of bounds. My access is not guaranteed and I have to renew my permission on a weekly basis.

Posted by Carl Baggott at 19:09 No comments: