All those listed below are considered to be different individuals, however, some duplication is inevitable:

Posted by Carl Baggott at 18:27 No comments:

Brascote Pits is once again festooned with orchids.

I remember visiting Ketton Quarry many years ago to see my first Bee Orchid, but Brascote Pits to the west of Leicester puts Ketton into the shade with the numbers of orchids present.

Whilst I was up in Scotland I took an early morning stroll into the forest. I was pleased to see a Crested Tit and half-a-dozen crossbills. Through the trees I could see a lochan (small lake). A path snaked its way through the trees to the waters edge, so I followed it. I disturbed a small wader, which flew to the other end of the lochan. Through my binoculars my first thought was Wood Sandpiper. Apart from Common Sandpiper this was the obvious choice, as they do breed in the Highlands in small numbers and the forest habitat seemed right for this species. I decided to walk back to my car and get my scope, as I felt I needed a closer look.

It was a good job I did, as it turned out to be a Green Sandpiper. I took some video to confirm the sighting.

The Highland Bird Recorder described it as an exceptional record as they only get one or two in the Highlands on passage each year (sometimes none) and this one was recorded during the breeding season. He initially questioned my record before I sent him the photo below. 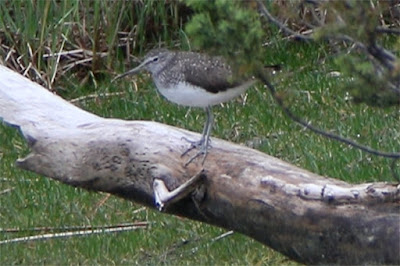 Posted by Carl Baggott at 20:25 No comments:

It had been a while since my last trip to Scotland and I was itching for a bit of peace and quiet and excitement.

The weather forecast for the latter part of last week looked good for an overnight adventure in the Cairngorm Mountains. I hastily arranged a few days off work, found my kit and jumped in the car and headed north.

I set up base camp at Glenmore near Aviemore. Once that was done I headed to the ski car park and into the hills, but not before filling out a form in the Mountain Rangers hut just in case something drastic happened to me. My rucksack was a little heavy with tripod, camera, food and drink plus tent stowed inside. I had only just left the car park when I spotted a very pale warbler. It's bill was quite orangey and it looked a little larger than a typical Willow Warbler. I spoke to another birder later in the day and he said that it was most likely a Northern Willow Warbler.

It was very hot and I soon began to feel the effects of carrying my heavy pack. My route took me past the magnificent Corrie an Lochan. I always feel the urge to get out my camera and take a few images at this point. It was around here that I encountered the first Ptarmigan.

After a quick drink I continued upwards towards the plateau. Near the plateau I felt a searing pain in my right thigh. It wasn't cramp as the pain wasn't right for that. I decided to try and walk it off and luckily the pain began to subside. I had an idea where I was going to camp, so I limped off across what I call the 1083 plateau. I chose a campsite close to the edge of the Larig Ghru: a chasm, which cuts through the Cairngorm massif. The area was one of the few locations where the ground is flat enough to be comfortable to sleep on. It was warm, so I had only brought my outer tent and a sleeping bag. 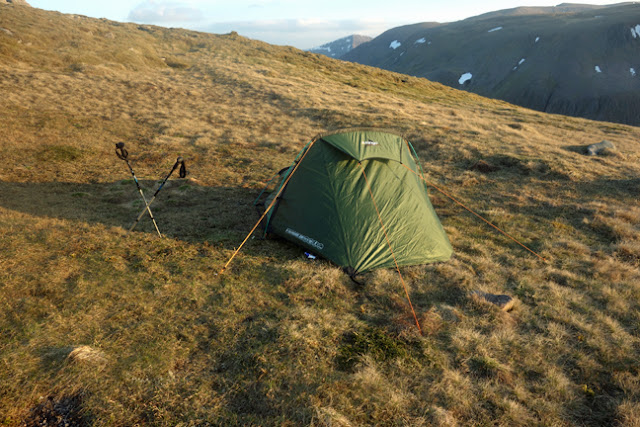 I left all of my heavy kit in the tent and started searching the plateau for birds. A pair of Ptarmigan were feeding quietly close to my campsite. I stopped to photograph the female, as females are often harder to find during summer.

Just south of Cairn Lochan I found a pair of Dotterel. The male was keen to defend his female and always made sure he put himself between me and his mate. Another female was close by and in total I saw five individuals - three males and two females.


Dotterel are having a hard time in the Cairngorms especially in the more accessible places.

By know it was almost 9.00 pm and I had the plateau all to myself. I planned to be back at my tent to enjoy sunrise and a miniature bottle of Glenfiddich 12 Yr. Off in the direction of my tent I could hear a Snow Bunting singing. It was perched on top off a small cairn. It was a friendly chap and remained there singing whilst I sneaked up on it.

Back at my tent I watched the sunset and drank my whisky. As the sun was setting I noticed some cloud oozing across Breariach and down into the Larig Ghru. As it did the wind started to pick up. 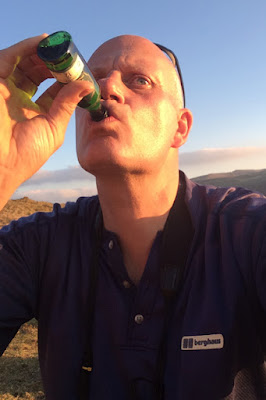 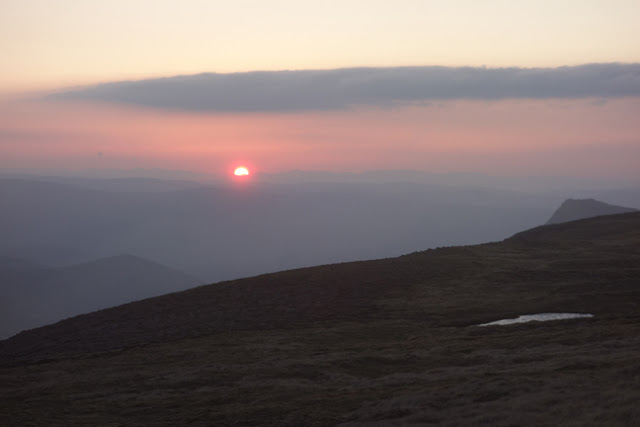 I retired to the comfort of my tent, but the wind speed was increasing all the time. The tent was being buffeted quite severely and despite using anything I could to block the gaps it soon became quite cold. My sleep came in fits and starts, but by 3.00 am I'd had enough of being woken up by the wind and decided to head towards the summit of Ben Macdui. If I moved quick enough I would enjoy the sunrise although I'd run out of whisky. 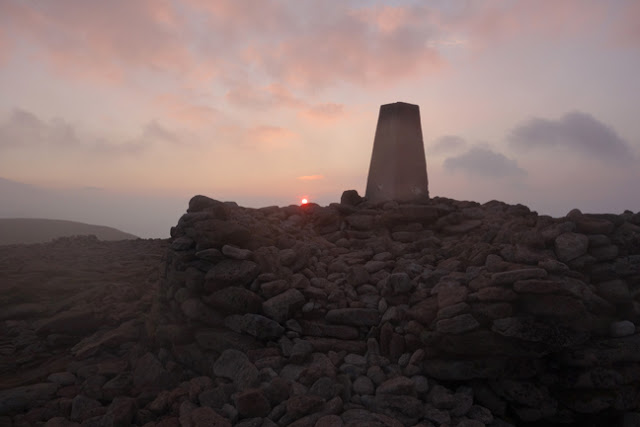 Just a singing Snow Bunting and I were in place to watch the sun come up above the summit cairn of Britain's second highest point.
Posted by Carl Baggott at 21:57 1 comment: