A Bit of Perfecting the New Trail Camera.

After looking at the first batch of photos from my new camera trap I decided to do a bit of a re-jig.

I have altered the angle to catch more of the foreground and rearranged the tyres a bit.

I swapped the memory card over and checking the images I was surprised to see a Raven perched on the big tyre. Not the rarity it once was but still a good catch in the first week. 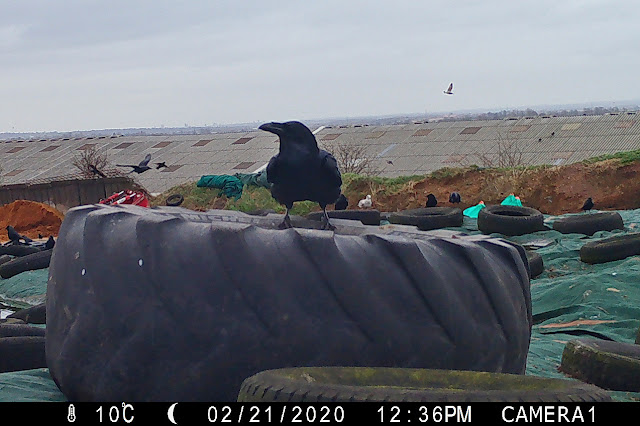 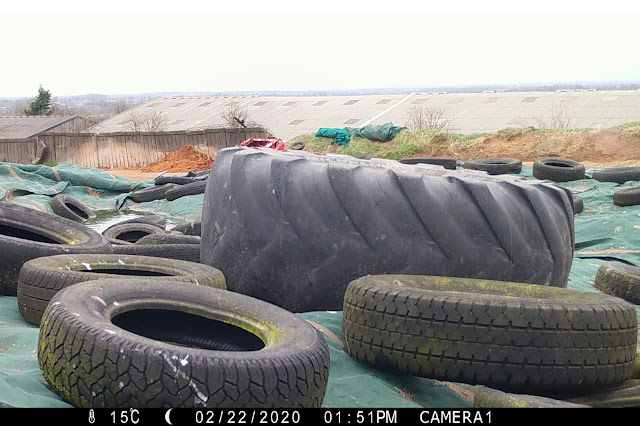 New Layout
Posted by Carl Baggott at 21:10 No comments:

Having spotted up to 800 gulls loafing about near a farm, I decided to take a closer look. The gulls appeared to be feeding near to the farmer's barns, so I contacted him and asked him if I could place a stealth camera in his farmyard. He was a decent chap and he said yes.

I did some research and decided on purchasing the Browning Recon Force Edge from the Nature Spy Shop. This offered all the settings I needed including the ability to set the time period the camera works for. This saves on battery life.

Once the camera arrived I set about making a secure box to house it in. An old metal electric box was perfect after some modifications. I am really pleased to say the camera was bone dry despite the horrible weather we have had over the last few days.

Anyway I retrieved the camera first thing this morning after three days. The batteries were still doing well at 75% and it had recorded something.

I swapped the memory card and secured the camera back in its box and left it to do its work.

Once downloaded I was pleased with the results although perhaps for reading rings the camera needs to be closer to the big tyre. I did move the tyre slightly, so we'll see next time.

The hope is that I will be able to read some colour-rings, but that will take time I think.

Here are some of the results: 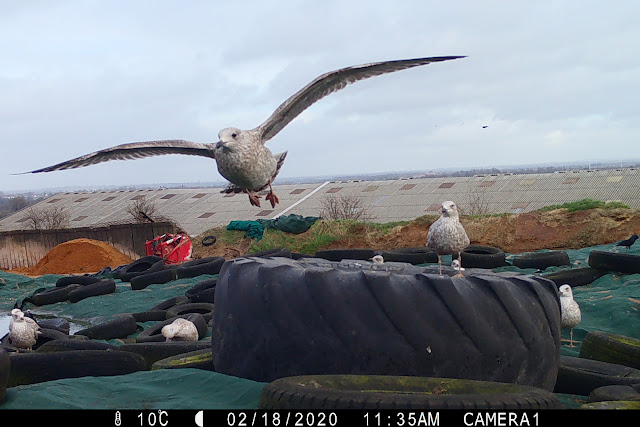 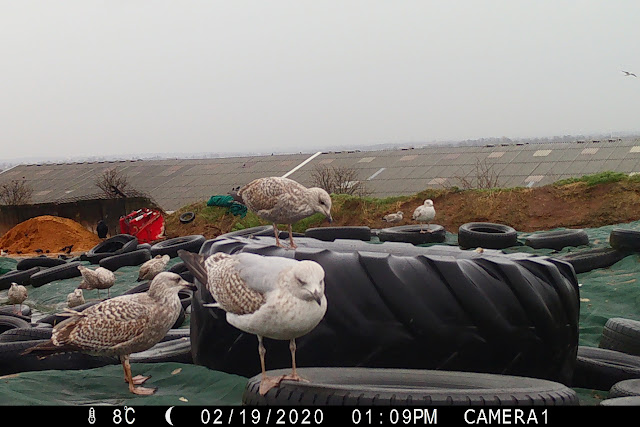 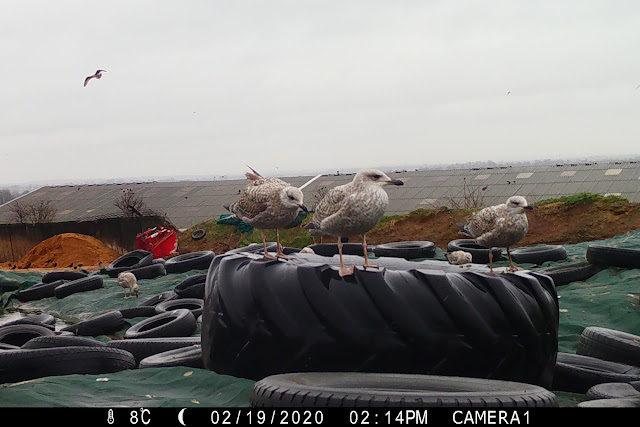 Posted by Carl Baggott at 21:09 No comments:

Review of White-Winged Gulls at Shawell

I have updated the report on the 'White-winged Gulls' recorded at Shawell.

To see the report as a PDF CLICK HERE

Posted by Carl Baggott at 21:35 No comments:

Another Good Day at Shawell

The last few Saturdays at Shawell have been poor, but this one proved a bit better.

I arrived just after 08:00 an already gulls were at the sandpit. A 'wave' of gulls appeared from the right and amongst them was the third-winter Iceland Gull, first found by Steve Lister on Thursday, and the subject of my last post.

The third-winter Kumlien's Gull also put in a brief appearance, but I only saw it on the ground facing me and then in flight.

A pair of Pintail were a welcome sight as the last record of a Pintail in this area was in 2017. A Barnacle Goose was with Canada Geese at the A5 Lagoons.

This new Iceland Gull was spotted by Steve Lister at Shawell yesterday and luckily it was still present today when I sneaked over.

It's quite a large bird, equal in size to many Herring Gulls and just like many 'white-wingers' it sits high on the water. It is most likely a third-winter based on its plumage and its very pale eyes. However, its bill is more second-winter like. Ageing gulls can be tricky and is often more of an educated guess. Colour-ringed birds show how difficult it can be. Some age fast and others slowly.

Its round head, long primary projection and greenish bill rule out Glaucous Gull. 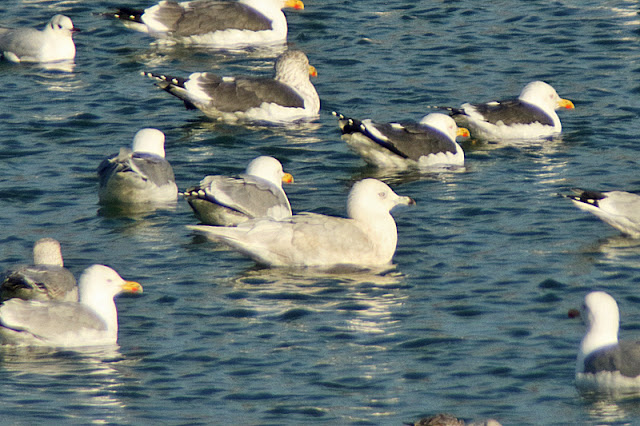 Posted by Carl Baggott at 18:53 No comments:

Another lunchtime at Shawell once again produced the goods. Lots of gulls were loafing on the steep banks and so I began harvesting colour-rings. Twenty in the notebook in the first half an hour was a great result, but then something created panic and the birds left the banks and huddled together in a noisy mass  on the water. I scanned the flock and struck lucky when I spotted the long staying third-winter Kumlien's Gull. It is looking a fair bit paler than when I first saw it on December 28th 2019. 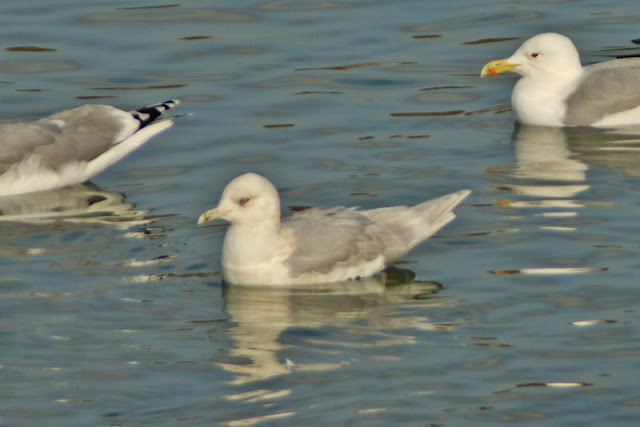 There was no sign of the third-winter Glaucous Gull whilst I was there, but a couple of Caspian Gulls were amongst the gulls, which were mainly Herring Gulls.
Posted by Carl Baggott at 19:30 No comments:

After a poor show on Saturday due to no tipping I was compelled to go to work early in order to get over to Shawell again at Lunchtime.

The first interesting gull I spotted was a giant of a Caspian Gull, which I first saw a few weeks back. It matched the Great Black-backed Gulls in size. 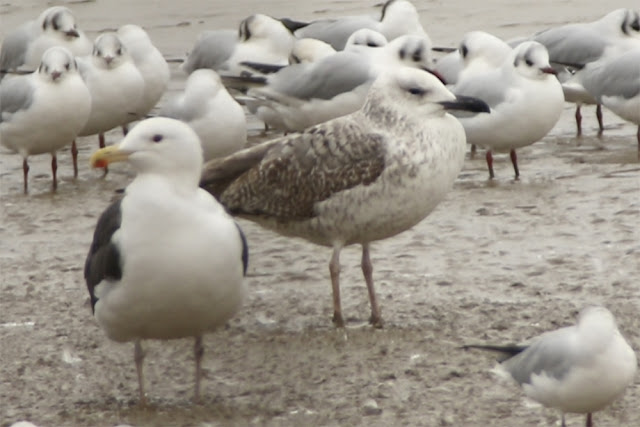 Next was a large Herring Gull that I have seen a few times recently. Apparently it was identified as a Glaucous Gull today, but it is most likely a Herring Gull with faded bleached primaries; certainly not a Glaucous Gull. The primary projection  is too long for a Glauc to start with. 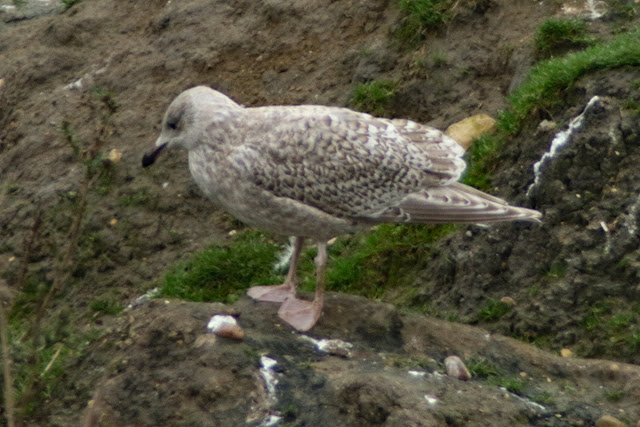 Anyway, the pièce de résistance was a new Glaucous Gull. A tricky one to age, but the obviously pale eyes, faded black tip to bill and the amount of adult like grey feathering on the mantle, scapulars and some coverts led me to conclude it is probably a third-winter. 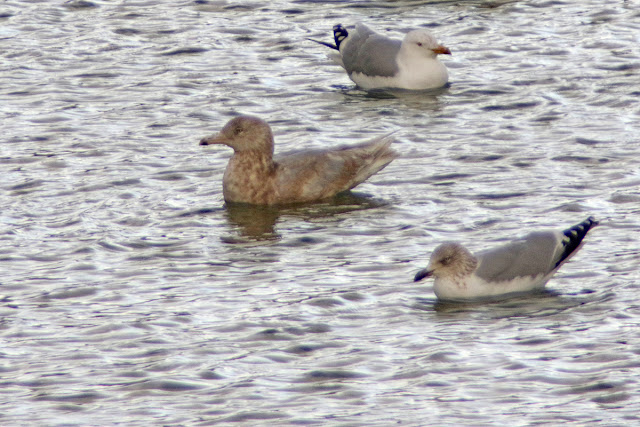 Posted by Carl Baggott at 21:29 No comments: