I soon gave up at Shawell this morning, as there was no tipping, the gulls were mobile and the weather was awful.

I decided to head off towards home and have a quick look at Brascote Pits. Despite the weather some warblers were singing including a very loud Lesser Whitethroat. I noticed a tern over the 'Mars Landscape Pool'. As I got closer I could see it was a Common Tern. There wasn't much else on the pool, so I retraced my steps back towards the footpath. As I neared the footpath I decided to swing right along the western side of the 'Beach Pool'. Something made me look back towards the 'Mars Landscape Pool' and I was surprised to see a drake Garganey in the centre of the pool. Fortunately it stayed until Adey Baker and Colin Green arrived and it was still there when we left the site.

This is only the third record, involving five birds, for the SW Leics area:

I've had a few good few days since my last post: highlights being the arrival of many spring migrants including a singing Grasshopper Warbler near Huncote. This species is very scarce in my local area, especially for me as I can hardly hear them anymore. Adey first heard it and we both saw it briefly.

The Caspian Gull 'Larry' reappeared at Stoney Cove for a couple of days, which was a surprise.

The regular juvenile Iceland Gull was still at Shawell on Saturday, which extended the latest date by a bit more. Hopefully it will stay a bit longer.


Finally a colour-ringed Caspian Gull from Germany was also present in the sandpit - X935.

Posted by Carl Baggott at 19:39 No comments:

A few posts back I predicted that the latest date for a 'white-winger' at Shawell would be beaten this year. April 15th 2017 was the latest sighting to date. Steve Nichols and I recorded two Iceland Gull on Saturday,  but that was only the 14th. I received a text from Steve this afternoon with photos of a Glaucous Gull he'd found in the sandpit off Gibbet Lane. Steve had broken the record, but I wanted to share in the fun, so I went over to Shawell after work.

There was no sign of any 'white-wingers' in the sandpit, but there was plenty of gulls, so there was a chance it would return. I noticed a large flock of gulls circling above the landfill and amongst them I could see a very white gull. Luckily it headed for the sandpit where it joined the resting gulls. It was a second calendar-year Glaucous Gull - pale tip to its bill, but its wings are very pristine and so only a youngster.

Eventually I was a able to enjoy a fly past of this massive beast and also close infront of it was the regular juvenile Iceland Gull.

This morning I tried a few sites close to home. At Brascote Pits one of the male Ring Ouzels was still lingering and it showed well but briefly in an Ivy covered tree close to the double gate that leads to the 'Beach Pool'.

After there I tried a site near to Kirby Mallory where I was delighted to flush a Jack Snipe. This is the first sighting, as far as I remember, since 2010 in the south-west Leicestershire recording area.

Before arriving at Brascote I had headed out west and at Norton-juxta-Twycross I spotted a pair of Grey Partridge, which is nice these days.

I spotted this beast yesterday. Its plumage is OK for a Caspian Gull, but structurally it seems to be a bit mixed up. Its short legs, chunky body and largish head hint at Herring Gull, but equally there is a bit of Caspian Gull about it too.

It is a second calendar-year, first-winter/summer. At this age Herring Gulls haven't replaced their coverts, but this chap has, which is a feature of Caspian Gull, as is the white head and the silvery grey scapulars.

For me this is quite an obvious hybrid.

Spring Weather with a Little Ice

Already this has been the best 'white-winger' season ever at Shawell. Five Glaucous and 13 Iceland Gulls, but could I add to the list today?

The gulls had already assembled in the sandpit off Gibbet Lane when I arrived this morning. It didn't take long to find the first Iceland Gull - number 14!

It was pure white and I could just see it had a pink tip to its bill, so it was most likely a second-winter.


Later on the juvenile seen previously on April 5th and 7th appeared and promptly fell to sleep. Later it was at the A5 Lagoons. 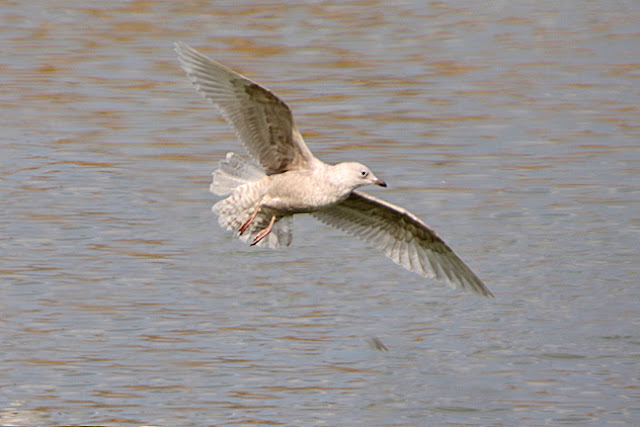 Posted by Carl Baggott at 21:28 No comments:

Steve Lister saw a juvenile Iceland Gull at Shawell on Thursday , which we  initially thought was one of the birds that had been around for a while. However, yesterday lunchtime I was passing, so I had half an hour looking at the gulls and luckily a juvenile Iceland Gull dropped in. Its outer primaries were browner than the rest of its primaries, which was very distinctive and it was definitely a new bird. Today I saw Friday's bird and another new juvenile. The new one had a pink base to its bill, which Steve's bird had, so it could be the same one. We may well be up to 12 Iceland Gulls for for the the 2107/2018 winter now.

As well as the 'white-wingers', at this time of year I'm looking for Baltic Gulls. Especially the colour-ringed bird I saw in 2014 and 2016. I spotted the bird below, which must be one, but without a colour-ring no cigar!

After reaching a total of 101 different birds last year, I have decided to just record day counts from now on. It was becoming increasingly difficult to separate individuals especially amongst the juvenile/first-winter birds that change rapidly.

Posted by Carl Baggott at 19:39 No comments:

It been another good year for White-Wingers at Shawell and I was thinking when are the best times for finding one. Below is a graph showing the finding month of all the Glaucous and Iceland Gulls sighted at Shawell so far. I thought that Iceland Gulls generally arrive later than Glaucs, but as you can see either can turn up at anytime during the winter months. There is, however, a peak in January for Glaucous Gulls and March for Iceland.


Judging by the numbers of Iceland Gulls seen so far I wouldn't bet against breaking the latest date for the site. The latest date is April 15th 2017. 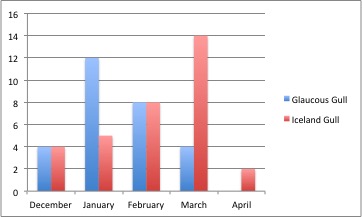 Posted by Carl Baggott at 19:49 No comments: