The forecast I read for yesterday suggested a bit of rain would fall around mid-day and there was a hint that some parts of the country would receive higher than average rainfall. Well, what happened to some areas was almost beyond belief. During the morning I had a conversation with a work contact from Telford who told me they had had a hail storm earlier. The skies were  beginning to darken, so I told him his weather had nearly arrived. During my lunch break I chose to sit outside and it got progressively darker until it seemed more like early evening. A thunder and lightening show ensued and I could clearly see a storm was raging to the west.  Initially the thunder growled on for ages. As a precautionary step I took my backside off the large metal beam I was sat on.

Luckily the storm passed by Stoney Stanton, where I was situated, with just a little rain. Meanwhile the gods had chosen to take their wrath out on others. In Burbage hailstones the size of golf balls and some even the size of tennis balls, but shaped more like the business end of a knights Mace, were wreaking havoc. Cars were damaged beyond repair, conservatories were demolished and roofs and guttering were punctured. Local businesses were flooded as were schools. In Earl Shilton and Barwell a similar story unfolded. My house survived pretty well, but one of my windows was found wanting and water flooded in through the seal. Luckily that soon dried out. It appears that many parts of Leicestershire were effected.

I have spoken to one person who has had two cars written off by the hailstones and many tiles on his roof destroyed.

One can only guess at the impact this has had on our already beleaguered wildlife. As I have said previously, the insect species especially butterflies are being hammered. Luckily by early evening the sun was shinning and I was out checking on some of the owls that I have been watching. Fortunately I found some of the juveniles seemingly none the worse for the experience.

For those that suffered at the hands of this freak weather, you have my sympathy. For others just watch this video that I found on youtube - CLICK HERE


This unusual weather was apparently created by warm air moving up from Spain and Africa, which met up with colder and damper air from the west. This meeting took place over Central England. A Tornado was reported from other areas in the county, but this has yet to be confirmed as the damage has to be investigated before official recognition can be given.
Posted by Carl Baggott at 21:28 No comments:

A couple of days ago I noticed a lot of white fluffy down on a tree close to one of my Little Owl sites.  I have occasionally seen a Barn Owl hunting nearby, so further investigation was called for. It took me couple of nights to spot the owners of the fluffy down, but it was well worth the hours spent quietly watching. Two, almost ready to fly, Barn Owl chicks appeared from out of a large cavity in the tree just before dark last night. Also an adult was hunting over the field behind the tree. I managed to get a few decent images despite it being almost  too dark for me to see the birds with the naked eye (ISO 2000 needed). I also took a short section of video showing the chick practising its funky dance moves. This is a significant find as Barn Owls are still scarce in the south-west of the county.

I have finally, with the help of Adey Baker, created the 'South-West Leicestershire Bird List'. The list is an account of all the species recorded in south-west Leicestershire that are considered acceptable by the authors. Whilst compiling the list we have found some very good records which hopefully will be found acceptable by the LROS records committee in due course.

If the list doesn't work correctly on your pc email me at cdbaggott@gmail.com and I''ll send you a copy of the pdf file.
Posted by Carl Baggott at 19:02 3 comments:

More Hiding From the Owls

Normally adult Little Owls are very wary when a hide suddenly appears in their territory, but I was thrilled to see one of the adults right in front of me this morning. After a wait of over an hour, a chick (there only seems to be one at this site) appeared and it was obvious from its excitement that one of the adults was nearby. The youngster disappeared back down into the nest when some horses galloped by. I took the opportunity to reach for a drink and when I looked back an adult had appeared. The adult promptly went to sleep, so I had to wait for my shots. In the end the youngster joined its parent on the same perch. 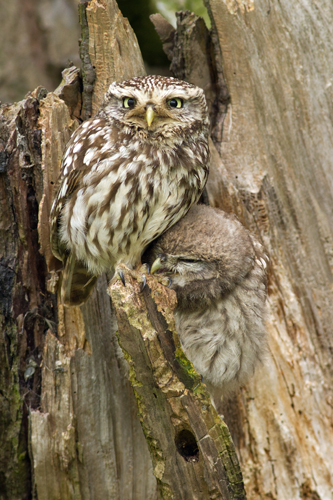 I was pleasantly surprised to find out that two of my photographs have been used in June's issue of Birdwatch magazine. You may have gathered from my blog that I have a bit of a thing for the Cairngorm mountains, so I'm really pleased that both images were taken there. I've had other photos of the same female Dotterel published  in Birdwatch magazine previously, so she's becoming quite a celebrity. I remember the encounter well: I heard a bird calling distantly and when I eventually found its source it turned out to be a stunning female Dotterel. Eventually she attracted a male and lured him away for some privacy, but not before I'd got my photos. It is moments like this that makes being a wildlife photographer worthwhile.

I also had a photo of a Ptarmigan in June's Birdwatch magazine - very pleased.

Below are some of the photos that have appeared in Birdwatch:

Although I really wanted an extra hour in bed this morning, I forced myself out and was rewarded for my efforts. I tried a different site and almost from the minute I settled into my hide a young Little Owl appeared from out of the nest. It wasn't long before one of the adults arrived, but it remained in cover calling to the youngster. Only one chick was visible, but it had plenty of energy to climb around the tree.

Posted by Carl Baggott at 21:47 No comments:

This morning I managed to get my first half decent photo of one of this year's Little Owl chicks. I was in my hide again for a couple of hours before work and at least one of the chicks came to the nest hole and the adult female also put in an appearance, but the light was a bit poor whilst she was posing.
Another session this morning (15/06/2012) produced almost constant views of two chicks and the female was ever present and fed both chicks. I thought the female was going to make me late for work as she wouldn't disappear and let me leave the hide unseen. She eventually flew off, but the chicks watched me emerge from the hide and were unconcerned by my presence.

The nest is quite close to a busy road, but if you listen carefully you can hear the youngsters calling.
Posted by Carl Baggott at 22:45 3 comments:

Summer Returns For a Few Hours

Waking up to sunny weather gave me a bit of a headache this morning - what should I do? Should I go in search of insects, go owling or revisit my sites in west Leicestershire. Little Owls won the early battle, as I returned to the site where I saw the juvenile last night. I didn't have to wait too long for mum to put in an appearance at the nest hole.
After the first showing, the owls didn't want to play, so I left the site and met up with Adey Baker at Croft. We had a fruitful walk around the hill and quarry. The highlights were 14 Bee Orchids, a pair of Grey Partridge, a Kingfisher and two Grass Snakes that were out sunning themselves.

After that I went over to the Ashby Canal at Dadlington in search of White-legged Damselflies. I did manage to see an adult and two immatures, but compared to other years, at a similar time, this was very disappointing.

My last port of call was Brascote Pits where there was good numbers of damselflies, mainly Azures and a few Red-eyed Damselflies.
I also saw my first Dragonflies of the year at Brascote Pits - a couple of Four-spotted Chasers, but I had no look photographing them today. However, I've included a photo of one from a couple of years ago.

Posted by Carl Baggott at 20:08 No comments:

Going in the Right Direction

Earlier today I visited Brascote Pits and while I was there I met up with local birder Dave Taylor. Dave reminded me that there have been records of Bee Orchids at the site in previous years, so we decided to check out the area where we thought they might be. Dave spotted the first and then I quickly spotted another two. The weather wasn't really that good, so Dave took a quick record shot of one and I vowed to return later in the day as the weather was supposed to improve.  Birds seen included a single Redshank, a pair of Gadwall and several LRP's.

The weather did improve, so I went out this evening and photographed the orchid and I checked out three Little Owl sites: at the first there was no sign of the owls; at the second one of the adults was perched on the weather vane above the barn and at the last an adult flew into to what I suspected was the nest and a juvenile appeared at the entrance. This was my first view of a juvenile this year.

More Hiding From The Owls

Through my rose tinted spectacles, I can remember a time when summer meant long sunny days spent trying to photograph butterflies and dragonflies (I mean doing some work on the outside of my house). The weather at present is far from perfect for insects and although the weather improved slightly last year, the generally poor summer weather in Britain over the last four years has had a dramatic effect on the local butterfly and dragonfly populations. I hope to have a walk along the Ashby Canal at the weekend if the weather improves sufficiently to try and gauge how the White-legged Damselfly is doing there.

I noticed that John Hague had had a good session the other day on the Grantham Canal recording Variable Damselflies and Hairy Dragonflies Click Here.

Posted by Carl Baggott at 07:27 No comments: